The Media Shames Itself with Easter Stupidity

RUSH: You know what the second most threatening assault on our culture and society is? Stupidity. The stupidity or ignorance, I don’t know what you want to call it, of many Americans who don’t even know the foundational things that make up Western civilization simply because they’re no longer taught.

Have you ever looked at what the Washington Post or the New York Times write about Easter? I paid attention to this over the weekend. It is astoundingly embarrassing. NPR. They did a report on Easter. They haven’t the slightest idea what it is. And it’s only the bedrock of the Judeo-Christian ethic here that forms one of the serious foundations of Western civilization.

You know, there’s an anti-Christian sentiment throughout the American left today, and it permeates the media. They don’t even know what Easter is! A guy named Jon Meacham — does that name ring a bell? Jon Meacham used to be the editor of Newsweek. He’s considered one of the world’s greatest presidential historians. He doesn’t even know the story of the Trojan horse! He got that wrong! He has no idea.

Okay. So I said contingent instead of contiguous, whatever, when describing — who’s calling you? You got the speech police bugging you on the phones? Well, I know they’re annoying, these know-it-alls. This is the equivalent of a typo here, not a lack of knowledge. Contingent, I said. Contiguous is the correct word. I could blame it on a staffer who wrote the wrong word for me, but I’m not gonna do that because I don’t slough it off on the highly overrated, arrogant, conceited staff who think they know everything. I’m not gonna do that. I’m gonna take the full hit for screwing up contingent versus contiguous.

And I have not lost my place here despite having been distracted. Jon Meacham, Meacham, don’t know how you pronounce it, doesn’t even know the story of the Trojan horse. Got it dead wrong. But the point is, he’s a heralded, supposedly world-renowned presidential historian. He’s just a leftist journalist. And I’m telling you, journalism, they’re not teaching history. And they certainly aren’t teaching the fundamental elements of Western civilization in American history.

I don’t care, you’re not a Christian, fine. You don’t believe in Christianity, fine. But you have to know what Easter is. You have to know that is a holiday, it’s a celebration of the vast majority of the population of this country and always has been. You can sit there and say as a journalist that you’re not Christian and that you don’t like Christians and you think Christianity is a bunch of bugaboo. But you have a duty as a journalist writing about these things to know what it is! And they haven’t the slightest idea.

I’m telling you, folks, the abject — I don’t know another word for it. Stupidity. It used to be you would say ignorance; they just don’t know. But I don’t think it stops at ignorance, because there’s an arrogance to this ignorance. There’s almost a being proud of not knowing various things. I just think it poses a tremendous problem because so many people still access Drive-By Media for historical reference points, and the people that are being hired into this business themselves have not been taught or they have and they reject it.

But, anyway, I think this stupidity is also a great threat to the survival of what I consider to be a distinct and unique human culture, American culture. It is distinct and unique. And contained within it is the concept of American exceptionalism. The Morning Update today. There’s a woman in Sacramento, she’s selling her house, 60-year-old house, has antique furnishings in it. So she put it up for sale. And as long as you are not a Trump supporter, you can bid on it.

But if you’re a Trump supporter, this woman is not gonna sell it to you. So we looked at fair housing laws. And there’s nothing in the fair housing laws that says you can’t discriminate against people on the basis of politics. You can’t discriminate on the basis of race or religion in making a decision who and who not to sell your property to. But not when it comes to politics. So this woman’s free and clear.

But what percentage of the market is she eliminating? She wants to sell her house. She isn’t gonna live in her house after she sells it. And yet she’s obsessing over who is. And she cannot bring herself to sell it to somebody that supports Trump. To me that’s just stupid. Sure she has the right to do it, but what kind of effect is that having on the price that she could get for the house? I find all of this stuff funny.

Here is how the NPR blog described Easter.  Ready for this?  “Easter — the day celebrating the idea that Jesus did not die and go to hell or purgatory or anywhere at all, but rather arose into heaven — is on Sunday.”  That is the NPR! This is what liberals swear to and they swear by it.  NPR is their primary source authority.  Let me read this to you again.  This is NPR’s blog describing Easter.

Quote, “Easter — the day celebrating the idea that Jesus did not die and go to hell or purgatory or anywhere at all, but rather arose into heaven — is on Sunday.”  So according to NPR, Jesus was wandering around one day after coming off the cross and just shot up to heaven!  Didn’t go to Purgatory, didn’t die, didn’t go to hell. He just shot up there to heaven. He rose up there and a bunch of stupid, idiot Christians are gonna celebrate this or something like it on Sunday.

Now, as I say, I totally understand people that are not Christian.  I think this anti-Christian fear — and that’s exactly what it is, and it’s been the growing, and it’s been going on really intensely I’m telling you for it is last 30 years, if not before.  There’s always been an anti-Christian bigotry in this country, but they were the minority.  But now it’s swelling, and it is an active part of the Democrat Party platform — anti-Christianity, — for a host of reasons.  We’ve discussed them over the course of the years.

But again, there’s still this thing called scholarship.  If you’re a journalist, you have to have some knowledge of history to be able to put things in perspective, in context.  No idea what Easter is!  They could probably tell you everything about Ramadan that you wanted to know, and they’re fearless in displaying their stupidity and ignorance about what Easter is.  And of course contingent in that is (laughing) a little insult.  “You people are so stupid! Look at what these Christians believe and celebrate.  What a bunch of idiots!”

RUSH: The NPR explanation of Easter to its audience was embarrassing. And Jon Meacham, formerly of Newsweek, now noted worldwide presidential historian, can’t even get the story of the Trojan horse straight? You can’t understand, you can’t really understand Western civilization without knowing and learning the ancient Greeks. The Iliad. Aristotle. Socrates. Now, not that they’re taught specifically. I mean, they are, depending on what you elect to learn. But the sum total of the knowledge is indeed, has always been a part of the curriculum that enforces the idea encompassing Western civilization.

And it is a target, because it’s what defines America, and it’s under siege and has been. And when America’s journalists who are supposed to be profoundly educated in history, American history, I don’t know how you can be a qualified journalist without having a significant understanding of American history and scholarship in the elements of what makes America America. 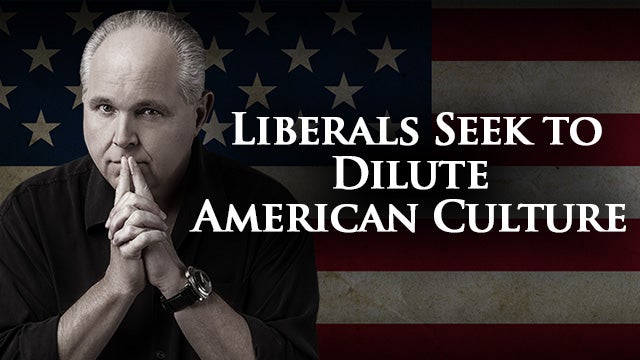 But if you’ve grown up, if you’re raised, if you’re brought up to resent all of that, to be opposed to it, then all you’re gonna be taught is what’s wrong with America, what’s wrong with this, the Christians are whatever they are. And so whatever they believe, we’re gonna mock and make fun of because they pose the greatest threat to minorities. And we find ourselves in the midst of this now.

So I think those are the two things that pose the greatest threat to our culture maintaining its predominance and its identity. And there’s no question our culture is under assault and has been for — well, it always is, actually, since the founding it always is. But it’s beginning to appeal, these efforts to mock and impugn by lying about America and American history, it’s been going on long enough now that enough people that you would consider mainstream American citizens are being taught a bunch of garbage, and they’re growing up believing it.

And we’ve now reached a generation of Millennials where it’s subscribed to not just by aggrieved, victimized minorities, but now various mainstream aspects of the population as well. And if Hillary Clinton had been elected, this onslaught would have doubled down in intensity, and I guarantee you right about now you would be experiencing feelings of hopelessness ’cause there wouldn’t be any stopping it. Donald Trump and his election remains the number one bulwark and obstacle.