RUSH: Two more bits of news from this Harvard Institute poll. “Young People Trust –” These two things together just… help me figure this out. “Young People Trust the President More Than the Media — Young people are deeply distrustful of the media according to the latest Harvard Institute of Politics poll, signaling more trust in President Donald Trump.” 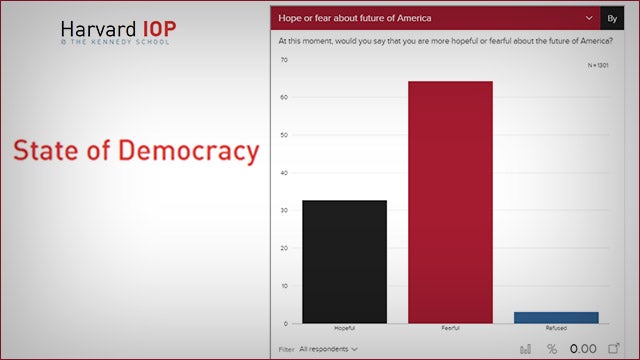 That’s the headline. Young people are deeply distrustful of the media according to the Harvard poll signaling more trust in Trump. The numbers are these. “Only 16 percent of young people in the poll said they trusted the media to ‘do the right thing’ while 22 percent said the same about Trump. Twenty-one percent said the same about the Federal Government and only 17 percent agreed that Congress did the right thing all or most of the time.”

Eighty percent of young people said it was more likely the media would sometimes or never do the right thing. Well, why does it seem everywhere I read where young people are involved, they soak up whatever the media is saying is and they believe it?

And I’m not saying this is done on — it’s not Drudge. Drudge wants clicks, he’s finding news that’s interesting to people, he’s an aggregator, he’s puts it up there. If you look at the stuff, because what Drudge is is simply a reflection of what is in mainstream media and other very popular blogs, outliers and so forth.

But the general tenor and tone each and every day is not just bad news, not just depressing news. It also seems to carry with it a depressing psychological component as well. And I think this is part of the design. I think journalism is taught to be practiced this way. But I also think journalism has become activism, and that happened a long time ago.

And so each individual newspaper, website, and then each individual reporter all working under those premises, by the time you aggregate all of the work on a daily basis and you represent it with headlines on Drudge, you could look at it and you could say, “There’s no point in fighting. We don’t have a chance. This is over!” But that’s all wrong. It isn’t over. The people in charge of the media are just able to make it look that way far more often than not.

So if you feed that bit of information to this whole universe of the Harvard Institute poll, 16% of young people said they trusted the media to do the right thing, 22% said the same thing about Trump. So Trump has more trust than the media, but Trump at the high point is 22%, that’s still 78% that don’t trust anybody. Twenty-one percent said the same about the federal government.

I mean, Zuckerberg admits yesterday that he’s working with the Mueller investigation — to do what? To prove that Trump colluded! Zuckerberg (imitating Zuckerberg), “Yeah, we’re working with them on this,” and then he realized we better shut this down. “I can’t say anything more about this,” of course. “We must keep this on the down low. But, yes, we’re helping.” Helping them do what?

Why is Facebook helping the Mueller investigation? Why aren’t they helping Trump? Facebook was always trying to help Obama. But then there’s this. The same poll. A new survey of voters 18 to 29 from Harvard’s Institute of Politics released yesterday says there is an historic youth wave coming in 2018 with Democrats outnumbering Republicans two to one.

Fifty-five percent lean Democrat. Twenty-one percent lean Republican. These are people 18-29 who say they’re likely to vote. The poll director, John Della Volpe, said, “This is the highest level of interest in voting we have seen in midterm cycles since we started the poll.”

So we’re being led to believe that young people 18 to 29 for the first time in a long time are eager to vote, they can’t wait. Except we’re told this every damn election, aren’t we? Every damn election we’re told the youth vote is lining up, two to one Democrat, man, oh, man, they can’t wait to vote, they’re so fired up. And then when the election comes, they don’t show up. But they’re telling us this is different. These Millennials are fired up. They can’t wait. And of those saying they’re likely to vote, there’s a two to one advantage for the Democrats.

So what I think we have here is yet another attempt to motivate young people. I think we have another example here of a poll being used to shape opinion, not report it. I think a poll is being used to motivate people, to influence people into action by way of voting. The age-group we’re talking about here, 18 to 29, peer pressure counts for a lot.

So if you get up and you turn on your device and you go to Yahoo News or wherever it is that you find this, you’re gonna find out that over half of your friends, half the people your age are gonna vote Democrat. You can’t wait. That must be the hip thing to do, then. So all kinds of psychological tricks, psychological ops are already being implemented in the Drive-By Media.

And then there is this from The Politico. “MSNBC’s Surging Ratings Fuel Democrat Optimism.” Okay. Fine. But then why is the same thing not happening to CNN? CNN is every bit anti-Trump as MSNBC is. CNN is every bit as hysterically anti-Trump and anti-conservative as MSNBC is. But it says here that Democrat strategists are seeing a new reason for optimism about the midterms. I thought you already were optimistic? I thought the midterms were effectively over, Democrats and media? I thought it’s just a matter of time.

“Democratic strategists are seeing a new reason for optimism about the midterms: soaring ratings for liberal-leaning MSNBC. Fox News and CNN both lost viewers from the first quarter of 2017 to the first quarter of 2018 — dropping 16 percent and 13 percent, respectively — as did pretty much every major cable network, according to Nielsen. MSNBC, on the other hand, surged to a 30 percent gain in the same period.”

Now, what they don’t tell you is that 30% of practically nothing is not a big number. So, yeah, MSNBC gains 30%, but 30% from what? Now, I’m not gonna deny — MSNBC’s audience is growing in the prime time. But if it means this bodes well for Democrat votes, then why isn’t CNN’s audience growing? And why isn’t the New York Times and the Washington Post, why aren’t those print operations rolling in money? If Democrat Party electoral prospects are defined by media audience, then why isn’t all of the left-wing media exploding? Why is it only MSNBC?