Trump can have any supporters he wants. There’s no crime there. This is the kind of thing, I mean. They’re at their end here, folks. They’ve got nothing, and they are desperate. So what the Koch brothers infiltrate the campaign. That’s not, by the way, what would happen. The way it would happen is is that Trump has accepted some staffers recommended by the Koch brothers to work in the White House. End of story. But because the Koch brothers are conservative/libertarian fundraisers, they automatically are evil.

Do you see the Republicans doing gigantic press conferences to announce this infiltration? And, furthermore, do you think you’re gonna separate Trump voters from Trump by doing a grand presentation of Koch brother infiltration of the Trump administration? It’s like this lawsuit that they’ve announced. They’ve got nothing, folks! They haven’t found anything that they have assured the American people exists: Evidence that Trump colluded with Russia.

This is mind-boggling! CNN has just given two or three panels to this. It’s audio sound bites No. 18 and 19. A reporter has released a 35-year-old tape that he says is Donald Trump posing as a PR person for Trump named John Barron and that this guy John Barron — who is actually Trump — is lying to the reporter about his net worth because Trump wants on the Forbes Richest Americans list.

The Washington Post website correspondent Jonathan Greenberg released the audio from a May 17th, 1984, phone call that he had with Trump Organization spokesperson John Barron. Greenberg claims that John Barron is actually Trump on the phone pretending to be a Trump PR guy. And he’s trying to tell the reporter about Trump’s assets and his position and his wealth, that he deserves to the on the Forbes 400 list. Here is a portion of the call… 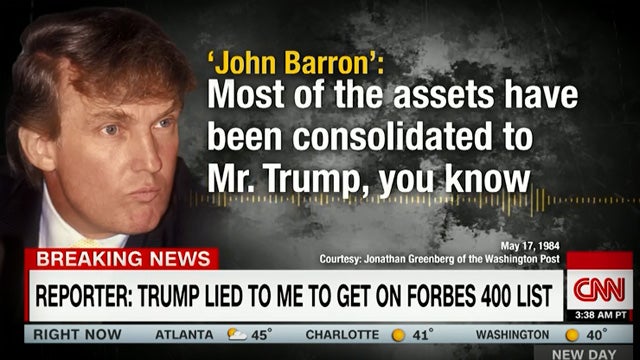 BARRON: Most of the assets have been consolidated to Mr. Trump, you know, ’cause you have down Fred Trump. And I’d like to talk to off the record, if I can, just to make this things easier.

BARRON: Is that all right?

RUSH: Now, the reporter claims the voice you heard there was Trump pretending to be a PR guy named John Barron and that this guy’s trying to get the reporter to believe that you gotta combine Trump’s assets — $200 million here, $200 million there — if you add ’em up, you get $400 million. It would put Trump on the list, and Trump’s trying to convince this reporter to write the truth about Trump’s wealth. Trump’s PR guy.

Now, here is the reporter this morning on CNN. Fredo Cuomo is talking to him about this call that’s 35 years old. And Fredo Cuomo says, “You got duped! What made him successful duping you?” The reporter apparently bought the idea that that was not Trump, that it actually was somebody named John Barron, and Fredo Cuomo wants to know how the guy feels about having been duped by Trump 35 years ago.

You know, he is a consummate con man. He understood what I was doing, you know, going around the country, and he figured out what he had to do in order to deceive me and get onto that list. And he did it very well. And he maintained that persona of just sort of talking about his assets without any sense of debt and lying about it. He had Roy Cohen call me to lobby for him about his net worth and lie for him. 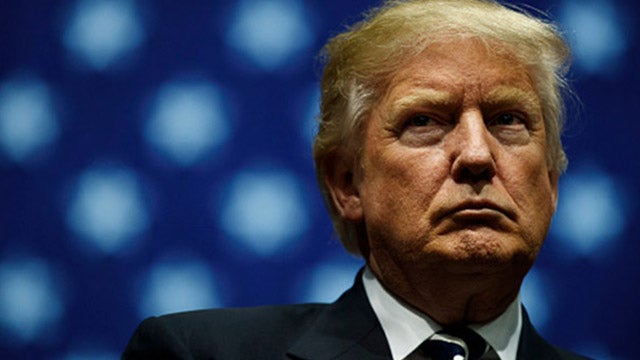 RUSH: Okay, that’s enough. This guy just discovered he talked to Trump’s PR guy 35 years ago. This guy doesn’t sound 35. Anyway, it’s just an observation. My point is, CNN is still talking about it! And this is evidence — evidence! — that Trump is a liar and that Trump is a reprobate and Trump demeans the office and Trump is horrible, and how can anybody defend Trump? Trump is so pathetic that he faked being his own PR man and lied about his wealth and not having any debt.

I’m telling you, folks, they’re reaching the end here. They have literally got nothing! So now it’s a big deal that they’re having a seminar next Wednesday to announce the Koch brothers have infiltrated the Trump administration? And this 35-year-old tape where Trump’s supposedly pretending to be his PR guy lying about his wealth? This is more evidence than what this all has actually been has been a concentrated, focused effort to destroy Trump’s polling data.

Public opinion in this country still matters. They don’t have any evidence that Trump colluded, committed any crime whatsoever. The only way, therefore, they can get rid of him is to lie about this stuff and present such a horrible picture of Trump, the American people begin to hate him, like they hated Nixon. This is the model. Nixon is the model. Engender so much hate for Trump that the Republicans march up to the White House and tell Trump, “Mr. President, we no longer can support you. It’s over. The American people have left you. You have no support on Capitol Hill.”

This has been the objective. If they could have succeeded in tying the crime of collusion to Trump, they would have. But they were never gonna be able to because he didn’t do it and there’s no evidence for it, thus. But this is becoming laughable now. CNN’s treating this like it’s every bit as contentious and controversial as Watergate, that Trump did this 35 years ago, lied about his wealth.

You heard the reporter, who does this? Who pretends to be a PR guy? Nobody was used to this. Nobody had ever tried to fool us this way. I don’t care if he did it or not, it is in no way, shape, manner or form, anything coming close to being worth getting rid of a president for. But if you throw it on the pile of all the other stuff they’re throwing out there, they’re trying with mission creep, you know, get Trump’s numbers to drive down and drive down, drive ’em down, drive ’em down. But they’re not even succeeding at doing that.

RUSH: You know, I thought this Trump phony PR guy story was familiar. The Washington Post ran the story two years ago in the campaign. They are reviving something that didn’t work the first time they tried it. This big announcement the Democrats have made about announcing that the Koch brothers have infiltrated the Trump administration, it’s gonna be done in a series of speeches by Democrats on the Senate floor starting Monday.

They’re taking the masks off, Snerdley. This is what I’ve been saying. They’re dropping the camouflage. They’re getting so frustrated, they are telling everybody who they are. Mark my words, folks. We are at the beginning of the gigantic backfire here, and they have the beginnings of the understanding of it. I’m not predicting when this is gonna end, but we’re at the beginning of it right now. Do not doubt me.