RUSH: So now we move on to Kellyanne Conway and the beatdown with Dana Bash. Now, this is interesting because it goes right to what we did on this program last week when we read off all of the conflicts in the media and the incestuous connections in the media. Media people and their wives working for Democrats on the hill, Democrat campaigns, media people leaving journalism and going to work for Obama or some other politician, and those conflicts are never reported, they’re never cited, they’re never mentioned. 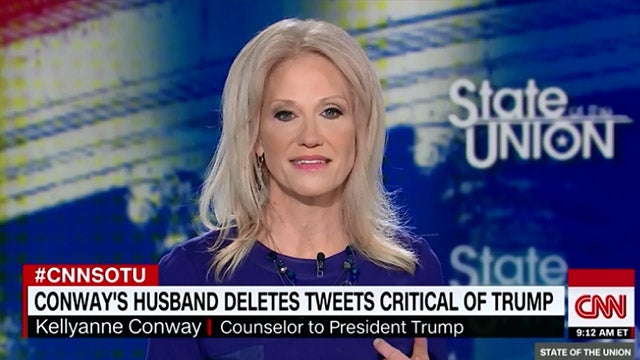 Hey, Chuck, tell that to all the Republicans you accuse of having conflicts. So what happened here? Dana Bash decides to chide Kellyanne Conway about having a husband who tweets critical things of Donald Trump. And so a bridge has been crossed. If Kellyanne Conway’s gonna be asked about her husband’s opinions and she’s gonna have to justify her husband’s opinions, or if she’s gonna have to justify her opinion based on what her husband’s is, remember, it’s Hillary Clinton who says that American women are still under the jackbooted thug boots of their husbands.

The reason women didn’t vote for Hillary is ’cause their husbands wouldn’t let them. But yet here’s Kellyanne doing her thing. Her husband doesn’t particularly care for Trump, she works for Trump, and somehow Kellyanne Conway owes people an explanation? She didn’t take kindly to this. It’s the example, response to a tweet. It all got started that way. Here is Dana Bash: “Your husband is a very well-respected lawyer, and he’s been sending some tweets that have been critical of the administration. Just an example, in response to a tweet he saw saying President Trump’s aides are reluctant to speak for him because he contradicts them, later, your husband wrote: “So true. It’s absurd.”

CONWAY: Two things I’ll say to you. Number one, that, again, that woman who lost the election whose name I never say on TV anymore, is wrong, that women — I think she said white women have to listen to their — the men in their life to form their own political opinions. Wrong again, lady. Number two, it’s fascinating to me that CNN would go there, but it’s very good for the whole world to have just witnessed that it’s now fair… (crosstalk) – excuse me, that it’s now fair game how people’s spouses and significant others may differ with them. I’m really surprised, but very, in some ways, (crosstalk) relieved and gratified to see that.

RUSH: Now, Dana Bash is taken aback because Dana doesn’t understand what she did wrong here. She doesn’t understand what Kellyanne could possibly be upset about. Kellyanne’s sitting there for her umpteenth thousandth interview on CNN, and Dana Bash said, “You know, your husband, very respected lawyer.” There’s innuendo there. “Your husband, very respected, your husband doesn’t like Trump. Your husband says absolutely right, Trump’s people don’t like speaking for him because he’s so off the wall he contradicts them. It’s so true. It’s absurd working for Trump. So the husband is brilliant. The husband’s got it all together. Kellyanne has some explaining to do. And Dana Bash doesn’t see that that’s how she set it up. So here’s the next bite.

BASH: I would ask you that if you were a man.

CONWAY: No, you wouldn’t.

BASH: A hundred percent I would.

BASH: And it’s not about that, it’s about questioning, publicly questioning what you are doing for a living with regard to your boss. And it has nothing to do —

CONWAY: No. And it has nothing to do with my spouse and —

BASH: Right. That’s why I was just asking. 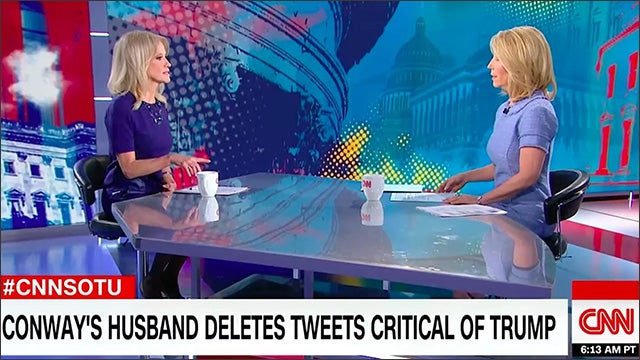 CONWAY: Oh, no, no, no, you just brought him into this, so this ought to be fun moving forward, Dana.

CONWAY: We’re now going to talk about people’s spouses and significant others, just because they either work in the White House or at CNN? Are we going to do that? Because you just — no, you just went…

RUSH: Okay. So I guess it means if Dana Bash’s husband disagrees with her, it become news and so forth. Now, the media is reporting that Kellyanne was — I forget how they, I forget the exact words. Well, yeah, they did take that as a threat against Dana Bash, but the media threatens Republicans all day anyway, innuendo and directly. But no, the media’s reporting it as though Kellyanne lost it, Kellyanne got beat to smithereens, Kellyanne was humiliated. I don’t hear it that way. But of course that’s how they would report it.