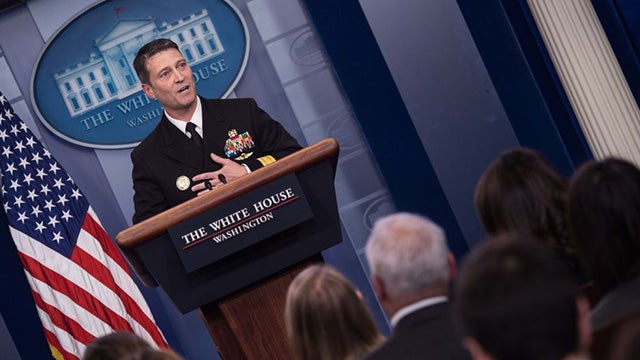 Now his nomination to be head of the VA has become “mired in controversy.”  You know why?  Because this guy, Ronny Jackson — who they continually refer to as “Trump’s doctor” — apparently went on drunken rampages and apparently was passing out prescriptions for pain medication to anybody who wanted them. And apparently during his drunken rampages, he’d be knocking on doors all over the White House.

Except none of this happened in the last two years.  All of this happened when Ronny Jackson was White House physician while Obama was president and while this guy was Obama’s doctor, and so the question is — and Jon Tester, by the way, senator from… Where’s Tester from?  Montana?  Idaho?  Somewhere up there with the bison.  Jon Tester is among many asking (paraphrased), “Wait a minute, now.  Wait a minute.  If we knew this about this guy back during the Obama administration, why was he not fired back then?

“If this guy’s getting drunk and he’s the White House doctor…?” (interruption) I knew it was Montana.  The bison place.  I knew it was that. (interruption) That’s what I said. “Montana? Idaho?” I knew it was Montana.  The point is, why isn’t anybody asking, “Why did this guy continue to be used by Obama?”  Why did Obama continue to use the guy as his doctor if he was getting involved in these drunken rampages and knocking on doors and passing out pain med prescriptions left and right?

This stuff is surfacing now only after he’s been nominated to head the VA.  Look, I don’t know what’s true and what isn’t true.  That’s not the point here.  But there sure as hell as a pattern, and it dovetails with the point that I’m making here today.  This stuff was widely known back when Obama was in the White House, and nobody thought to report the guy.  Did Obama know that this guy’s on drunken rampages and passing out pain meds left and right when the guy’s acting as Obama’s White House doctor?

Did Obama not know and nobody told him? Give me a break!  Of course Obama knew.  It’s like Joy Reid. You know something?  Homosexuality and liberalism is one of the biggest myths.  The fact of the matter is that liberals, when you get right down to it, they’re not that big on homosexuality.  Jimmy Kimmel makes gay jokes.  Colbert makes gay jokes.  Getting called on the carpet for it, but they get away with it.  Why?  Because they’re in the family, because they’re liberals, and so they look the other way.

Until they get called out on it, and then they have to do something about it.  But it’s never a full-fledged or permanent banishment or punishment.  But Jimmy Kimmel can start telling gay jokes all night long and talking about conservatives, and Colbert can get crude with it by basically implying that Putin and Trump engage in oral sex.  But what are they making fun of?  They’re making fun of homosexuality. 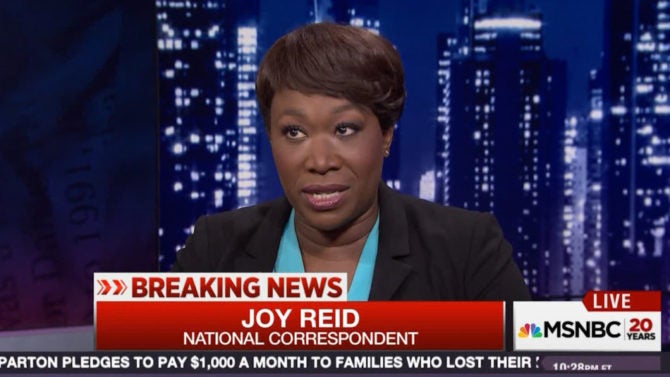 They’re making fun of gayness.  It’s disguised as making fun of Trump or making fun of conservatives.  What it is is homophobia!  But they get away with it because, quote-unquote, “they’re in the family.”  Now the latest is Joy Reid, who is this lunatic wacko host on MSNBC, and she has had post after post after post on Twitter and her Facebook page with a lot of anti-gay venom, a lot of anti-gay so-called humor, and she’s claiming that she was hacked, that she didn’t say these things.

So an investigation now is underway to find out if indeed she was hacked or if what she posted was really her.  And it was.  And it’s gonna be found.  MSNBC is waiting to decide what to do with her until the results of the investigation are in, but I’m here to tell you she wasn’t hacked.  The Russians did not hack Joy Reid’s Facebook account or her Twitter account — and the anti-homosexual rants that she’s gotten into are really vile and ugly.  But the dirty little secret is, look at all of the homophobia that you will find on the left, and sometimes they slip up and they start telling gay jokes.

And it ought to awaken the homosexual left, the political homosexual community as to what’s really the case on their side of the aisle that’s so-called in their family.  ‘Cause it’s all for show.  None of it is legit.