Flashback: Obama Told Us the Russians Couldn’t Rig an Election

RUSH: Okay. We have a couple of Obamas here. The first one gets close to what I remember him saying. It’s close enough, but it’s not exactly what I remember him saying. He has described how it would be impossible for any outsider to literally steal or determine the outcome of a federal election. This bite that we have goes back to October 18th, 2016. And here Obama is chiding Trump. 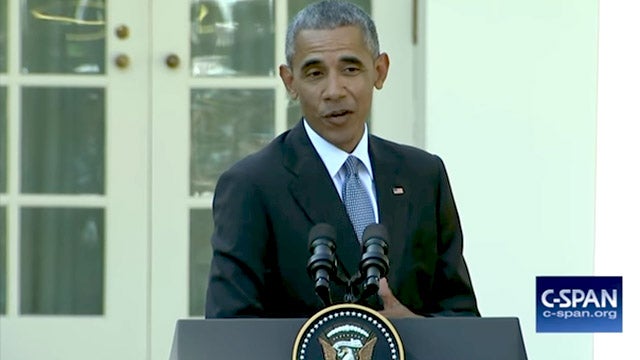 Trump at the time is talking about the potential for voter fraud amongst illegals. He’s out there saying that millions of illegals are gonna vote, and he’s also alluding to — the talk of Russia tampering, it was out there, but it had not reached the crescendo that it was to become because at this point in time, keep in mind when you listen to this, everybody thought Hillary was gonna win. They were convinced that they had fixed the election for themselves.

They were convinced Trump did not have a prayer, Hillary was gonna win one of the biggest landslides ever, when Obama makes these comments. And it’s like two or three weeks before the election. It was in the Rose Garden, joint press conference, Obama and the Italian prime minister, Matteo Renzi.

And the question came from a Reuters correspondent. “Donald Trump is telling his supporters the election’s rigged. He’s asking to monitor certain areas on Election Day. How concerned are you about the potential for violence? And what about after Election Day? Are you worried the results of the election may be distrusted?”

OBAMA: I have never seen in my lifetime or in modern political history any presidential candidate trying to discredit the elections and the election process before votes have even taken place. It’s unprecedented. It happens to be based on no facts. Every expert, regardless of political party, regardless of ideology, conservative or liberal who has ever examined these issues in a serious way will tell you that instances of significant voter fraud are not to be found. It doesn’t really show the kind of leadership and toughness that you’d want out of a president if you start whining before the game’s even over? So I’d invite Mr. Trump to stop whining and go try to make his case to get votes.

RUSH: Right. Now, that comes close. Here Obama’s talking about voter fraud, and people have looked into it, and there’s never been any evidence of it. He gets real close here. And, you know, when Obama does these things he always constructs these straw men, such as, “Every expert, Republican and Democrat alike.” That’s how Obama always tried to establish credibility with whatever point he was making. “Well, Republicans and Democrats alike agree, both conservative and liberal economists all agree, conservative and liberal climatologists all say.” That’s one of his techniques.

He says they’ve examined the issues in a serious way and will tell you instances of significant voter fraud are not to be found. You could easily suggest he was including Russian voter fraud. It just has never been found. But there’s another instance. I don’t remember when it happened. It might have been in the spring of 2006. Obama talked about this a lot and he actually got close it detailing why it would be impossible for a foreign actor to steal or even determine the outcome of federal election based on things I’ve said. Too many precincts, too complex.

Now, here’s Obama December 16th, 2016, at a press conference. They were talking about Russian meddling in the 2016 presidential election. And this is what Obama said about it.

OBAMA: The Russians were responsible for hacking the DNC. In early September when I saw President Putin in China, I felt that the most effective way to ensure that that didn’t happen was to talk to him directly and tell him to cut it out, there were gonna be serious consequences if he didn’t. And in fact we did not see further tampering of the election process.

There are still people who think that it was an inside job, folks! And for a simple reason. There is a log of the transfer of data from the DNC network servers to places off site. And the speed, the transfer speed of the data is far faster than anything you could get online. The transfer speeds are faster than even, you know, a T3 line, a gigabit Wi-Fi. The speeds or the speeds you would get if you plug a thumb drive into the USB port and transfer that way. And that’s why people think it was an inside job. Whatever was on the DNC server and wherever it ended up, WikiLeaks or wherever, because those data speeds could not have been achieved over the internet. And that is absolutely true.

And then Obama says I talked to Putin, I’m gonna tell him to cut it out. What a tough guy. I’m gonna tell Putin to cut it out. And then December 16th, 2016, Obama says, “In fact, we did not see further tampering of the election process.” Can you imagine these deep state guys and Steele and Comey and these clowns at the FBI trying to work up this theory that Trump colluded with Russia and here’s Obama saying, “In fact, we didn’t see further tampering of the election process after the DNC hack.”

We didn’t see further tampering of the election process after, in Obama’s words, the Russians hacked the DNC server. I mean, he cut the stage out from underneath the deep state and their efforts to prove that Trump was behind colluding with the Russians here. So, of course, nobody did anything with this sound bite except us and focusing on the tough guy Obama telling Putin to cut it out.

RUSH:  Okay, we found it.  Cookie has found the Obama sound bite wherein he says there is no serious person out there who would suggest you could even rig America’s elections in part because they’re so decentralized. There’s no evidence that that has happened in the past orthat there are instances that could happen this time. And we are preparing it for broadcast even as we speak.  I knew I’ve heard this!  I think we have even played the sound bite on the program, and I’m not sure of the timing, but I think it was in the spring.  My memory is it was in the spring.

But whenever it is, it doesn’t matter.

He said it, and it was before the 2016 election — and my memory is it was well before.

RUSH: Here’s Obama. And what’s the date? It’s October 18th, 2016. And it’s from the same press conference with the Italian prime minister, Matteo Renzi. So this is essentially three weeks before the election, October 2016, and Obama gets a question. “Donald Trump is telling his supporters the election is rigged. He’s asking them to monitor certain areas on Election Day. How concerned are you about the potential for violence, and what about after Election Day? Are you worried the results of the election may be distrusted?” Now, listen to this answer.

OBAMA: There is no serious person out there who would suggest somehow that you could even — you could even rig America’s elections, in part because they’re so decentralized and the numbers of votes involved. There’s no evidence that has has happened in the past or that there are instances in which that will happen this time.

RUSH: Now, I have to acknowledge, remember at this time everybody thinks Hillary is gonna win. And so the reason Russian tampering was restricted to the DNC server during the preelection harangue about this, they didn’t want to taint Hillary’s ultimate election, which they knew was gonna happen. It’s a crucial element here. Everybody, including Obama, thought she was gonna win in the biggest landslide in history, got a rival landslide that Johnson had over Goldwater in ’64. And so they weren’t gonna do anything that would taint her election.

But in this instance Obama’s telling the truth. There’s no serious person out there who would suggest that you could rig America’s elections in part because they’re so decentralized, the number of votes involved, there’s no evidence it’s ever happened.

And now look where we are. Now we have totally disrupted the normal ebb and flow of this country for over a year-and-a-half now on an impossible premise and for which we know a bogus document was written and publicized and then mistakenly or erroneously, purposely miscast as legitimate intelligence when it’s nothing but political opposition research. Obama: Not possible. And it isn’t! It would not be. And yet look at what we’re doing.