So Freaking What, Avenatti?

RUSH: Let’s go to Avenatti, Stormy Daniels’ lawyer — who, by the way, I just found out owes the IRS $5 million. Did you see the story? He owes the IRS $5 million over some such thing. The actual letter from the IRS has been reprinted. I looked at it. I actually tried to scan the bar code to prove its legitimacy and it was a copy of a copy. The bar code didn’t scan. But, anyway, it’s out there. But the lawyer, Michael Avenatti — the lawyer for the porn star, Stormy Daniels — says that Trump’s personal lawyer, Cohen, “received $500,000 from a Russian billionaire in the months after the 2016 election.

“In a tweet and a report released on Tuesday, Avenatti said that a company controlled by Viktor Vekselberg, a businessman with ties to Putin sent the payment to Cohen. Avenatti did not release any documentation to support the claim. He didn’t reveal the source of his information. Reuters could not immediately verify the claim. It was not clear how Avenatti would have knowledge of any payment from Vekselberg to Cohen.

“Avenatti said that Vekselberg and his cousin made eight transfers to Cohen between January and August of 2017 through a company called Columbus Nova LLC, for a total of $500,000. Columbus Nova is a U.S. investment arm of the Renova Group, a conglomerate controlled by Vekselberg. Both Vekselberg and Renova were hit last month by U.S. sanctions for suspecting meddling of the U.S. election.” Trump put the sanctions on! (laughing)

It was Trump that put sanctions on this guy supposedly sending Cohen money. Now, what Avenatti — and the media went right along with this. What Avenatti is trying to say here is that this is the Russian connection. “This is it! We finally found it! We had this $500,000 payment to Trump’s lawyer, and this is for job well done. This is for winning the election, helping the collusion.” This is what Avenatti is trying to say. Now, folks, it doesn’t add up.

I’m growing short on time here, so I need to do an abbreviated response here. But the Drive-By Media has a sort of a rundown of what has been learned so far, what Avenatti’s alleging, what is known. And it’s creepy, the way that they have assembled it. They say there’s Russian money paid by Columbus Nova. It’s being described as a clearinghouse for a guy who is very, very tight with Putin. But Columbus Nova says, “No! None of this is true.”

There’s a lawyer four Columbus Nova. His name is Richard Owen. He issued a statement. “Columbus Nova is solely owned and controlled by Americans, the company said in a statement. After [Trump] was inaugurated, Columbus Nova hired Cohen as a business consultant regarding potential sources of capital and potential investments in real estate and other ventures.” But it had nothing to do with this Vekselberg guy, who had ties to Putin!

Another big set of payments to Cohen, Trump’s lawyer, according to Avenatti came from AT&T! But Cohen is not a lobbyist. Cohen has any been part of the Trump presidential campaign or administration. He’s always been an outside lawyer. So AT&T was hiring Cohen to…what? Give them heads-up for what’s going on in the administration? There’s nothing illegal about that. There isn’t anything illegal about any of this, as it turns out.

They’re trying to say, Avenatti’s trying to say, “Some of this 500 grand from the Russians went to pay Stormy, my client, and that Trump paid off my client with Russian money!” This is what he’s trying to allege. But, folks, all of this just doesn’t add up, and I’m going to try to illustrate this by going to the audio sound bites. First up is George Stephanopoulos. Now, if there were anything to this — and this Avenatti guy is a former Democrat operative, and he’s apparently known for being late in paying bills.

He has this $5 million due to the IRS, has not paid employees, has not deducted proper payroll taxes, apparently, over the course of his many years as a lawyer and businessman. If this guy… If this 500 grand from this supposed person with ties to Putin… If there was anything to this, I am here to tell you the Drive-By Media would be all over it, the Democrats would be all over it. Here’s the thing to realize about this. The Cohen case was transferred to the Southern District of New York by who?

By Mueller. Mueller had to know about this!

If Mueller and his 16 anti-Trump lawyers didn’t know about this, then how good are they? I maintain that Mueller did know about this and even knowing about this, he sent this case — the Cohen case — to the U.S. attorney for the Southern District of New York. Meaning this doesn’t even rise to the level of interest to Mueller. (giddy) Yet Avenatti is trying to make the media jump on this as, “This is it. This is it! This is what we’ve all been looking for! This proves collusion, Trump-Russia.” If it did, the media would be all over it. STEPHANOPOULOS: Okay. But nothing wrong with any of that.

AVENATTI: We don’t know where this ends, but it doesn’t smell right.

RUSH: So this guy’s got nothing. “We don’t know where it ends, but it doesn’t smell right”? People can hire Cohen! He’s Trump’s lawyer. He’s an outside counsel. He advises people on real estate. So AT&T sent him money, and Columbus Nova sent him money, and even Avenatti says, “They all had different reasons for sending him money — real estate, business consulting, health care consulting, the list goes on.” So? So freaking what?

This guy’s trying to make a mountain out of a molehill. He’s trying to say that there’s criminal activity here when there isn’t. And even his buds in the media think that there’s nothing to see here. Here’s Michael Zeldin. This guy is a TV analyst all the way back to Clinton-Lewinsky, days. Big Democrat, big Clinton supporter. He’s on CNN. Alisyn Camerota says, “Michael, how do you see this?” 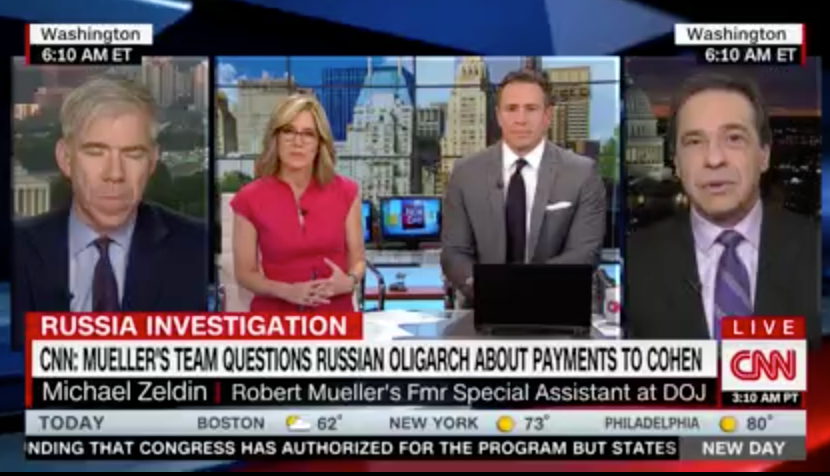 ZELDIN: Cohen’s his right-hand man, he sets up a limited liability corporation in Delaware with his name fully transparent on it. These companies hire him to gain insight into what’s the Trump administration position is on issues that affect their companies. That’s all business as usual in Washington. I don’t see anything on the face of it that’s wrong about that.

This Avenatti guy is a Democrat operative, first and foremost, a lawyer second, and it’s clear he’s doing some damage to himself here because he comes up with what appears to be this giant bombshell, and people look into it, and it’s nothing. If this guy ever does come up with something, he’s gonna have nothing but a bunch of doubters now questioning his competence and his motivation, because he clearly hopes and wants people to see things that are not there.