What You Need to Know About Tommy Robinson

RUSH: I have more emails, people asking, “Rush, who is this Tommy Robinson guy that they put in jail in the U.K.?” Based on my email, there’s a lot of interest and confusion about this because of the way it has been reported in the U.K. I’ll explain this to you before the program’s over today, sooner rather than later. What happened to this guy is definitely not good, but there’s even more to this. I mean, the real nugget in the Tommy Robinson story is something you might not pick up on on your own that you really need to be aware of.

Basically, what they’re doing is everybody who is not left wing in the U.K. now is being considered “far right” — not conservative, “far right.” In other words, anybody who does not follow and subscribe to the orthodoxy of the left — including open-border immigration, permitting endless streams of militant Islamists into European countries, if you oppose that — you are being categorized as “far right.” And it is that categorization which apparently is being used to put people in jail! To deny them liberty, freedom, what have you.

The designation “far right…” In other words, anybody who is not an avowed leftist is automatically now being categorized as a fringe kook and it has become permissible to just throw ’em in jail just because they happen to think what they think in the U.K. But this story has to do with a guy who was opposed… There are a bunch of trials going on in the U.K. Apparently, a bunch of militant Islamists are running pedophile rings — pedophile rings! — and they have grooming parties or sessions, which is where they take underage girls and groom them for being paired up with adult men. 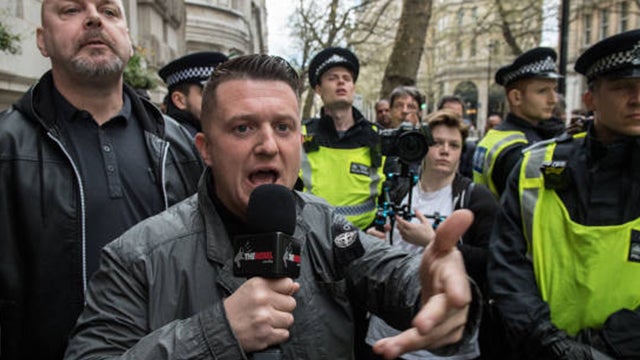 They’re underage, and the trials are underway. All of — well, I’d say 80% — of the defendants are militant or Islamist. And this guy, Tommy Robinson, was out of jail on a suspended sentence. He was on probation. He was ordered not… He’s an anti-immigration activist. He is also said to be “anti-Islam,” which is often a tag thrown around about people here, which isn’t true. But the point is that he was televising this trial standing outside the courthouse in Leeds, and it was said that he was in violation of his previous sentence.

He was violating probation. He was ordered not to cover any more of these trials, and he showed up and was live streaming that was going on outside on his Facebook page, and the cops came and took him away and put him in jail for 13 months, which was his original sentence. He was out on probation. So he did technically violate a judge’s order. But the judge in the case that sent him packin’ ordered a media blackout on all coverage of what had happened to Tommy Robinson and pretty much all coverage on these trials.

And he was categorized as “far right.” Far right here, far right this, far right that. And that, to me, is the real, quote, unquote, “danger” here. What’s happening in the U.K. … They’re away ahead of us in terms of open borders and the destruction of their culture. They have permitted it. It’s gotten to the point now… If I’m reading some of these things right, they have lost control. The immigrants are actually in now positions of power to actually determine policy, and they are enforcing authoritarian, autocratic policies.

Now, the U.K. does not have a Constitution.

They don’t have freedom of speech or anything of the sort. A lot of people don’t know that, but they don’t. There is no freedom of speech per se. It’s supposedly understood. But the real thing to take away from this story is they categorize this guy as “far right,” which then permits them to spirit him away. He’s gonna be put in a jail with other Islamic prisoners. It is assumed by everybody he’s gonna be murdered in jail, and nobody seems to care. That is being treated as almost a just punishment for what this guy’s been doing, and he’s just opposing open-border immigration that he feels is destroying the United Kingdom.

But then the judge slaps a gag order on all media.

They’re not permitted to cover any aspect of this at all.