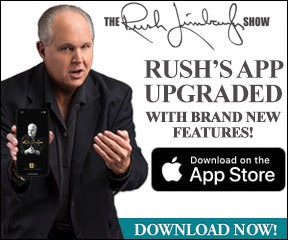 Now, you know, tech is my hobby, and we’re doing this right. We redesigned the Rush app, the RushLimbaugh.com app that is the companion to the website, RushLimbaugh.com, Rush 24/7. It’s a brand-new app with redesign — well, it’s not brand-new now, it’s some months old, but we are in the process of constantly updating it. And what we have added is easy access and downloading of podcasts. 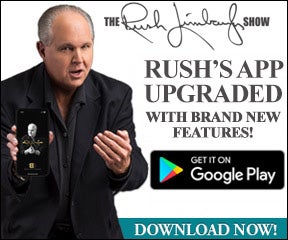 Yeah, it does, but there’s a free side that offers transcripts. It doesn’t offer streaming of the Dittocam or of the radio program, no audio streaming, but the transcripts of every program are available, and you can share them, there are video highlights, TV appearances I’ve made, a whole video library. I mean, the free side of RushLimbaugh.com would blow away even those who are behind a pay wall. When you subscribe is when you get streaming audio, the streaming video, and a whole lot of additional benefits.

But you don’t have to. The app itself is free, and accessing many things on the app is free. And we’re in the process of upgrading it ongoing, and we had one drop late yesterday afternoon. New podcast tab where you can listenO to podcasts and download very easily for off-line listening. We were on the cutting edge of offering podcasts way back when Steve Jobs introduced them during a keynote at an Apple product presentation. The name was right there in the background, and we have been leading podcasts providers since it began a popular format.

We have increased, added to the access to the transcripts. Now days and days of additional transcript access have been added. You can just keep endlessly scrolling back through content now. I mean, there’s 29 years of content, and you can just keep scrolling back through it. Snerdley is looking at the upgraded version now, and his eyes are wide open. Can’t believe it. I mean, the app looks great. It is just a great, great design. And I have to tell you Kathryn was one of the lead designers of both the app and the website redo. And, folks, it’s just tremendous. We’re all so proud of it.

The color scheme, we’ve primarily gone dark because eventually all iPhones, smartphones are gonna have OLED screens, which, what that means to you is that when the screen’s black, the battery isn’t being used. So the darker, the more dark or black there is on a screen, the more energy efficient the phone is. So we have designed the app knowing that this is coming. Apple has one phone that’s OLED. It will have three more coming in the fall. Samsung and some others have a couple. But it’s eventually gonna be all OLED or 80%. And so, once again, we are on the cutting edge there.

There is some color in it; don’t misunderstand. It’s just a great, great, great reboot. And it is such a companion to this program. If you don’t have the app, all you have to do is go to the Google Play or the iOS App Store and just search “Rush Limbaugh.” That simple. And it will pop up. And you’ll see it ’cause it’s a great photo of me on a black background. (interruption) What? No! It will automatically update. You don’t have the new version as of two months ago? Go ahead, it won’t matter, delete it or not, it should upgrade right over it.

Just go to the upgrade page in the App Store and look for it, and when you see it, download it, and it will upgrade over it. We have not rewritten it from ground up code-wise. We’ve just changed the design and the outward appearance of the app, and we have added many, many features, as I’m trying to detail here, but I keep being interrupted by people dazzled at the appearance. We have made improvements to the audio and video player. And what that means is that you can more easily skip from episode to episode now in whatever you are watching or listening to. And there is now a new home tab section called Rush Famous Quotes, and what a day to introduce that when a famous quote of mine was tweeted early this morning by President Trump, which we’ll get to in just a moment.

Now, I have been promising this upgrade for about the past three weeks. It’s on schedule. Our software code guys told me it would be the end of the month. One of the things that — I don’t want to spend a whole lot of time on this. We wanted to add in-app subscriptions, because, remember, the app is free, and you can use a lot of our website, a lot of the app, without paying anything.

I mean, there’s all kinds of stuff, all kinds of content that is free. But if you do want to subscribe to get the Dittocam or audio streaming and all the variations of that, you can subscribe right from within the app now. You don’t have to go to the website. You have to make an arrangement with Apple for that to happen.

But what we’ve wanted to do is just make this streamline easy. Everything that you can do on the website, we wanted available there in the app, and it now is, including offline listening and downloading of podcasts. That used to be… Getting the podcast used to be a pain. You used to either download directly from the website or go to iTunes to do it, but now we have made it easy.

And people enjoying the podcasts is an expanding number right off the bat. So, again, it’s just “Rush Limbaugh,” the Rush Limbaugh app in either Google Play or the iOS Apple App Store. And it’s free. It only costs anything if you make the decision to subscribe — which is a great decision, by the way. The Limbaugh Letter, the monthly newsletter, is also digitized now. And it is included in the subscription. But you’ll find all of that out as you explore it. So it’s finally here. 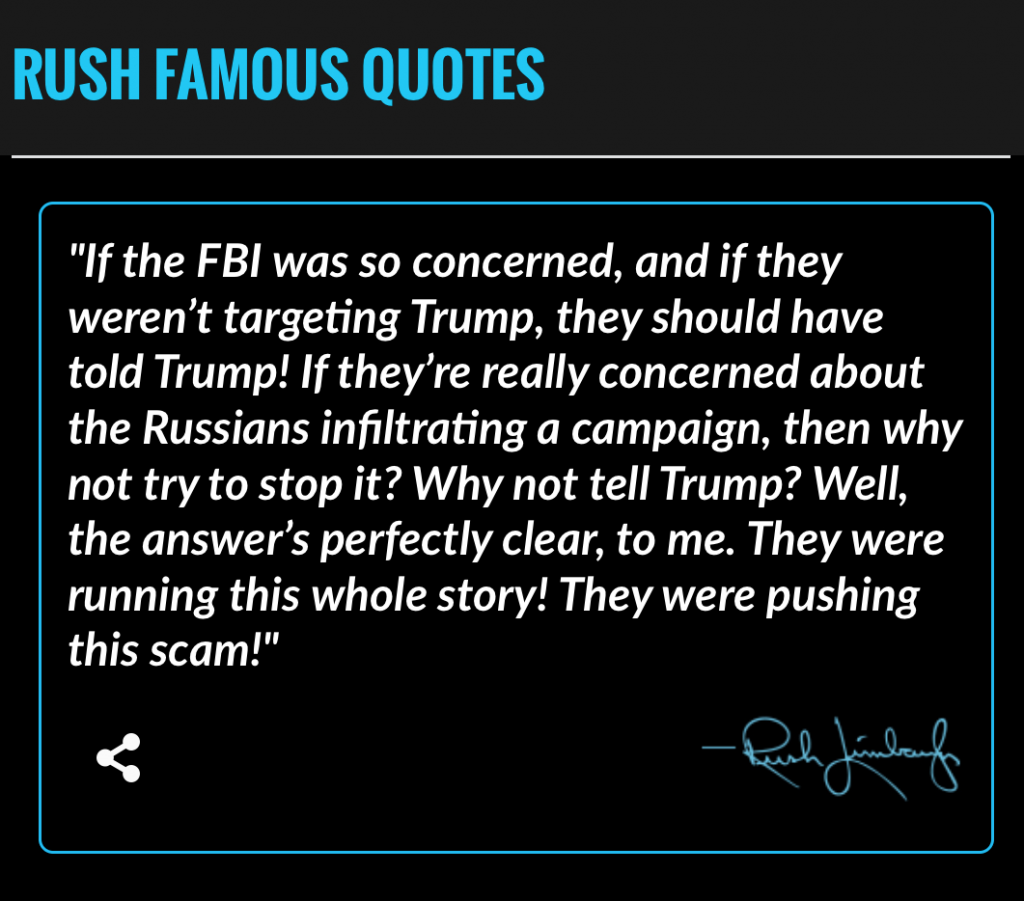 By the way, we’re not finished. The update process, the upgrade process continues. The work has already begun on the next app upgrade, which… I mean, our next target is enhanced notification options so that you can choose to be notified when something you want to learn is going to happen on the app. Now, the Famous Quotes section. We post those quotes as the show goes every day, even before the full transcripts are ready. Now that the Famous Quotes tab has been added to the app with a sharing feature.

Everybody can now easily tweet or text or email or Facebook all of these Famous Quotes right from your phone — just like the president does! We upgraded the Famous Quotes. As soon as Koko thinks I have uttered a famous quote, it goes up there on the app, and you can send it to anybody. You can share it however you want. Tweet, text, email, Facebook, what have you. So again, “Rush Limbaugh” is how you search for it if you don’t have the app. And, if you do, just go to the upgrade section of the app store and find it and upgrade it.

RUSH:  Snerdley’s talking about, “Man, I can’t believe how easy the navigation is on this app.  You can do anything on the app!”  That’s exactly it. It’s a great way to put it: Anything you can do on the website, you can do on the app, and it’s right there at your fingertips, including listen to the program. Watch it on the Dittocam.