RUSH: Bill Clinton. He was on NBC. Been a lot of places. Got a new book out with James Patterson, The President is Missing. He and Patterson are doing interviews. Patterson isn’t speaking. It’s all Clinton. It’s not going over well. Mika Brzezinski, who’s part of the Morning Joe team, is in shock. After watching Clinton today, she said (imitating Mika), “My God, my God, it sounds just like Trump! He didn’t do anything. It’s everybody else’s fault.” She is terribly let down and disappointed.

And so let us. It’s been eight months since anybody’s heard from Slick Willie. That’s when the Weinstein dam blew, so to speak — hee-hee-hee-hee — and now Clinton’s gotta come out and hawk this book. So it’s the Today show today. The correspondent is Craig Melvin interviewing Clinton. Question: “With everything that’s going on with the #MeToo movement” — see, Clinton thinks he’s gonna be asked about his first foray into writing thriller novels. Now he’s being asked about the #MeToo movement. “How would you have approached accusations in the Lewinsky scandal differently, Mr. Clinton?” 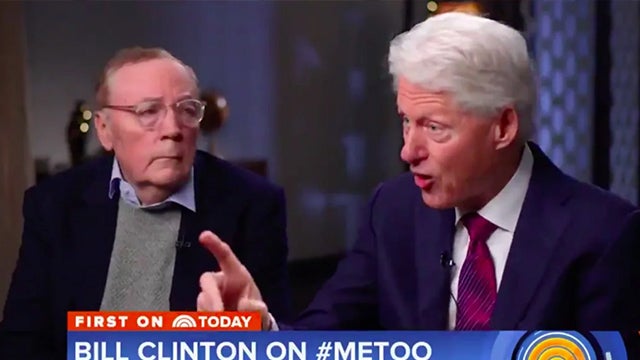 CLINTON: Well, I don’t think it would be an issue because people would be using the facts instead of the imagined facts. If the facts were the same today, I wouldn’t. Don’t we have a right to change the rules? Yes, but you don’t have a right to change the facts. A lot of the facts have been conveniently omitted to make the story work. I think partly ‘cause they’re frustrated that they got all these serious allegations against the current occupant of the Oval Office and his voters don’t seem to care. I think I did the right thing. I defended the Constitution.

RUSH: What the hell is this? So the guy says with everything going on with the #MeToo movement, how would you approached the accusations in the Lewinsky scandal differently? (Clinton impersonation) “I don’t think it be an issue ’cause people would be using facts instead of” — he starts gibberish here. “If the facts were same today, I wouldn’t. Don’t we have a right to change the rules? Uh, you know, you don’t have a right to change the facts. A lot of facts have been conveniently omitted to make the story work.”

What’s been omitted? He looked at us in the eye. He wagged that very long finger at us. “I did not have sex with that woman, Ms. Lewinsky, not a single time. I didn’t lie. I didn’t ask anybody to lie a single time. Never. And now I gotta get back to work for the American people.” And he lied. He had done all of that, and there was a stain on a blue dress to prove it. So Craig Melvin said, “Did you ever apologize to Monica Lewinsky?”

CLINTON: Yes. And nobody believes that I got out of that for free. I left the White House $16 million in debt. But you typically have ignored gaping facts in discovering this, and I bet you don’t even know them. This was litigated 20 years ago, two-thirds of the American people sided with me. They were not insensitive to that. I had a sexual harassment policy when I was governor in the ’80s. I had two women chief of staff when I was governor. Women were overrepresented in the Attorney General’s office in the ’70s. I have had nothing but women leaders in my office since I left. You are giving one side and omitting facts.

RUSH: What is this? He playing the “I was poor” card again? “I left the White House $16 million in debt”? They did steal the silver leaving there. Do you remember that? They did, folks, for you young-uns out there that don’t know, the Clintons stole silverware out of the White House when they packed up and moved out. What is this? “You typically have ignored gaping facts in describing.” And he goes on to talk about all the women he hired. Well, we know that and half of them were on his couch half the time.

(Clinton impression) “I had a lot of women work for me. I had I had sexual harassment policy when I was governor. I was exempt. Ha-ha! Everybody else had to abide by it but not me ’cause Hillary covered for me. Hillary covered for me. That’s the only reason I survived this, Hillary covered and, damn it, she was supposed to win this election, it’s payback. If Hillary had won this election I had have been through with this, but now, now that she lost I gotta relive this whole election. The last one in 2008, Obama came along, both these elections Hillary’s supposed to win so we could forget about all this. Now I’m forever gonna get blamed ’cause she lost ’cause of Lewinsky, ’cause of this, ’cause Monica this and that. Everything has gone wrong. That’s why I got together with Patterson to write this stupid book that he wrote and I’m putting my name on it. I hope you buy it ’cause I’m dirt poor.”

That’s Clinton’s story. Sheesh. I can understand why Mika Brzezinski thinks she’s listening to Trump here. Don’t misunderstand. Next question from Greg Melvin. I guarantee you Clinton is wishing that Matt Lauer were in there. Melvin says, “Look, I asked you if you’d ever apologized to her. And you said that you had?”

MELVIN: You’ve apologized to her?

CLINTON: I apologized to everybody in the world.

MELVIN: But you didn’t apologize to her?

CLINTON: I have not talked to her. I have never talked to her. But I did say publicly on more than one occasion that I was sorry. That’s very different. The apology was public. Do you think President Kennedy should have resigned? Do you believe President Johnson should have resigned? Someone should ask you these questions because of the way you formulate the questions. I dealt with it 20 years ago plus, and the American people, two-thirds of them, stayed with me, and I tried to do a good job since then with my life and with my work. That’s all I have to say to you.

RUSH: (Clinton impression) “You’re forgetting all the good stuff I’ve done in Haiti. Yeah, I went down there and we got all of kinds of money given to people in Haiti. I got my cut. I got out of there with Hillary, got our share, but they wouldn’t have had anything if it weren’t for us. I apologized to everybody. I didn’t talk to Monica. Well, she was listening when I apologized everybody. She knows. She knows. She was one of the luckiest women in the — any other 19-year-old would have been happy and would have written about it as the greatest thing that ever happened.

“But, no, Linda Tripp got hold of her, and that was it. And then Hillary never let go of that. If she’d just won this damn election, you wouldn’t even be asking me. And I had to write this book with Patterson. Why don’t you ask Patterson a question? Why don’t you ask Patterson if he cheated on his wife? Why you focus on me? I’ve dealt with this. I’ve dealt with this 20 years ago. The American people were with me. And you’re trying to drive a wedge between me and the American people. I’m not answering that. You just can’t change the facts way you’re doing. I just resent the hell out of this. First Obama, then Trump. Damn it all to hell.”