RUSH: This is on C-SPAN3 today. They actually played a videotape of a Brookings Institution panel (that’s a think tank) that happened last Thursday, May 31st. It was about social media and false information.

See, in Washington, in the think tanks, the intellectuals there are devastated. They think they’ve lost control of opinion-making to social media, to talk radio, and to any number of outside/agitator-type forces. They really believe that they were the opinion-makers with their newspaper columns of long ago, their principled behavior on all the Sunday shows. They were the wise men. They were the people. Back in the days of the three networks, this might have been true.

These people were the opinion makers, people like James Reston and Anthony Lewis and Flora Lewis at the New York Times, back when having a column was really a rare thing. Now everybody has one, like a radio show. Everybody has a social media profile. So the people they at the think tanks are constantly wringing their hands over their loss of influence and their lack of the dominating ability to make and shape public opinion. So they had a seminar on this at the Brookings Institution last Thursday.

And in the audience… He was not participating. In the audience was Washington Post columnist E. J. Dionne Jr. — who, I must say, has been fascinated with me and this program since it began, because he doesn’t understand it. He has never been able to understand it. He’d been cordial. He’s been critical, but he’s been cordial. He’s not been one of these unfair, mean-spirited types throwing things around. And I’ve met him a couple times. And he’s always been, as I say, cordial. But he was so bothered by what he was hearing in the seminar that he stood up in the audience and asked a question… 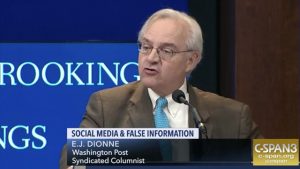 DIONNE: I’ve never fully understood the answer to this question, which is, “Why is it that conservative radio took off in a way that liberal radio never did it?” And it’s not entirely true in television, for example, where eventually, when MSNBC went more liberal, it actually discovered there was an audience there. It never worked for radio. And, you know, I — I — I — can’t believe it’s simply Rush Limbaugh’s, uh, genius in creating this form which he dominates, I’ll say, credit for.

RUSH: Right. So it can’t just be my genius, which he’s acknowledging. These people have been… Ever since they started throwing competitors… You remember the first competitor they threw up at this show? (interruption) That’s right. (interruption) Who was he? He was a Texas… He was in the Texas government, like the budget director. (interruption) James Hightower! They threw him up and he bombed out. Then they threw Mario “The Pious,” and then they threw Gary Hart(pence). I mean, they threw a lot of ’em at me.

Then they got Air America, and they all just drifted away. They all just fell by the wayside. And E. J. Dionne Jr. has been curious. “What is it about talk radio that the liberals haven’t been able to get in on? Why is it that the “genius” of Rush Limbaugh in his invention of the format dominates it? Well, they had a guy that tried to answer this. And if you want to find out why these people are no longer the opinion-makers, it’s because they don’t know what they’re talking about.

And they are so steeped in prejudice and misconception and groupthink. The guy that’s gonna answer this is Matthew Jordan, Penn State University media studies professor. So this guy is a professor at Penn State, and he’s teaching young skulls full of mush about the media and perhaps even explaining to his young skulls full of mush why the genius Rush Limbaugh dominates talk radio whereas decent, good people — the liberals — do not. Here is his theory.

JORDAN: If you think about the movie Talk Radio, right? Uh, it’s based on this shock jock Alec Berg [sic] in Denver who was killed. That does a good job of describing the intimate outrage generation amongst the audience, right? There’s something about the moment that that came on in the 1980s, people were starting to feel dispossessed, and shock jock radio appealed to a the kind of notion of personal freedom that pushed back against kind of vague forms of authority that were keeping the workingman down. And so the shock jock is about the guy who straight talks, who says what’s true, having somebody who’s willing to say anything. I mean, Trump is a shock jock. 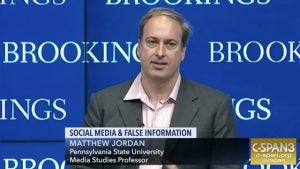 I would think… Just as a professional, I would think they’d be trying to find this out. So this guy says Trump’s a shock jock. So he’s part of the crew that believes this program and others like it paved the way for Trump. Shock jockery, mean-spiritedness, racism, bigotry! You know, all these ingredients thrown in. Whereas this man has shown literally no — he’s not alone — no interest in finding out why people do have a bond this program. They have likewise not spent any time or energy trying to figure out the bond that Trump voters have with him.

I would think as professionals that would be the first thing they would try to understand if they want to defeat it. “What’s that bond? How did Trump do it? Why did it develop? Why do people trust him?” Whatever they want to ask. But, no! They chalk it up to their usual bromides, shock jockery, bigotry, anti-authoritarianism, saying anything, anti-establishmentarianism, whatever it is — and they attach that theory to everybody who’s not them. It’s intellectual laziness! This program is many things, but it isn’t shock jockery. To the people that listen to this program, it’s the most informed, it’s the most honest, and it’s the most fun — and in fact, it’s addictive. But you’re never gonna see me come up with an app on my store designed to get you to listen less.