Trump Tweets About the IG Report

RUSH: Trump tweeted this morning, “What is taking so long with the Inspector General’s Report on Crooked Hillary and Slippery James Comey. Numerous delays. Hope Report is not being changed and made weaker! There are so many horrible things to tell, the public has the right to know. Transparency!” [sic] We’ve been hearing about the inspector general report for weeks now. It has been imminent for weeks. (For those of you in Rio Linda, “imminent” means “any moment.”) Now, what has been going on with this? 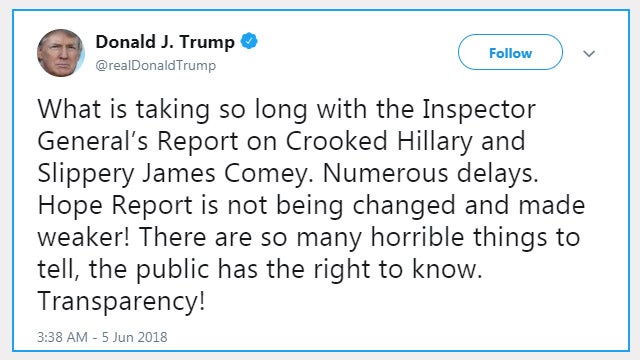 By law, the inspector general report, when he finishes it, is shown to the people that are mentioned in it — and in some cases, their lawyers — at which time they are thus given ample time to prepare a defense or to lobby to have what is said about them removed. Now, since the IG report has been announced as completed and as having been circulated throughout Washington where people named in it can see how they’re named, there are two interesting things of note. A lot of people have started resigning from a lot of places.

People have started resigning from the FBI. We’ve had a bunch of lawyers resign from their firms, one of them Perkins Coie. There’s some others. But you know what’s really remarkable about this, Mr. Snerdley? Not a single leak. Not a… This is the first massive-size document that has anything to do with the intelligence agencies, the deep state, the Washington establishment that has not leaked. Now, the significance of that is that it must be pretty damning. It must be pretty big if nobody is leaking anything here.