RUSH: We have a statement from Trey Gowdy on the inspector general report. This statement may explain some of the previous statements that Trey Gowdy has made about the FBI-DOJ. I will explain as we go through it, ’cause you know he’s been kind of frustrating lately by defending them and talking about how filled with honor they are and we just assume, “Well, he’s a fellow prosecutor! He doesn’t want to condemn these guys. He’s one of them.” But there may be more to it than that. 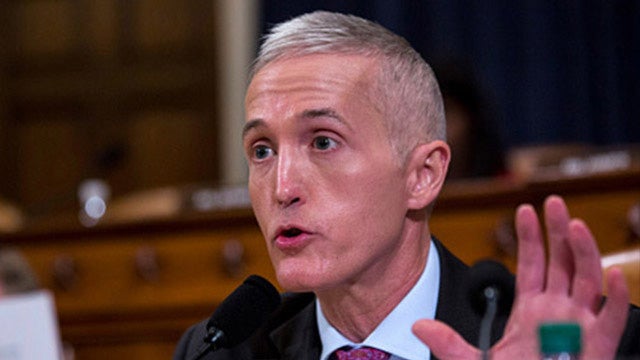 “I am alarmed, angered, and deeply disappointed by the inspector general’s finding of numerous failures by DOJ and FBI in investigating potential Espionage Act violations by former Secretary of State Hillary Clinton. This report confirms investigative decisions made by the FBI during the pendency of this investigation were unprecedented and deviated from traditional investigative procedures in favor of a much more permissive and voluntary approach.

“This is not the way normal investigations are run. The investigation was mishandled. The investigatory conclusions were reached before the end of the witness interviews.” This, we knew. “The July 5th press conference marked a serious violation of policy and process. And the letters to Congress in the fall of 2016 were both delayed in substance and unnecessary in form. Moreover,” writes Trey Gowdy, “the treatment afforded to former Secretary Clinton and other potential subjects and targets was starkly different from the FBI’s investigation into Trump campaign officials. …

“The report also conclusively shows an alarming and destructive level of animus displayed by top officials at the FBI. Peter Strzok’s manifest bias trending toward animus casts a pall on this investigation.” Don’t forget August 16th, 2016, Lisa Page (summarized exchange), “There’s no way Trump can win, right? He can’t win, right?” And Strzok responds to her, “No. We won’t let that happen.” Gowdy says, “This is not the FBI I know. This is not the FBI our country needs.

“This is not the FBI citizens and suspects alike deserve.” He’s just contradicted himself. I think we may now know why he recently said, “This is an FBI that every citizen could be proud of.” He wanted to portray himself as totally open-minded for when this thing came out. “It is now urgently incumbent on Attorney General Sessions and Director Wray to take decisive action to restore Americans’ confidence in our justice system.”