RUSH: I don’t know how they’re gonna enforce it. That’s… Ha! I don’t care when it is. You can’t look at another employee for longer than five seconds. What I can’t wait for is the first complaint. Some Netflix employee says, “He looked at me for seven seconds! I felt stalked! I felt like I was being predator’d! I felt like I was going to be attacked. Seven seconds.” Can you imagine the arbitration hearing over that? “Well, how do you know it was seven seconds?” “‘Cause I have my phone timer. It’s already the foreground app. All I have to do is hit the start button. I know, I know,” and they flash the app at ’em. 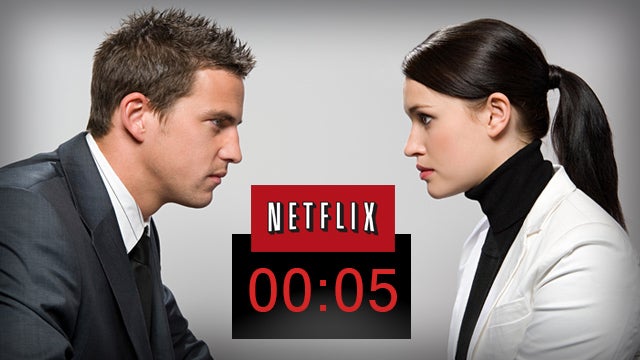 How do you defend?

“No, I didn’t look her for more than four seconds.” (laughing)

That’s the left for you.

RUSH: “Netflix has reportedly banned workers from looking at each other for more than five seconds as part of its new anti-harassment rules. The new policy also bans the company’s film crews from asking their colleagues for their phone numbers, according to an article in the Sun. ‘Senior staff went to a harassment meeting to learn what is and isn’t appropriate,’ an on-set runner told the Sun. ‘Looking at anyone longer than five seconds is considered creepy.'” Okay. So let’s see… (interruption) What do you mean, you think it’s anti-male? (interruption) I know. “Men can’t help.” That’s what you’re saying, right, is “Men can’t help looking,” right?

“It’s genetic code. I mean, it’s how we’re made. It’s what leads to babies. It’s what sustains life,” right? “Men looking at women and dreaming.” I don’t know. What if you’re standing behind somebody? They’re sitting at a desk, you’re walking behind, and you stop, and they don’t even know you’re looking at them? I mean, how does this get enforced? Are they gonna have people in every office with stopwatches doing nothing but monitoring the glances of Netflix employees? But don’t stop here. You have to look at…

This is liberalism. This is the kind of thing they do that they believe is improving human rights and respect. Snerdley thinks that it’s anti-male. (interruption) Well, Snerdley, you know, women stare at other women more than they stare at men — or at least an equal amount of time — for different reasons. But they do it. What’s next? What’s next? The penalty for this. What is that gonna be? How’s that gonna be decided? Once they institute policies like this, this is never the end of anything. It’s never the solution. It’s just the beginning of a whole new set of problems.

That’s how we end up with a daily loss via a very tiny, daily encroachment of freedom, with the left wanting to monitor and control the behavior of as many people as they can.