The Big NFL See, I Told You So

RUSH: In answer to some email questions: Yes, I’m gonna get to the NFL story that I’ve been hyping the past two days. By now, I’ve kind of raised expectations. It’s not that big a deal. It’s just a gigantic See, I Told You So. I mean, it’s a bull’s-eye See, I Told You So. Cookie sent me a note. I woke up today and I already had a note from Cookie, “Can you give me a hint? I’l go find the audio.” I said, “There isn’t any audio. It’s a published piece. Even if there was audio, I wouldn’t use it for this source.” It’s even been on her mind.

RUSH: Let me get this NFL thing out of the way. I fear I may have been talking about this for two or three days and I’ve built up an expectation here that can’t be met. But let’s see. When the first signs of trouble in the NFL popped up — and they were actually before Colin Kaepernick decided to take a knee during the anthem. There were other indications — during Black Lives Matter protests and other things — that the NFL was being politicized. I made a series of predictions that would eventually redefine the game to be something that current fans will not find compelling or interesting. 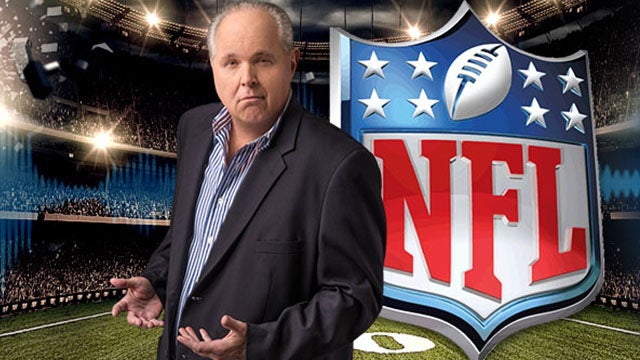 Essentially the insertion of politics into the game, when you look at professional sports as an escape from the humdrum, from the controversial, an escape. It’s playtime. You know, it’s make-believe. At the end of the day, it really doesn’t matter. It’s serious if you’re a fan, but it doesn’t matter to your life. If your team wins or loses, it could affect your attitude and all that, but it’s basically something you set aside over here — it’s the one place in life you can invest total passion without consequence.

Let’s just leave it at that. There’s nowhere else in life you can do that. Try telling your boss every day how much you love the job. Tell your boss every day how much you love him. Tell the boss every day you’ll do anything. What’s gonna eventually happen to you? (chuckles) You’re gonna end up being a gopher. You’re gonna be looked at as the sap who will do anything — and behind your back, people are gonna be joking. You’re never gonna get a significant raise because nobody is ever gonna be threatened that you would ever leave.

That’s why people are guarded. That’s why people have to put limits on exuberance and happiness lest people get the wrong idea. But in sports, you can go all out! You can take the boundaries away, and your team? They may lose, and they may disappoint you, but they will try to take your house away from you — and your team cannot fire you. Of course, unless you work for them — in which case, we’re talking a different set of ingredients anyway.

So that’s why… That’s the great thing about it. You can invest all you have in your team. But that’s ending. By the time you inject politics into this. Now you’ve got other factors that determine whether or not a fan likes a team or a player, and that’s gonna be the beginning of the end. It’s gonna take some time. One of the things that I predicted (just to cut to the chase here), after the Kaepernick thing happened — and I tell you, when it really began was this concussion business, if you recall.

I said, “You just wait. When somebody figures that out and actually starts putting that in daily commentary about what’s wrong with the NFL.” Well, it’s happened. That prediction has come true, and I want to read to you from the publication. I don’t want to mention the reporter’s name ’cause he isn’t worth it — and I’m not gonna mention the publication ’cause that would enable you to go out and find it. I really don’t want to mention this reporter’s name. The only difference between a bag of excrement and this guy is the bag. Okay?

“The NFL is supposed to be … ‘a buffer,’ and ‘a concentration camp for adolescents and a Disneyland for adults.’ Instead, we are seeing football … as a center of the rebellion against both our racist system of police violence and mass incarceration as well as resistance to Donald Trump. By taking knees during the anthem, the kids in the ‘concentration camps’ and the performers in the Adult Disneyland are doing more than showcasing a political resistance. They are brashly and boldly displaying an independence from what they are supposed to be doing.

“They are refusing to be a buffer,” the escape people are using them for. “They are rejecting the idea that they will be part of the ‘theatrics of a dying empire'” of the NFL. “Instead, they are living by the credo set forth by Muhammad Ali, who said, ‘I don’t have to be what you want me to be.’ This is polarizing,” the players are engaging in “polarizing” behavior. It’s “enraging in some quarters, and political red meat for Trump’s frothing base. But for NFL owners, the threat is far more daunting:

“To [NFL owners], it’s players refusing to be mere extensions of equipment on the field or robots advancing the ball. It’s players noticing … that the league is not in fact integrated. It’s segregated, with mostly black bodies taking all the risk, pain, and traumatic brain injury, while an almost entirely white ownership class reaps the rewards.” And there it is! Now it’s out there. This is the one element I have been waiting to happen. This is going to be defined as modern-day slavery, an equivalent to modern-day slavery.

You have these rich, white, billionaire owners, and they’ve done everything they could to hide the evidence of brain damage via concussions. And they’ve sent their players, mostly black, to go out there and risk their lives, to risk their limbs, to put their families at risk all for the financial benefit of the rich, white, billionaire owners. It was only a matter of time before this analogy was realized by the leftists who are trying to do great damage to the game, and now it’s happened. Now, it was published… 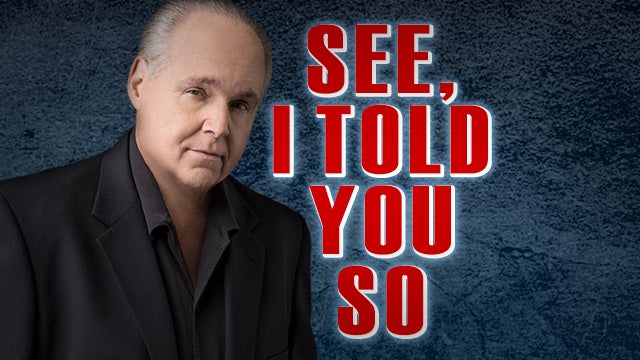 I saw it three or four days ago, however long I’ve been talking about it. And, granted, it hasn’t established or created its own momentum. I haven’t seen others pick this up yet. Maybe they have. I haven’t been watching a whole lot of sports lately, but maybe they have. But never mind. Maybe they will. As we get into the season with the first serious injury of an African-American player, I guarantee you thrown into the mix with all the Kaepernick stuff and the first black player that kneels and breaks the rule, this analogy is gonna be recalled and remembered.

And it won’t be long — in fact, maybe you’ve heard. I could be behind the game here. Maybe it’s already been stated in places like SportsCenter or Bleacher Report or “Instant Chat” or wherever. But once it is and becomes mainstream — and it will — then you can say good-bye. Nobody wants to, I mean, get into an argument about whether slavery still exists in America. It’s crazy. To try to convince the NFL players, 75% of them African-American, are modern-day slaves because these white billionaire owners don’t care?

Sending ’em out there to get concussions, sending ’em out there to die early, to commit suicide, suffer major injuries that shorten their lives? Believe me, the people targeting this game are going to be making that case big time. Probably not ’til the season begins. They’ll need some events to occur to trigger the usage of this acknowledgment or this recognition. But I wanted to point it out to you because this has gotta be… However long we’ve been talking about concussions and the NFL trying to hide the evidence and the increased risk these players are taking with their lives and their futures, suicide. However long it’s been going on.

Four years ago, I made this prediction. Now it’s finally happened.

I know these people.

It is uncanny how it mirrors James Comey’s press conference on July 5th. It really is, folks. Remember how Comey went through a long list of the various laws and regulations that Hillary violated. In fact, if you recall when he did that, many of us who still thought that Comey was on the right side of law and order — I was one of them. Until that July 5th press conference, I actually believed all the publicity and spin and buzz about Comey. I thought he was Mr. Integrity. I knew that he was Republican.

I knew he’d worked for John Ashcroft, who is also Mr. Integrity, and I thought that Comey as an FBI director was smack-dab down the middle. And I was surprised. Because I thought Comey was a straight shooter, when he went through all of the crimes that Hillary committed and then announced that he wasn’t charging her, I gave him the benefit of the doubt then. I opined that, “You know what? He probably just can’t bring himself to charge the duly nominated Democrat candidate for president. Comey doesn’t want to be the guy responsible for taking out a candidate.” (laughing) 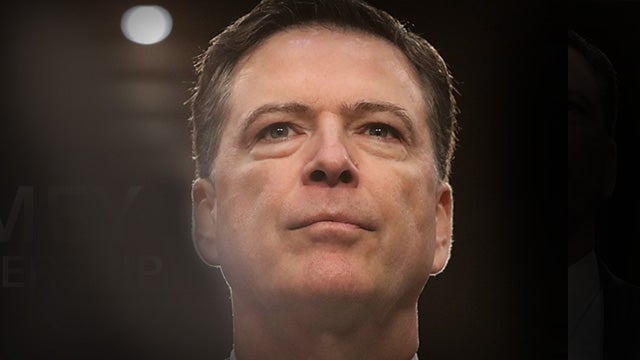 But I was giving Comey the benefit of the doubt. I really thought he was trying to help the American people understand what she did since she was gonna get away with it. It didn’t take me long to figure out that what he was doing was actually engaging in a long-thought-out, conceived and executed strategy to exonerate her. So he goes through all the crimes. I mean, it was detailed. Remember that? It was detailed, all the violations, the things she did with her server and where she had done them and so forth.

And then he said… Inventing part of the law that doesn’t exist, he said that he couldn’t find any “intent.” They just couldn’t find where she intended to break these laws and commit these violations, and so no reasonable prosecutor would charge her. The inspector general report is almost identical to this in structure. Horowitz carefully outlines all of the wrongdoing that went on at the FBI during their investigation of Hillary, for 568 pages. He lists every offense. He gives the supporting documentation and evidence but concludes there was no bias — and, therefore, nobody did anything wrong. It’s uncanny, the similarities between Comey’s press conference and this IG report in terms of how both seek to exonerate the without-any-doubt-about-it guilty.