Trump: The U.S. Will Not Be a Migrant Camp on My Watch

RUSH: We’ve got some sound bites in from Trump here just this afternoon the White House. And they’re gonna go nuts. They’re gonna go literally nuts — the media, the Democrats, the Drive-Bys — after hearing Trump make these comments. Here’s the first of three…

THE PRESIDENT: I’ll say very honestly and I’ll say it very straight: Immigration is the fault — and all of the problems that we’re having — ’cause we cannot get them to sign legislation. I say it’s very strongly the Democrats’ fault. Their obstruction. The United States will not be a migrant camp, and it will not be a refugee-holding facility. It won’t be! You look at what’s happening in Europe; you look at what’s happening in other places. We can’t allow that to happen to the United States. Not on my watch. 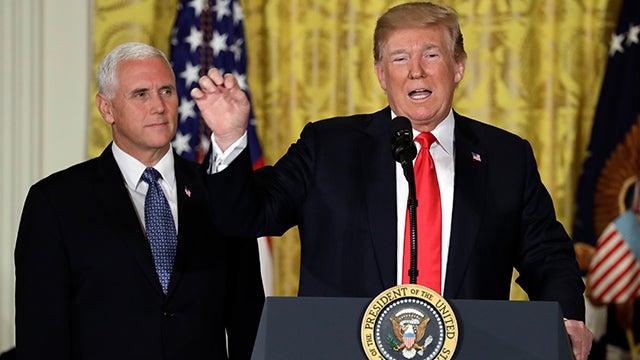 RUSH: And he means it, and that just frosts them, because that is what they want to happen. They want the United States to become a migrant camp. Those are future Democrat voters dependent on government! They want the United States to be a refugee-holding facility. They want to claim credit for being the only ones with compassion caring about the downtrodden, which this is a scheme. It is a targeted plan that the Democrats are in on, and Trump is exactly right about what’s happening in Europe, Germany, the U.K. They have lost their borders! They’ve lost their culture in many places. He’s not gonna let it happen here. Here’s sound bite No. 2.

THE PRESIDENT: We have the worst immigration laws in the entire world. Nobody has such sad, such bad — and actually, in many cases, such horrible and tough. You see about child separation. You see what’s going on there. But just remember: A country without borders is not a country at all. We need borders. We need security. We need safety. We have to take care of our people. We want a merit-based immigration system, not based on a lottery or not people that snuck across the border — and they could be murderers and thieves and so much else. So we want a safe country, and it starts with the borders, and that’s the way it is.

RUSH: This is almost a reprise of his announcement for president back in 2015 down the bottom of the escalator (summarized): “We have to take care of our people, not based on a lottery, not people that snuck across the border who could be murderers and thieves.” This is all about a last ditch push for amnesty, folks. So many Republican leaders are retiring. The Democrats starting to worry they may not have this big blue wave and win the House. This is a last-ditch effort to force Trump to sign comprehensive immigration reform, granting amnesty not just to these families of refugees, but to every illegal immigrant in the country.