RUSH: Grab sound bite No. 23. I wasn’t gonna play this, but I’m gonna play it. Stuart Varney, Fox Business Channel, loves Donald Trump — and appropriately so. And he’s doing an interview with Doug Schoen, the archaic, old-fashioned Democrat. When you think of the Democrat Party as it used to be, this is the guy — and I don’t mean to call him a dinosaur. He’s a decent guy. He’s not a radical progressive leftist. 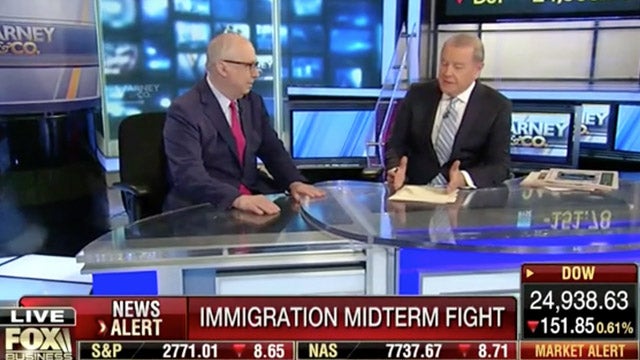 But he votes them. So he’s one of these guys that does not like the direction the Democrat Party is going, and he’s right to be concerned about it. He’s a regular contributor, analyst, whatever, at the Fox News Channel. He was with Stuart Varney today at the Fox Business Network. You know, Laura Bush has an op-ed in the Washington Post. For eight years of her husband’s presidency, Laura Bush didn’t see fit one time to be critical of the Democrats trying to destroy her husband and who were following her daughters around trying to embarrass them.

She didn’t see one reason, have one occasion during the eight years of Barack Obama and Michelle (My Belle) Obama to find any criticism there, despite the dismantling of the American health care system and all the other things that Obama was doing that were stagnating (at best) the U.S. economy. Now all of a sudden, Laura Bush is appalled, outraged, very depressed over what’s happening with the separation-of-families issue, and here’s Varney and Doug Schoen talking about this just today…

VARNEY: On this issue of the separation of families, I think the Democrats are winning.

SCHOEN: I think they are. When you have Melania Trump and Laura Bush both expressing reservations, I think there’s a political problem — for the first time, Stuart — for the Republicans and the Trump administration on immigration.

RUSH: Okay. What’s this about? Why does Stuart Varney — who, by the way, don’t misunderstand. I like Stuart very much. I met Stuart once when he was at CNN. I had to be over there for some reason. I forget what it was, back when they were right off Eighth Avenue, Mr. Snerdley, right on the other side of Madison Square Garden. I walked over there some reason and ran into Stuart Varney. He was in the greenroom being made up, and he stopped what he was doing to shake my hand. He’s a great guy.

What’s happening here? Schoen… I can understand Schoen is a Democrat. Whether he’s an archaic one or modern-day one, he’s still a Democrat. I think they’re reacting to the media, which is what people in the media do, like CNN’s dumb-ass headline… Sorry, my friends. As you know’s dumb, stupid headline, “Outrage Grows over U.S. Separating Immigrant Families.” It’s manufactured! It’s all political. I maintain to you that nobody really cares about this, because if they did, lots would have been done to fix it years ago when it began.

But it began for solid legal reasons, not political, and that’s what I want to try to up pack here. But their perception is Republicans are losing this, that the Democrats are winning it simply based on the media. They’re winning it as a political argument, which is why so many people are ticked off at Washington anyway. What goes on in Washington — who wins and who loses there — is not what matters. I’m talking politically, not substantively. But it just shows you how people can be swayed and how they can be trapped.