RUSH: Let’s go to the audio sound bites. I want you to hear a Border Patrol agent educating CNN’s Brooke Baldwin on what illegal immigrant parents are doing to their own children.

Now, this is important. This happened on CNN yesterday. The parents are endangering the children. Oh, let me repeat this one more time. I threw this in right with the closing moments of the previous order. Does anybody…? Would you like to know where the origin of this law is? Why does this law exist? Aside from the Ninth Circuit and its ruling, why is any of this happening in the first place? Well, I’ll tell you, and it’s a law passed by Congress and signed by previous presidents.

The reason for all of this was to discourage people from attempting to come into the country illegally. It was to discourage parents in Guatemala, El Salvador, and Nicaragua, you name it, from sending their kids unaccompanied through Mexico to the United States. This was designed to be an impediment. And it didn’t work. These parents in these Central American countries put their kids on trains and buses and trucks, unaccompanied, and sent ’em to the United States anyway. But the reason this exists was as a deterrent! It wasn’t to be punitive.

Anyway, CNN yesterday afternoon, the infobabe Brooke Baldwin speaking with National Border Control Council Spokesman Chris Cabrera about the so-called border crisis and separating children from people who come here illegally. Question: “On the recording that ProPublica got inside the detention center, you hear this Border Patrol agent speaking about the cries of children saying, ‘We have an orchestra,’ and then the next one says, ‘Well, all we need is a conductor.’ I need to have you respond to that.” In other words, what she’s saying is somebody’s accusing these crying kids of being led, of being instructed.

So she’s righteously indignant and she’s demanding that this Border Patrol guy respond to that.

CABRERA: I don’t think people understand what’s actually happening down there. You have a lot of these kids come down here that are put through terrible, the terrible situations by their parents. And all this can be avoided if they just go through the port of entry. If you guys have seen some of the stuff that we’ve seen down here, you would understand just how important it is to have a tough stance to divert people from coming here. When you see a 12-year-old girl with a Plan B pill or their parents put her on birth control because they know that getting violated is part of the journey —

CABRERA: — that’s just a terrible way to live. When you see a four-year-old girl traveling completely alone with just her parents’ phone number written across her shirt? I mean, come on, now.

RUSH: Well, this didn’t fly. This guy’s not supposed to talk like this. This is not what the news is supposed to be! But there you have it. “If you could see some of the stuff that we’ve seen down here…” By the way, the agents themselves are coming in for their share of grief because of course they are the prison camp guards in the Nazi analogy. These are the guys sending people into the gas chambers, according to Michael Hayden and some of these other deranged leftists who are trying to draw some comparison to this.

(chuckles) Nazi Germany. So the agents… These are the guys sitting around getting fat, dumb, and happy stealing whatever these poor people have and then sending them off to these detention centers. It’s not at all what’s going on. (chuckles) These people are the front-line defense against the assault and the invasion that’s taking place. He says, “If you had seen some of the stuff that we’ve seen down here, you would understand how important it is to have a tough stance to divert people from coming here.” That’s exactly what the purpose of the law was and is!

A 12-year-old girl with a Plan B pill! Her parents put her on birth control ’cause they know that getting violated is part of the journey, and they sent the girl anyway! You might have heard the CNN infobabe go “ugh” as if she either didn’t believe it or did believe it and thought it was outrageous. Here’s the next bite. The question: “Okay, keeping the focus on the kids, America’s outraged by what’s happening, and I ask you: As a Border Patrol agent, can you assure everybody watching that you and your Border Patrol colleagues are treating these children humanely?”

Anyway, here’s the guy’s answer to that question… 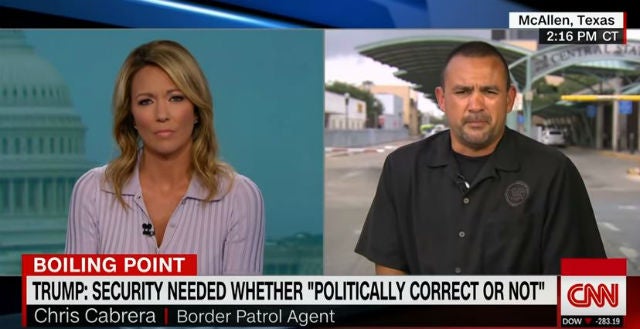 CHRIS CABRERA: I can tell you with absolute certainty that they’re being treated humanely. Nobody saves more lives along the southwestern border than the U.S. Border Patrol. These kids are traveling solo across two or three countries, and when they get here, they’re reunited with the families. To me, it’s just mind-blowing because you can’t do that as a United States citizen, you can’t send your five-year-old kids to ride on top of a train to three states and when they get there, they’re coming back to you. You’d get prosecuted.

RUSH: Damn straight! You’d have your kids taken away. Look what happened to Romney when he put his dog on the roof of the station wagon. They denied him the presidency! Can you imagine putting your kid on the roof of a train and sending them down to Guatemala? Can you imagine what American authorities would do to you if you do that? That’s right. You can’t even put your dog atop the station wagon on a family vacation, and you better be traveling with your kid without a safety seat back there or else you’re also gonna go to jail. But we’re sitting here supporting and understanding parents in Guatemala who send their little girls north knowing that they’re gonna get raped.

So they give ’em a Plan B abortion packet! Interesting they can get hold of that, too, isn’t it? They’re starving, they’re thirsty, they’re coming from war-torn regions. But whenever they need a Plan B abortion kit for the daughter, it’s somehow easily attainable. This is just sick. Thank you, Democrat Party, and thank you, media.