RUSH: Here’s Martin Savidge of CNN, as I say, on safari to Trump country. He went to Mesa, Arizona. There’s a border crisis there separating children from people who came here illegally.

Here’s the first sound bite of his report…

SAVIDGE: What you won’t find, especially among Trump fans, is sympathy for immigrant families separated at the border.

MAN: These people that we have coming across the border illegally are breaking the rules. I have no feeling for them at all.

WOMAN: It’s not about Mexicans. That’s what everybody’s so angry about. It’s not!

SAVIDGE: You think that people are living off of the state —

SAVIDGE: — but not doing it legally?

SAVIDGE: You hear a lot of anger. And a lot of the president’s own arguments, especially that many of the immigrants are actually criminals posing as parents.

MAN: Now, when you have a bad guy coming across, kidnapping a kid and trying to come across? I don’t buy that.

WOMAN: Quit trying to make us teary-eyed for the children! Yes, I love children a great deal. But, to me, it’s up to the parents to do things rightfully and legally.

SAVIDGE: You support the president 100%? 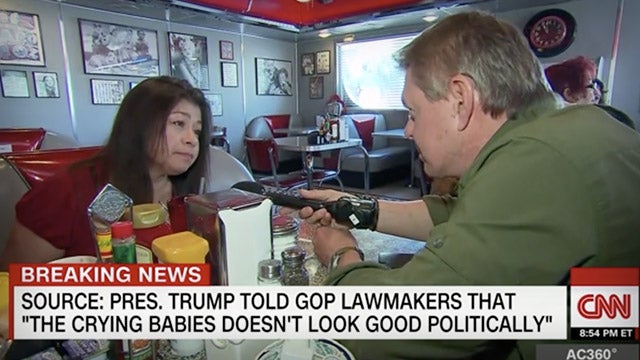 RUSH: Well, didn’t get what he wanted. He’s trying to get some Trump supporters expressing doubts. He wanted to hear Trump supporters saying they’re getting a little nervous that Trump may be about to cave. No, he didn’t get any of that. He instead got people saying, “Look. If you’ve got trafficker kidnapping a kid, showing up at the border pretending to be the father of the kid, the son, we’re not buying that.” And a woman said, “Quit trying to make us feel teary-eyed for the children. Yeah, I love children a great deal.

“But to me it’s up to the parents to do things rightfully and illegally.” (chuckling) That kind of comment isn’t gonna fly, not in this day and age, ’cause it’s too correct. I mean, it is… These families in Central America are separating themselves, sending tehir kids up on this long trek to get here. Trump isn’t separating anybody. United States law is. Here one more Savidge bite we can squeeze in here. Yes. Same report in Mesa, Arizona, trying to find doubtful Trump supporters.

SAVIDGE: Not all Trump supporters feel that way. In a trendy watering hole in Scottsdale, I meet up with four conservative friends. Despite the stereotypical image of Trump supporters, they’re not old, angry, or altogether white. They’re young, highly educated professionals with immigrant histories in their families.

MAN: At the end of the day, the zero tolerance is about enforcing the law. 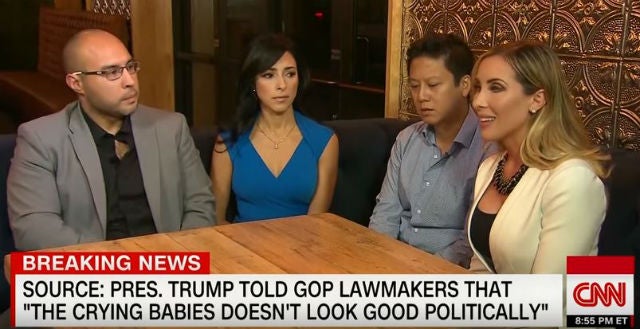 SAVIDGE: They all like Trump’s tougher stand on border protection, but all feel it’s going too far.

MAN: It wasn’t well thought out.

WOMAN: The Statue of Liberty says, “Give us … your huddled masses,” (sic) and so I want to remain a country that that’s our motto.

SAVIDGE: They all don’t believe Trump likes taking kids from their parents. Instead, they see what’s happening as an unintended consequence of a stricter policy.

RUSH: Well, that’s closer to the truth than the fact that Trump’s letting it. But here’s another thing. Look, I don’t mean to nitpick. The Statue of Liberty has nothing to do with immigration. The Statue of Liberty has been hijacked by open-border activists, and that one phrase, “Give us your poor, your tired, your thirsty, your huddled masses and let ’em in!” That’s nothing to do with immigration, legal or otherwise. But that’s kind of blowing against the wind, too, trying to tell people the truth about that