Son of Mario the Pious Sues Trump, Exposes Himself as Hypocrite


RUSH: So, ladies and gentlemen, one of the things I predicted yesterday was that Trump’s executive order would not survive a lawsuit, that somebody would come along and sue Trump on the basis he doesn’t have the executive authority to do what he did even though they were all demanding that he do it. Now, some of you have written me. I don’t know if you’re seminar emailers like we had a seminar caller yesterday or whether you’re just playing devil’s advocate.

But one of the letters, one of the emails I got was somebody saying, “You say Trump is playing these people and is four or five moves ahead of ’em. What if it’s the other way around? What if it’s the Democrats are four or five moves ahead of him?” And then they constructed a scenario. “So they demand that Trump do something about separation of families. They demand it, they demand it, they demand it — and Trump caves, and he gives them the executive order, and then they know it won’t work.

“So then they turn around and sue him making his executive order irrelevant, and then they report as though Trump knew it was gonna be irrelevant.” Now, I appreciate this kind of thinking, because I love taking on these questions or these devil’s advocate assertions. The idea that the media is two to three steps ahead of Trump? (laughing) Reality argues against that. If the media were two or three steps ahead of Trump, he’d be gone. He’d be in big, big trouble. His approval numbers would be down in the twenties or thirties like they were able to drive George W. Bush’s numbers down.

No, no. In this case, they demanded, they demanded… You see, with the media… Remember here, the media is the Democrat Party. So the media/Democrats, are seeking electoral political advantage over Trump, and in this whole emotional play of children separated from their families, they want the high ground. They want to appear as though only they care about children staying with families, when an examination of real life would prove that they don’t care about that, from Planned Parenthood to AFDC to any number of policies Democrats have enacted that split families up — including silly redefinitions of what a family is.

But they want the moral high ground, as Democrats, as people who are going to get votes. “They care about the children, and Trump doesn’t, and the Republicans don’t. They’re mean-spirited and all of that.” So they force and they force and they force. They pummel Trump. They have picture after picture. They accuse Trump of not caring! Children are getting sick and dying. They’re being held in cages. You know the drill. So Trump caves — and to prove that the media’s not two or three steps ahead, what was their first reaction when Trump signed his executive order?

Also, Trump and his people know that this executive order’s not gonna survive the week. So the media’s out there claiming credit for it. The media has now started… They’ve been forced to report things they were omitting and ignoring in demanding that Trump do something with an executive order. Trump legally can’t, which is why this executive order of his is going to evaporate because his executive order cannot supersede a federal statute that has been affirmed by the Ninth Circuit Court of Appeals.

This is the Flores ruling that says children can’t be detained any longer than 20 days.

They have to be let loose after 20 days, regardless where their parents are. That’s how the separation results. Liberal immigration law and policy gave us the separation of immigrant families by requiring that immigrant children, illegal immigrant children cannot be held longer than 20 days. Trump’s executive order says (paraphrased), “Oh, yes, they can. They can be held in perpetuity in detainment centers with their parents.” Well, the law says they can’t do that; that’s why his executive order’s not gonna survive. They had to know this but they did it anyway.

Now, the Democrats are saying, “He just did it for the temporary political effect. He just did it so that he could have people see that he cares about kids, but he knew.” They’re totally gobsmacked by this, and the news stories that I have assembled here today all illustrate that. Andrew Cuomo, son of Mario “The Pious” has an op-ed in the New York Times: “A Moral Outrage New York Will Not Tolerate.” Let’s go to audio sound bite No. 4, No. 5. Andrew Cuomo as predicted here yesterday, suing Trump over immigration, sound bite No. 1. 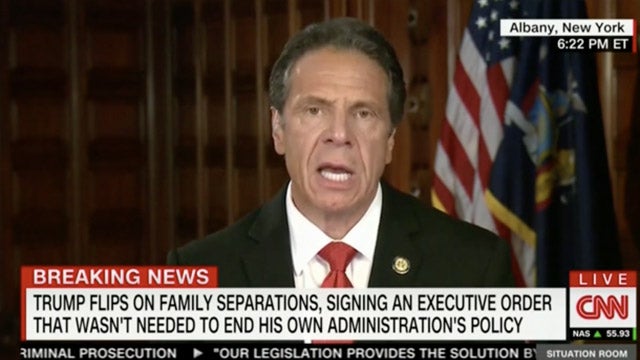 CUOMO: The basis of the lawsuit is very simple. It is a violation of the due process of the parents and of the children. This executive order I don’t think does anything of legal significance. I think it’s more of a press release than a legal document. And if you read it, it basically says unless they go to a court and get the court to change what’s called the Flores decision, the Flores settlement — which has been a 20-year-long court battle — you can’t implement this.

They ignored it totally. The New York Times told people it didn’t even exist, that there was no law preventing Trump from what he did in his executive order. Maggie Haberman and her crew at the New York Times were reporting that Trump was lying when he said there was a law preventing him doing what he did with his EO. They said there was no law. Then Trump signs his executive order. Now they’re all talking about the Flores decision preventing Trump from doing it.

They’re the ones who have been totally exposed. Not just the Democrats. The media as well. They never reported a word about this Flores settlement. It’s 20 years old. Meaning, again, that illegal immigrant children separated from their parents ’cause the parents are being charged cannot be detained longer than 20 days. So 20 days comes, you’ve got to let them go, parents still in jail; ergo, family separation. How did it happen? Democrat immigration law.

That’s what Trump and Kirstjen Nielsen have been saying. Well, the Democrats haven’t been reporting that because it doesn’t serve their purpose. Now all of a sudden when they want to make it look like Trump doesn’t know what he’s doing and Trump is overstepping his executive authority, now they start citing the Flores settlement. So here’s the rest of the son of Mario Pious in this sound bite.

CUOMO: — the zero tolerance, they arrest the parent. When you arrest the parent, the question became, “What do you do with the child?” Because you cannot by law, by the Flores decision, put the child in a detention facility.

RUSH: Well, you can’t for longer than 20 days. You gotta let ’em go. Now, this all happened on CNN last night where they thought they were gonna just embarrass Trump and blow his executive order to smithereens. Wolf Blitzer said, “The executive order says that the president orders the attorney general to promptly file a request with the U.S. district court for the central district of California to modify the Flores decision. Would that solve this issue if you can only detain the children for 20 days?”

CUOMO: If you could have modified the decision, you wouldn’t have had the problem in the first place. Now their answer is, “We’ll go back to court and see if the court will allow us to put the children into detention center.” My guess is they won’t. They’re using the 2,000 children as political pawns to put pressure on Congress. But this executive order is not gonna do it. And using 2,000 children — pulling them out of the arms of their parents — is as disgusting a process as I’ve ever seen, and it really says as a country we should take a look in the mirror, and, duhhh, are we still the United States of America? 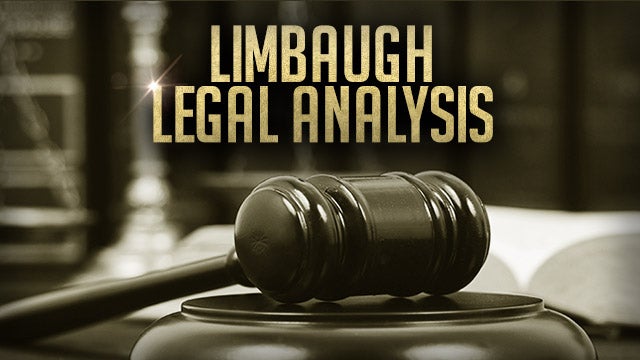 RUSH: Okay. So now Trump is fully exposing these people for the hypocrites that they are. The 2,000 children. Remember, we’re talking 12,000, and only 2,000 of them are in question. Ten thousand, nobody’s got a beef about. There are 2,000 here that are without their parents and so forth. So Cuomo here is accusing Trump of using these 2,000 as a political pawn to put pressure on Congress. Put pressure on Congress? The Trump administration’s been saying, “We can’t do anything without breaking the law! You need to change the law.”

The media and Cuomo were demanding that Trump break the law with an executive order — and when he did, they then turned around and accused him of breaking the law. Now Cuomo’s gonna sue on the basis the executive order is unconstitutional and illegal and is now totally reversing the reality of the situation. “Pulling these children out of the arms of their parents is a disgusting process.” That is existing law that was written and passed by Democrats in Congress.