What Does Mark Warner Know?

RUSH: Mark Warner was speaking to a bunch of donors. You know, these donor events… Folks, these things are different. I’ve been to a bunch of them, and candidates say things to donors that they do not say in public. And they always tell the donors to shut up and don’t repeat it. I’ve been to a number of these things. It’s where Obama started talking about bitter clingers. There happened to be a San Francisco journalist in there who heard it and reported it. Well, somebody heard what Mark Warner said while assuming adult beverages at a donor event on Martha’s Vineyard about Robert Mueller.

RUSH: I was at a donor event in Palm Beach with George W. Bush. It was a palatial estate, and I was an invited guest, not a donor, but I was an invited guest since he was in town. After the meet-and-greet and the cocktail party, little finger sandwiches, the hors d’oeuvres, the donors gathered outside and the president addressed them for 45 minutes. And I remember telling you about this when it happened. 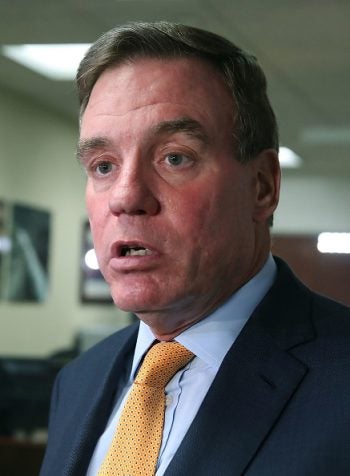 He’s going through things that are happening. He takes people around the world, what’s going on with the ChiComs and Russia and so forth and so on. And I forget what it was, but he got to something and he looked right at me, “Don’t you tell anybody this on the air, got me? You don’t say a word about this.” And I look around to make sure he was looking at me, and he was. And I didn’t repeat it. That was the deal attending these things. These are off-record.

I’ve been to a couple others. Candidates really open up for donors. Donors are who they care about. You could have a candidate who could have a guy on the radio or TV who does nothing but praise and promote a candidate and it won’t matter a hill of beans to the candidate against somebody who gives him a hundred thousand dollars. I’m not kidding you, folks. You give somebody big money, and they know who you are, where you are, what you’re doing, they want to know what you think. That’s the name of the game.

And when I heard that Mark Warner was attending one of these donor things on Martha’s Vineyard — he-he-he — that told me who was there. Of course, he’s a Democrat. But it was big, big money, I mean, the kind of money that people think Democrats don’t have. These Democrats are socialists, they care about the little guy. They’re not partying where other people can’t show up, when of course they are.

Now, one of the things that Warner said — and there was media there, and there’s not supposed to be. Warner said he told Democrats to buckle up. He joked that he might reveal sensitive information known only to him and the special counsel Robert Mueller. He said, “If you get me one more glass of wine, I’ll tell you stuff only Bob Mueller and I know. If you think you’ve seen wild stuff so far, buckle up. It’s gonna be a wild couple of months.”

Warner’s office did not immediately respond to questions about this from Fox News. He’s the ranking member of the Senate Intelligence Committee. This was at a dinner for over 100 guests as part of the Democrat Senatorial Campaign Committee. It’s the annual Majority Trust Retreat. So they need time to come up with how they’re gonna spin this. And the fact that he said, “If you get me one more glass of wine” is what they’re gonna focus on. “Well, course, the guy was a little tipsy. He’s with donors. He’s with friends. He’s not worried about anything. He’s having some wine. Of course he didn’t mean anything by it.”

BS. BS. I think that he thinks he knows something. I mean, one thing, you don’t tease donors like this. Folks, donors are sacrosanct. Donors are, you don’t joke with ’em, you don’t run the risk of doing anything to make ’em take their money away. I think it’s something that a lot of people don’t know, the hold that donors have. I mean, you think you know it. You think you know that donors are demanding that Ryan and the Republican leadership do amnesty. Yeah, you know that, but you don’t know how important these donors are. 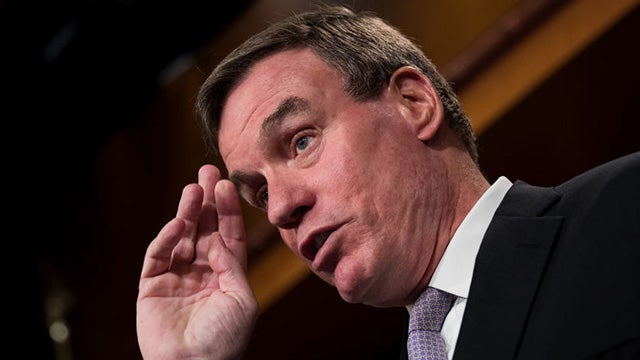 Candidates will forget people they’ve met along the way no matter how supportive, no matter how famous, they never forget a donor and they never forget the amount. I once gave — I got roped into this way back when. I was doing this program. I got roped into giving a Senate candidate a thousand dollars. I got phone calls, I got cards, I got letters, “Thank you so much,” from the candidate. I had said positive, supportive things about this guy for years and never heard a word. And even when I run into him, no acknowledgment that I had ever said anything positive.

When I sent this thousand bucks in, you would have thought that I had given him everything he wanted. I’m telling you. Now, you may already know this and think I’m a little over the top in it. But I’m telling you, I’m not. So what I was saying to these donors, the donors get to hear secret stuff that nobody else hears, and they’re not toyed with like this.

But they now gotta find a way to spin this, because now people are wondering, well, what does Warner know, and how does he know it? Is Mueller talking to him? Is there some kind of conspiracy, Mueller working with the Democrats on this? There will be people tracking this down.

RUSH: So Democrat Senator Mark Warner, consuming adult beverages over at Martha’s Vineyard, says to his donors, “If you get me one more glass of wine, I’ll tell you stuff only Bob Mueller and I know. If you think you’ve seen wild stuff so far, buckle up. It’s gonna be a wild couple of months.” 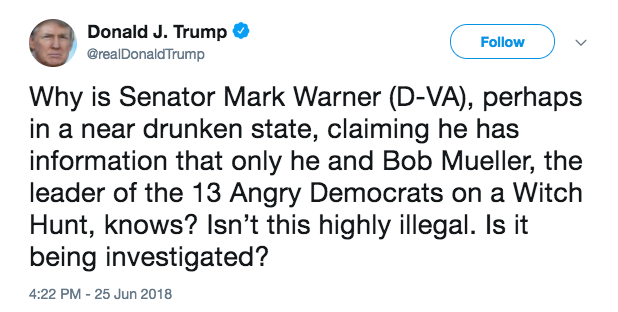 Fox News says everybody understood this to be a joke. President Trump did not take it as a joke. President Trump tweeted, “Why is Senator Mark Warner (D-VA), perhaps in a near drunken state, claiming he has information that only he and Bob Mueller, the leader of the 13 Angry Democrats on a Witch Hunt, knows? Isn’t this highly illegal. Is it being investigated?”

Here you have a United States senator alluding to secret information only he and the special counsel are aware of. Well, as always, Trump has a point. You know, if you play the what-if game or the reverse situation game and imagine that it is a Republican senator talking about secret information he has on a Democrat president — ha — it would be the lead item in all of the news.