Last Chance for Our Store Special

RUSH: Ladies and gentlemen, we have a special little deal going at the brand-new EIB Store at RushLimbaugh.com. I told you about this yesterday. We’re doing this in honor of Independence Day. We have reintroduced the store. We’ve reopened it. We’ve restocked it with brand-new stuff, really, really cool polo shirts and baseball or golf caps, T-shirts, any number of things.

We’re really, really proud of it, and we’re offering a little special in honor of the Fourth of July coming up. If you purchase two apparel items, like one of the new New Era caps which I love and a T-shirt — and you would do that anyway, so you’re not gonna be asked to do anything you wouldn’t otherwise do. If you buy two apparel items, we’re going to include a very cute Rush bear. This Rush bear, it’s white, it’s dressed in a colonial outfit, blue colonial outfit, miniature American flag that it’s waving around there. 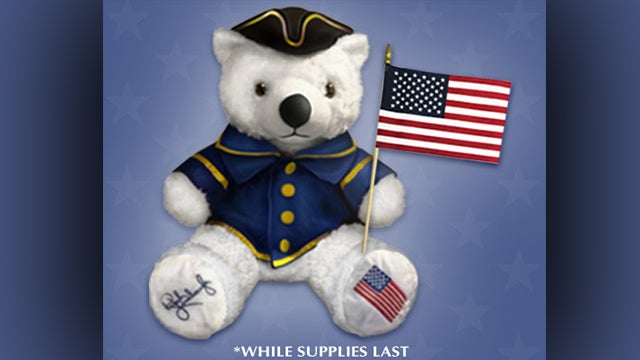 I’m not a big stuffed animal guy. But this thing, the Rush bear, it’s so darn cute with this little American flag stitched on one paw, my signature stitched on the other. I have one sitting in my library at home. And when you go to the store and you start shopping, this thing, this bear, while supplies last, by the way, will just automatically appear in your cart. You don’t have to do anything to get it and it’s el freebo. And we’re doing this in honor of the Fourth of July.

So all you do is go to the store. You can do it at RushLimbaugh.com on the Web or use our app, which is also relatively new, and fabulous and great. And, by the way, just today we hit a brand-new all-time high membership at Rush 24/7, and I’m eternally thankful and grateful to all of you for making that happen. It’s all exciting, and it’s all good. Now, this offer with the free bear is good only through tonight at midnight Eastern, or until supplies of the bear last. So hurry, get your order in as soon as you can.

Remember, some of the proceeds from the new online Rush store go to the Marine Corps-Law Enforcement Foundation, which is a phenomenal organization dedicated to providing college scholarships to the children of fallen heroes in the Marine Corps and it’s expanded to other services in cases of big, major catastrophic events.

So Fourth of July next week, we’re throwing the bear in, the patriotic bear with what you would buy anyway. If you’re gonna go to the store anyway, you’d buy a couple things, couple of apparel items, so it’s at RushLimbaugh.com on the Web or easily accessible on the brand-new RushLimbaugh.com app for both iOS and Android.