RUSH: I have a story in The Stack today about a heat wave in the Northeast, in Boston, in Maine, in Connecticut. It was 11 days of absolute hell. And it was before air-conditioning.

People were committing suicide in this heat wave because it was so dastardly. Tar was actually bubbling where they had used it on roadways and so forth. Railroad tracks were being bent out of shape because of the heat. Now, this is 1911. The St. Louis Cardinals were on a train, the baseball team was on a train that got derailed because of this heat wave. They were on their way to Boston to play the Boston Braves.

Now, I betcha back then, whenever this was, they thought, “Wow, this is crazy weather.” There’s no crazy weather. The weather is normal and natural. Now, are there lunatics who think they can control it and are out there claiming and professing to try? I have no doubt that there’s some people in the defense department in various countries around the world who are experimenting with these kinds of things. 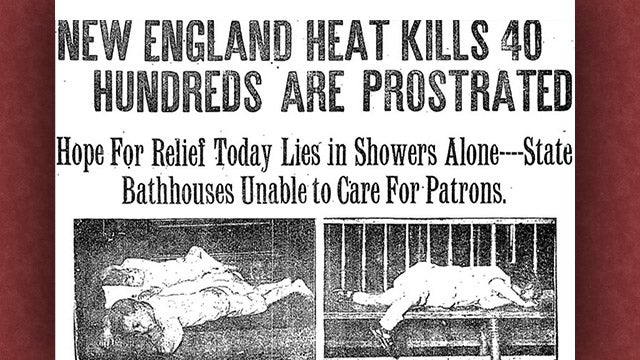 If we’ve got the ability to do this, then why are there still droughts? One of the efforts here with all of this cloud seeding and stuff and other things has been to take the strength out of hurricanes. Now, one of the things you can do — well, we can’t do it. But one of the things nature does to eliminate hurricanes after they form is — I don’t know what the meteorological terminology for this is — but the meteorological or atmospheric conditions literally rip the tops off of the hurricanes, and when that happens, they fall apart.

There have been people who’ve said, like Algore (imitating Gore), “We need to make the ocean cooler. If we could cool the water temperature in the ocean then these hurricanes wouldn’t be nearly as strong. Or we could fly some planes — we’re already fly planes in to examine hurricanes. Let’s seed these hurricanes and bust ’em up.”

Well, sounds mighty nice and it sounds very intriguing except we’ve never pulled any of this off. But that doesn’t mean that there aren’t people trying to do it. I’m not saying that’s not the case. There are nuts and wackos everywhere who think they can control nature. And they’ve been with us for as long as human beings have walked or driven the earth.

But I find most people’s historical perspective begins with the day they were born. And, by the same token, the climate change crowd relies on something that is very easy to peddle, and that is this point in time. On the timeline of all human history, when we all happen to be alive, which is probably no bigger than a speck of dust in atmospheric terms, in terms of the actual timeline of the universe and humanity, when we are all alive is when it’s normal!

Yes, isn’t that miraculous? And any variation from what we think normal is, “Oh, my God. There’s climate change, Mabel, oh, my God. It’s warming up. Oh, my God, it’s freezing out.” They have successfully made people believe, because it’s very easy to, that when you’re alive is when things are normal. But who are we to say that at this point in time — this is July 5th, 2018 — who are we to say that today is the way it is, quote, unquote, normal?

Why wasn’t it normal 4,000 years ago? Why wasn’t it normal 2,500 year? Why is it normal now? Well, it’s normal now because that’s when we are alive. Our vanity is such, this is when it’s normal, that’s how we can categorize any changes. We have to call the way things are now perfectly normal and any variation they can then say, “See? We are causing it.” When they don’t know diddly-squat about what’s normal.

We haven’t been measuring atmospheric conditions, temperature, weather for nearly long enough to know what normal is. We have no clue what normal is. By the same token, crazy weather, the weather’s been crazy. The weather’s always crazy. How many of you have heard of this the heat wave? Let me take a break. I’m gonna go get the story. I’ve got it in the Stack somewhere here. I know it was 1911.

Oh, another verbal error I made. I said Justice Thomas rewrote Obamacare. I meant Justice Roberts, of course.

“Tar in the streets bubbled like hot syrup. Trees shed their leaves, grass turned to dust and cows’ milk started to dry up. In every major northeastern city, the sweltering heat drove people to suicide. On July 4, temperatures hit 103 in Portland,” this would be Maine. “104 in Boston,” and that’s a record that still stands to this day.

The high temperature on July 4th in Boston happened in 1911, 104 degrees. It reached 105 in Vernon, Vermont, 106 in Nashua, New Hampshire, and Bangor, Maine. “Two hundred people died from drowning, trying to cool off in rivers, lakes, ponds and ocean – anything wet. Still more died from heat stroke. The 1911 heat wave was possibly the worst weather disaster in New England’s history, with estimates of the death toll as high as 2,000.”

Air-conditioning wasn’t discovered, invented till 1902 by Willis Carrier, but it didn’t become commercially available for many, many moons after that. So people are running around, “Oh, my God! This heat wave is incredibly hot.” It happens every summer. It happens every July. It gets hot. You got Algore out there warning, “It’s very, very hot, people could die, climate change.” We haven’t had a heat wave like this nationwide since 1911.

Now, why wasn’t 1911 normal? You think people alive in 1911 thought that what the weather then was was normal? I’m assuring you they did because it’s a characteristic of humanity, that when you’re alive is when things matter. Historical perspective beginning with the day you’re born. Anything that happened before that doesn’t matter. And whatever happens during your lifetime is either better or worse than it’s ever been. Everybody thinks this. And there are leftists who come along and exploit this to push their political issues.

I would tell you what I think’s going on here, folks, we’ve all grown up with air-conditioning somewhere. Those who don’t have it at home have been able to access it somewhere. I think people’s tolerance for heat is way down. Have you ever stopped to think, as somebody who played baseball as a kid, I cannot imagine, I literally cannot imagine a major league or any locker room without air-conditioning.

I can’t imagine playing baseball June, July, August, Chicago, St. Louis with wool uniforms, shirts, all the layers they wore, and then getting on a train that’s not air-conditioned to go to the next city wherever you’re playing your next series. No air-conditioning, maybe at your hotel, but even then for much of professional baseball there wasn’t air-conditioning anyway. And yet they did it. There were no complaints about it because that’s all people knew.

Look at photographs of successful CEOs from the era prior to air-conditioning, and they’re decked out wearing ties and tight collars and vests and so forth in the heat of summer. That’s all they knew. They adapted. Human beings adapt amazingly. But in the era of air-conditioning where many people have never experienced not having it, well, of course 90 degrees, 95 is gonna seem insufferably hot, high humidity.

But it’s nothing new. And to start saying that it is and it’s worse than ever, all to advance some silly, stupid political idea like climate change, that we’re making it hotter, the evidence is all against these assertions.