THE VICE PRESIDENT: Great to be back on, Rush. Thanks so much for all you do. I’m speaking to you from my office at the United States Capitol. I just escorted Judge Brett Kavanaugh to the office of Senate majority leader to begin the process of what we hope and trust will be his confirmation as the newest justice to the Supreme Court of the United States. But great to be with you.

RUSH: Thank you. Now, let me ask you, I’ve got some quotes here. Nancy Pelosi, quote, “Civilization as we know it today is at risk in this election and with this selection.” What is your timetable, Mr. Vice President, for ending civilization?

THE VICE PRESIDENT: (Laughing), you know, it is amazing the rhetoric coming from the left on this.

RUSH: Well, we have even more. We have Terry McAuliffe. Terry McAuliffe in Virginia says that “Kavanaugh will threaten the lives of millions of Americans.” How many lives do we expect to lose as a result of this selection?

THE VICE PRESIDENT: Yeah, I’ve heard the term “constitutional crisis.” What I can tell you is that the president last night in Judge Kavanaugh kept his word to the American people, and he nominated a judge to the Supreme Court of the United States who will faithfully interpret the Constitution as written. I couldn’t be more proud of the president’s choice. And I have to tell you, he is off to a great start.

I don’t know who couldn’t have been moved last night to hear his personal story, but also to hear him speak about that judicial philosophy. It’s a philosophy you’ve talked about for years on this program, Rush. You know, to say that, as Judge Kavanaugh has said and written, the judge’s job is to interpret the law, not to make the law or make policy. And when you look at his record, you look at his record on the Second Amendment, on limited government, on federalism, on religious liberty, one after another, 300 cases over 12 years of time, what you see is a consistent and principled conservative jurist in Judge Brett Kavanaugh, who will make a great justice on the Supreme Court.

RUSH: Well, you mentioned the life story. There’s so many things last night that we learned that have not been reported any time ever. His work with the homeless, feeding the homeless through Catholic Charities, coaching the girls basketball team, the nickname Coach K, everybody understood and laughed at that. The man has devoted his whole life, it seems, to doing what he believes to be the right thing. It’s unassailable, and yet they’re gonna go after him.

It’s really not him, in my humble opinion, Mr. Vice President, they’re going after the Constitution. The Constitution is the threat, the original intent and judging it in that way, that’s the real threat to the left here because their efforts are to undermine it. And so anybody the president would have chosen with a similar philosophy, you’d be facing the same level of attack today as Justice Kavanaugh is getting. So you must have thought, the president, your team must have thought that he’s confirmable, maybe more so than some of the other people on your list. What’s the timetable for moving this forward?

THE VICE PRESIDENT: Our goal is to see this new justice to the Supreme Court confirmed and sworn in before the court convenes on October 1st. But I’ll tell you, we’re just gonna put our head down. I just literally came from a meeting with the Senate majority leader. We’re gonna put our head down and work hard. And sitting there as I was with Judge Kavanaugh, I know he’s absolutely determined to meet with every member of the Senate, Republican or Democrat who will meet with him, talk about his record and take his case to them and by them to the American people. 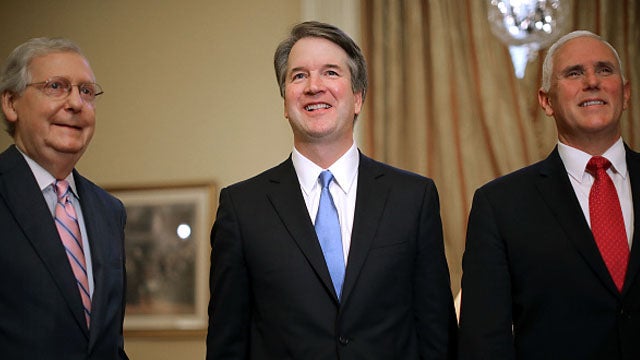 But I gotta tell you, I love what you just said. Their argument is more with the Constitution of the United States. And what you have in Judge Kavanaugh is a constitutional conservative. In fact, there’s a great piece, I just got pointed out, Maureen Scalia, the wife of the late, great Justice Antonin Scalia was there last night, as she was when Justice Neil Gorsuch was introduced to the American people, and Maureen and I had some time together. Two of her sons were there. In fact, when we stepped back into the Blue Room, one of her sons, who’s a priest, did what he did the night Justice Gorsuch was introduced. We all basically gathered in a circle, and we all had a prayer for Judge Kavanaugh and for his family. And it was just a very special moment.

But there’s a piece that just posted, Rush, on National Review by Ed Whelan about remarks that Judge Kavanaugh made about Justice Scalia back — I guess it was in June of 2016. And, you know, I had the opportunity, the president asked me to meet with Judge Kavanaugh during the deliberation. I met with a number of the finalists.

So I’m not surprised to see this, but I think your millions of listeners would be so heartened. I mean, after he says that he loved the guy, he describes Justice Scalia as someone who was and remains a hero and role model to him. And he went on to say in this speech back in 2016 that Scalia thought carefully about his principles, he articulated them, he stood up to them, and he did not buckle to political or academic pressure. That is Judge Brett Kavanaugh.

RUSH: Well, Mr. Vice President, when I watched last night, I saw his family, his wife, his two daughters, and I have to tell you, I suffered some heartbreak already for what they’re gonna go through. It’s just atrocious. Now, I know that they’re aware of it. They have to know. But those two young girls are very, very young, and his wife, they’re gonna get savaged.

Are they — it’s such a tough question. Are they ready for this? Are they fully aware of what is going to befall them? And I really hope that our side has a way of limiting and nuking that and shaming that so that that doesn’t happen as it has usually happened in the past, what has happened to these families. This family, the Kavanaugh family by all measure is classic American.

THE VICE PRESIDENT: Well, they really are. How much did you love the moment when he said, “I’m known as Judge Kavanaugh, but I’ll always reserve that title for my mom.”

THE VICE PRESIDENT: Who was a schoolteacher who goes to law school and becomes a prosecutor, a trailblazer. She was there last night, along with his dad. And then to say, you know, but then she became a judge. So to him, “Judge Kavanaugh” will always be his mom. Look. Let me say, in choosing Judge Kavanaugh, President Trump really believed that he had the character, the strength, the qualifications, and the record to be a great justice to the Supreme Court and to go through this process. 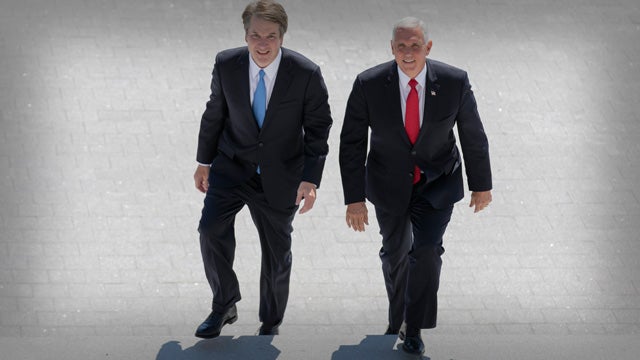 THE VICE PRESIDENT: There were a lot of thumbs up, a lot of “Hi, Judge.” And, you know, I think, to your point, the more the American people get to know this good man, this good family and this great record of a constitutional conservative, 12 years on the court, 300 decisions, I mean, you look at it, Rush, and you understand this stuff.

And here’s a guy that I think about a dozen of his opinions actually were adopted by the Supreme Court of the United States. So now they are part of the law of the land. And he wrote them on the lower court. And sometimes they were dissenting opinions that the Supreme Court then adopted as the right view. That shows you the level of respect —

THE VICE PRESIDENT: — that he commands. And I think that’s gonna become more and more obvious.

RUSH: Plus the clerks that he has fed to various justices. Well, Mr. Vice President, look, I really appreciate your time. I know you’re swamped and you’ve got this going on. I just want to share one thing with you. I just found a piece from the Daily Mail that may give a bit of insight about how the opposition’s gonna try to slow you down here.

RUSH: And that’s focusing on his five years as staff secretary to George W. Bush and whatever paper trail there might be there that the Federalist Society or nobody else has any idea of that would be strictly related to policy, not jurisprudence. So they’re gonna turn up every rock they can. And it looks like they can’t stop him right now. This is a choice, it looks like you’ve got the votes as we sit here today, but they’re still gonna try to fundraise off of it. I know you’ve got this under control. I’m glad you called. It’s a great thrill to have you back on the program.

RUSH: It really is. 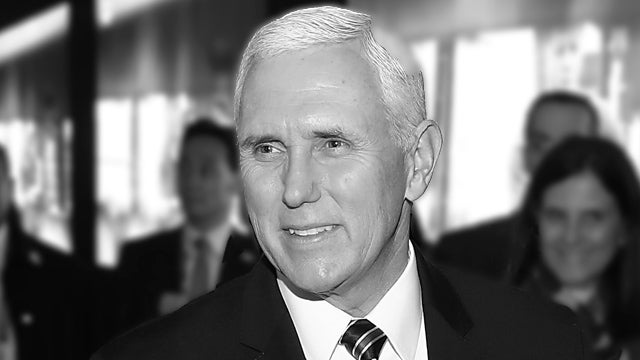 THE VICE PRESIDENT: It’s an honor for me, Rush. Just thanks for all you do. Your voice is a national treasure. And we appreciate your attention and support on this. We’ve got some work to do. I just encourage all your listeners to let their voice be heard.

RUSH: Oh, they will!

THE VICE PRESIDENT: Brett Kavanaugh is the right judge at the right time. And he’ll make a great justice on the Supreme Court.

RUSH: Vice President Mike Pence. Thank you so much. Once again, great, great, great to have him back on the program.

RUSH: Did you people, did you notice how evasive the vice president was when I asked the timetable for ending civilization? He didn’t answer that question, folks. He-he-he. Did you hear him evade when I asked him how many deaths he expects? Terry McAuliffe says that millions will die because of this choice. The vice president evasive when I asked for specific numbers expected here.

I mean, this is how crazy this is. And nobody, nobody has the guts to go out and attack or characterize these idiotic claims by Pelosi and McAuliffe, which is why I put the question to the vice president that way.

Now, he mentioned this piece by Ed Whelan at National Review. During the break I went and looked at it. I didn’t have a chance to digest the whole thing, but this is the article Vice President Pence mentioned. “Judge Kavanaugh on Justice Scalia: ‘A Hero and a Role Model.'” And he describes Scalia as somebody who was and remains a hero and role model to him. He went on to say in that the speech back in 2016 that Scalia thought carefully about his principles, he articulated ’em, stood up for ’em, did not buckle to political or academic pressure. Kavanaugh duly impressed by this.

And the amazing thing — the vice president referenced this — it’s also in the story. The United States Supreme Court has adopted the logic found in Kavanaugh opinions as a circuit judge on the D.C. Circuit court of appeals, 11 of his opinions. The logic of 11 of his opinions has been accepted and adopted by the United States Supreme Court in rulings subsequent to the opinions rendered by Judge Kavanaugh.

That is incredible! That is a lot of opinions. He has also, apparently, provided a clerk feeder service. The clerks that have worked for Kavanaugh have been sought by Supreme Court justices from across the spectrum. So when you get down to the man, there’s nothing to criticize in terms of character, citizenship, decent all-round good guy, great family man.