What’s Behind This Axios Poll Telling Democrats They Can’t Win the Senate?

RUSH: Okay, back to this Axios poll. It’s a poll they took with SurveyMonkey, which is a credible bunch. They have a bar, Monkey Bar in New York, SurveyMonkey, same people. You knew that, right? “Brutal poll.” No, I’m making it up. People may not know when I’m kidding. I have to admit when I’m kidding more than ever today. 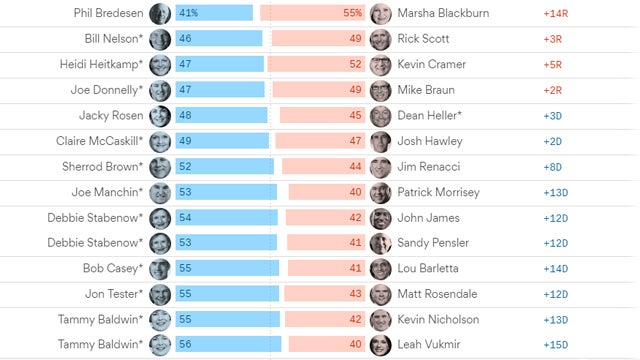 “Democrats’ Senate Dream Slips Away.” They never had a realistic opportunity of taking the Senate. You know, this is another illustration. Ever since election night 2016 when Trump won, the whole mantra has been illegitimate, people don’t really mean this, they voted for Trump, they were mad, but they don’t really like Trump and they’re regretting it. As time went on, they regret Trump won, people regret it, they wish they could vote against him. Next chance they get they’re gonna vote against him.

Right now the Democrats need to hold on to 10 seats in red states that Trump won by double digits. And then, in addition to holding that many, they have to win two pickups. They have to win two seats currently held by Republicans. The odds that they’re gonna win 12 — and the Republicans don’t have to defend nearly as many, this has never been a slam dunk.

But because they created the lying illusion in all of these news reports for many months, now we’re getting down to reality time, so they have to correct this. And they’re using a poll to do it by claiming, “Oh, no, there is a brutal new poll out that shows the dream of the Democrats taking over the Senate is slipping away.” It was never anything but a dream. But, you know, they’re being hoisted on their own petard now, because now they’ve been telling everybody Democrats are gonna win everything, everybody hates Trump, everybody regrets voting for Trump.

And now they have to make it look like the dream is slipping away, like it was a chance, it was a realistic possibility, it was gonna happen, but something’s gone wrong. It was never gonna happen.

“To win the Senate, Democrats need to keep all 10 seats they’re defending in states that President Trump won in 2016 — plus pick up two more seats. That’s not happening. A new Axios/SurveyMonkey poll of key states shows Dems would lose three of those red-state seats while picking up two GOP seats — still short of the majority.”

“It’s looking nearly impossible,” says Axios, “for Democrats to take back the Senate. So the stakes are even higher for them to win the House if they’re going to have any kind of congressional check on President Trump. The polls shows three Democratic senators are poised to lose their seats to Republicans — Heidi Heitkamp in North Dakota, Bill Nelson in Florida and Joe Donnelly in Indiana.”

I said, “You haven’t? I’ve seen them all over the place.”

“What? What ads have you seen?” 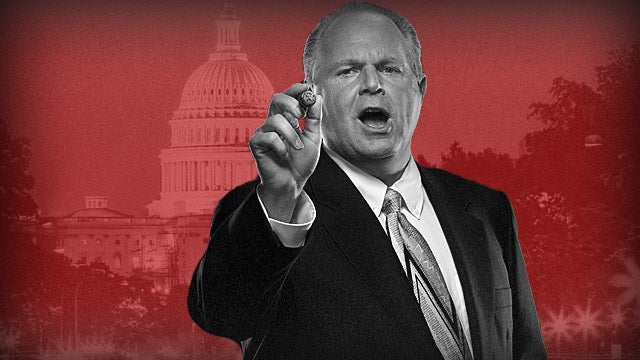 They are the most effective “it’s time to get rid of Bill Nelson” ads I have ever seen. Rick Scott’s not even in ’em. I mean, at the end: I’m Rick Scott, and I look like a turtle, and I paid for this message, but that’s it. (laughing) The ads basically talk about what an antique Bill Nelson is, and they talk about how worse things have gotten as Nelson has been in office. And they show as Nelson has been in office, taxes have gone up. I mean, they’re really, really effective, and they are Rick Scott ads.

But here’s the dirty little secret. Rick Scott has set a fundraising record for governors races in Florida, and nobody knows about it. Ten million bucks in the last reporting. Now, you may think, “Well, that’s not a big deal.” It is. It is. Because Rick Scott’s not on the radar as a top tier candidate running for Senate. But Nelson is in trouble, and this would be a huge flip. It would be huge, ’cause it really is time. Nelson’s just a check-the-box radical leftist himself.

He’s a former astronaut, because he’s been caught up in the Democrat wave here, and he’s been taken far, far left with everybody. I don’t think he really ever was as far left as he’s voting now. So you’ve got him; you’ve got Heidi Heitkamp, who knows it and may end up voting for Kavanaugh to save her seat. Joe Manchin, he’s not up, but here’s what this story says.

“Sens. Joe Manchin in West Virginia and Jon Tester in Montana were losing by double digits to a generic GOP candidate last time we polled these states in February. They’re now leading by double digits. Our data includes an expected range under six different scenarios that measure potential turnout, giving a more complete picture of each race.”

But a lot of Americans don’t pay attention to any of this stuff we’re talking about until it’s time to vote. But they’re out there and they’re consuming news. And I really believe, I really believe we have crossed the tipping point. I believe the left, with this never-ending 30-year cacophony of panic-filled BS reaction that is identical.

We’ve been losing civilization for 30 years. People are gonna die in the millions in 30 years, for whatever causes, whatever reasons, Republicans are behind all of it. None of it’s happening, and I think that more and more average, ordinary people are rejecting the radical left as exemplified by their protesters. And I think more and more Americans, when they see people harassed in restaurants and then thrown out or have to leave, when they see this debacle that happened on the steps of the Supreme Court, that’s not mainstream stuff.

This is not stuff that is attracting support. It’s being applauded by the really small base of radical leftist Democrats, but it’s not persuading. They’re not creating a movement here. I think they’re causing a backlash. But that will never be reported. You just have to trust me. Because the media is always going to invest in the idea that these radical protests are representative of mainstream America. That’s part of the game.

RUSH: As is always the case, there is other news going on out there besides the reaction to Kavanaugh being named to the Supreme Court. We will get to it when we get back from the break here at the top of the hour. I’m still thinking this Axios poll, this monkey business what they might be actually trying to do with this poll.

Well, it’s gotta be for a reason. Nothing happens on the left in a vacuum. There has to be a reason, beyond the fact that it’s just what the poll says. I think the poll, Axios, that’s part of the Politico — it’s Vox, it’s all part of this Millennial uptick mainstream media apparatus now. It’s not fringe, so I think that it’s meant to be a warning to the Democrats to not sacrifice Senate seats to beat Kavanaugh. 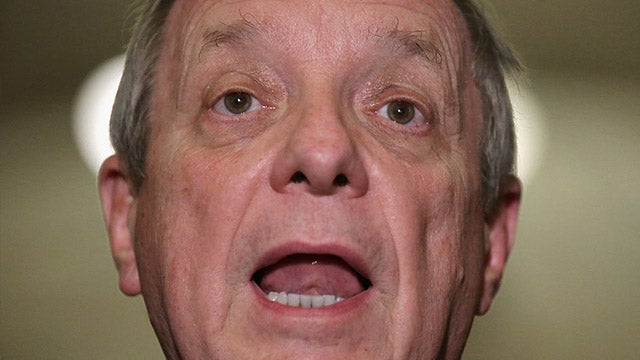 Remember, we had this idiot, this blithering idiot — it’s about time we characterized the man for what he is, Dick Durbin, this blithering idiot. Do you remember this yesterday? Durbin said this Supreme Court is so important that some red state Democrats ought to lose their seats, risk losing their seats. In other words, vote against the guy, even if it means losing the seat, because rejecting this pick is more important than some of these senators’ seats, according to Durbin.

Now, he wasn’t talking about his own seat, no. He was talking about these 10 Democrats in red states. And he was basically saying, “You know, we don’t need you people. We don’t need you people right now. It’s more important to stop this pick if you have to sacrifice your seat to do it.” Well, here comes this Axios poll showing it’s looking like it’s a bad prospect, no way of winning the Senate. So Axios could be backing up Durbin here.

“Hey, we’re gonna lose anyway. You may as well lose with a purpose defeating this idiot,” in their world, Kavanaugh and so forth. It’s something. I think that poll is a warning to Democrats maybe to not do what Durbin is saying, or maybe they’re trying to tell Democrats it’s okay to sacrifice some Senate seats to try to defeat Kavanaugh since they’re not gonna get control of the Senate anyway. But it’s calculated to accomplish something. I’m not quite sure what it is. But all of these polls are not done, they’re not reported in vacuums.

The mainstream media and their polls have studiously avoided talking about the tough chances of taking over the Senate for the Democrats. This is the first. It’s why I made a big deal of it. They’ve made it up to now like the Democrats could very well win the Senate after the blue wave captures the House. And now all of a sudden — and here we are in July, the election is not even until November, and they’re already telling Democrats it’s over, the dream of capturing — there’s a reason for this. And if we’re just patient, the reason will reveal itself.