RUSH: Now Andy McCarthy column today: “Mueller’s Political Indictment.” This is a great piece that rips to shreds Mueller’s indictment on Friday, what it really means. But I want to share with you just a couple of things here. The opening line: “So is Russia now presumed innocent of hacking the 2016 election?” Now, anybody reading that who only knows how the indictments are reported, says, “Whoa, whoa, whoa, whoa.

“Wait a minute! Wait a minute! I read that indictment. They didn’t say Russia’s innocent. They said Russia hacked.” A-ha. Yes. And you’ve been nabbed. Hang on. “So, is Russia now presumed innocent of hacking the 2016 election? If not, it is difficult to understand any proper purpose served by Special Counsel Robert Mueller’s indictment of twelve military officers in the Kremlin’s intelligence services for doing what everybody in America already knew that they did, and has known since before Donald Trump took office — indeed, since before the 2016 election… 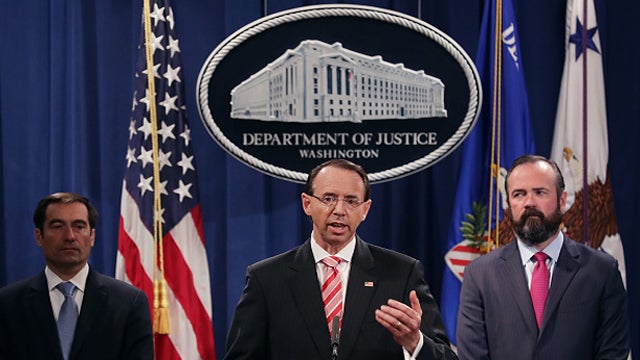 “Oh, and by the way, the answer to the question posed above is, ‘Yes, it is now the official position of the United States that Russia gets our Constitution’s benefit of the doubt.’ Here is Deputy Attorney General Rod Rosenstein announcing the Friday the 13th indictment: ‘In our justice system, everyone who is charged with a crime is presumed innocent unless proven guilty.'” Rosenstein was saying these Russians are innocent until we prove it. Well, guess what? We’re not gonna prove it because there isn’t gonna be a trial, because these Russians are never gonna get served.

And if they are as he needed, they’re not gonna be extradited, and Mueller knows it! Just like he thought the Russian troll farms would never show up in court when one of them did! That’s another no-no today. Putin started talking about Concord Management. You’re not supposed to embarrassing Mueller by pointing out that one of the people he charged showed up and pled not guilty, demanding to see the evidence, and Mueller doesn’t have any, so he won’t produce it. You’re not supposed to bring that up, and Putin did.

And Trump didn’t push back on it. What a bad guy Trump is. And of course the Russians are never gonna be proven guilty. Not in a courtroom, since Rosenstein was invoking!

“As is so often the case in today’s politicized Justice Department, Rosenstein was trying to make a different political point.” Are you ready? “If people whom we have formally charged are presumed innocent, then, a fortiori, people who have not been accused — implicitly, Rosenstein was talking about President Trump — must also be presumed innocent. But, see, you can’t make that point without stepping on the political purpose of Friday’s charade.”

So now Mueller “woven an indictment that can never be tried out of counterintelligence work against foreign governments that is not supposed to be the subject of criminal prosecution.” The subject of public courtroom testing under due process rules is not gonna happen here because it’s gone to the counterintel division where it is gonna get buried.

It is also practically an admission that this case never was a case. There was not a crime specified when Mueller was put in charge. He wasn’t given a specific crime to investigate, so it’s been a fishing expedition, and all of that, with all that time, all that money, they got nothing. They got A total 26 Russian names, trolls and hackers, none of which will ever see the inside all of courtroom, none of which will ever be found guilty of anything.

When all Donald Trump knows is he won the election by outworking everybody. He was clever, more creative, he worked harder than anybody, he inspired more people than Hillary Clinton will in her entire life and afterlife. Why should he admit, why should he take one even half step toward admitting that his presidency, his victory is tainted, tarnished, or even illegitimate? That is a gigantic trap set for him, and he has successfully avoided stepping in it. And they’re ticked off that they’re not able to outsmart the guy.