RUSH: Did you see what the New York Times did? Now, the New York Times is the home of gay rights in American journalism. Can we all agree on that? The New York Times created for their website a cartoon video that shows Trump in his underwear sitting behind Putin alternatively on an animal, then on a rocket ship, and they’re flying through space. 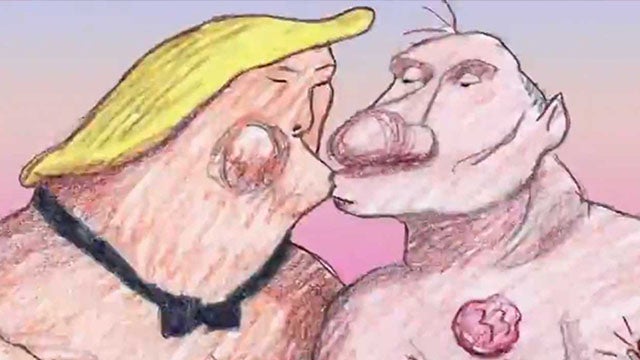 Putin’s not wearing a shirt. They’re portraying gay sex between Putin and Trump all over this video. And when you look at it, say, “This is the home of gay reporting in the United States. Why are they mocking homosexuality? What’s wrong with it? Why insult Trump and Putin by claiming they got a gay sexual relationship going on?”

In the New York Times, that’d be a reason to celebrate Putin and Trump. Except they have this video out there, I mean it is really suggestive. Trump is hugging Putin from behind — folks, you can envision this. Trump in white diaper type underwear looking like the shape of an egg, and Putin’s driving whatever it is, the rocket ship, the motorcycle, it becomes a beast of burden and they’re flying through the air, and a couple of other suggestions in this thing too.