RUSH: Here’s Greg in Bakersfield. It’s great to have you. I’m really glad you waited, too.

CALLER: Thank you, Rush. I know today’s topic is a very serious subject, but I just had to call and let you know I received my white golf cap in the mail a couple of days ago, and it’s gorgeous! (chuckles) My wife, she opened up the Arctic White package and was greeted with the gold lettering — and then a postcard of you, which she’s gonna frame — and she couldn’t get over it. The packaging itself she admired more than the hat.

RUSH: Yeah, I know. The packaging alone is worth buying something. We’ve had a lot of people telling us that.

CALLER: Yeah. She just loved it to pieces. Even the invoice, it’s like three pages thick. (chuckles) It’s nice. 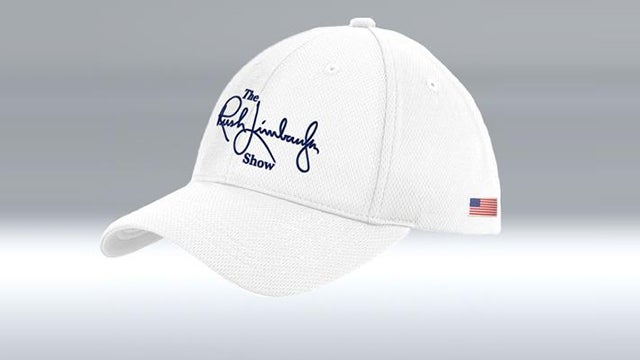 RUSH: Well, we are trying to do this as professionally as we can, and we want every aspect of it to be state-of-the-art, presentable, fashionable. We don’t want anybody to think that we’re just fulfilling orders by grabbing whatever’s ordered, throwing it in a box, putting it in some cellophane, and sending it out to you. Great care goes into every order being fulfilled.

CALLER: Well, she didn’t commission or order a navy one because this is for show. This is to show family and friends, let them open the box and be greeted with gold lettering. So I have to order the… In fact, I saw it. It’s a navy one, I guess it is, or black?

CALLER: It’s navy. Okay. That one looks gorgeous too. So this one goes in the showcase and I’m gonna order another one.

RUSH: Well, God bless you. You know, really, I appreciate the call. I really do. He’s talking about the brand-new Rush cap, the golf cap, baseball cap at RushLimbaugh.com, the new store that has recently opened with brand-new stock and brand-new procedures, as you heard, brand-new shipping and packing. But let me say, this cap… I’m so glad to get this feedback, because the cap is a big deal to me. I have… Don’t tell people this, but I have a round face and a big head, and caps look small on me.

Nothing looks worse than when it’s too small on you. So I searched and searched for a good golf cap, and we found this thing by New Era. New Era, it’s a sturdy front. It’s large but it’s not outwardly large. Everybody will look great from the front and from the side. It’s got a great sweatband. It’s the cap made for Major League Baseball teams for decades by New Era. Except those caps are sized individually. This one is sizable. That’s the only difference in it.

But it’s the best quality we could find for the price point we wanted. It just makes my day that you got it, that you noticed that. I mean, it’s easy to go out and find cheap little flimsy caps and slap a logo on ’em. But these caps, like everything else in the store is the highest quality we can find for the price point. This has been a lot of fun. Kathryn is leading the design. Well, she’s been doing so much of this, but she’s leading the design effort.

All of that packaging and the gold lettering, the signature on the inside of the box when you open it up and the way it’s packaged, that’s all her. We have a warehouse now where we do the fulfillment of all this stuff. We used to farm all that out, and we’ve taken control over it now. From the moment we get the order until the day you get it, we are the only ones that touch it — meaning, the ones who care. So you can see it, you can get it at the RushLimbaugh.com app or on the web, the website, either way, the new EIB Store.