SF Mayor: More Feces on Streets Than I’ve Ever Seen

RUSH: I’ve held this one since Sunday. I have a story here from NBC Bay Area. “San Francisco Mayor: ‘There’s More Feces … Than I’ve Ever Seen.'” I read this story. I want to read parts of this to you. This is a standard news story. There is no incredulity expressed in the writing. There’s nothing in the story that makes you think that anything about this is the slightest bit strange. “Mayor London Breed discusses her plan to clean up San Francisco in her first one-on-one interview since taking office.” 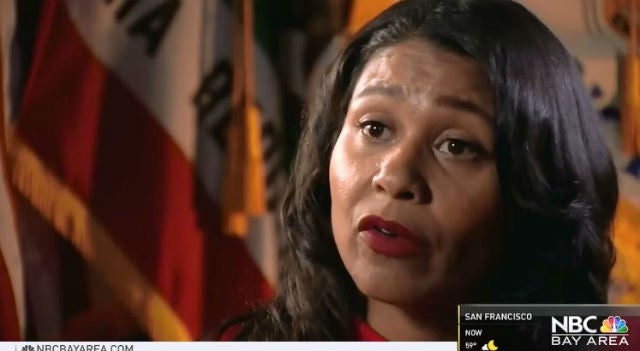 So she’s just been elected. London Breed: “I work hard to make sure your programs are funded for the purposes of trying to get these [people] help, and what I am asking you to do is work with your clients and ask them to at least have respect for the community…” She’s talking about… The “clients” who are the homeless and the drug addicts and the people defecating in the streets, and she’s talking to social services groups and she’s asking them to “work with your clients,” i.e., the homeless. “[W]ork with your clients” and please tell them to “at least clean up after themselves and show respect to one another and people in the neighborhood.”

This is the mayor talking to social services, “You need to have meetings with your clients, and you need to tell them to start cleaning up after themselves and to show respect for one another.” Mayor, don’t you get — these people have lost all self-respect. Anyway, it continues. “When pressed about whether her plan calls for harsher penalties against those who litter or defecate on city streets –” That’s written as though it happens everywhere.

Oh, yeah. People are littering everywhere. And they’re crapping on the streets everywhere. And when pressed about whether her plan calls for harsher penalties for those who do that, the mayor said, “‘I didn’t express anything about a penalty.’ Instead, the mayor said she has encouraged nonprofits “to talk to their clients, who, unfortunately, were mostly responsible for the conditions of our streets.”

The clients? Homeless are now clients of nonprofits. And then she said, “I will say there is more feces on the sidewalks than I’ve ever seen growing up here. That is a huge problem and we are not just talking about from dogs — we’re talking about from humans.” As though it happens everywhere.

The San Francisco street cleaning budget is gonna get a 20% increase. Sixty-five million spent on street cleaning, and they’re gonna add $13 million in additional spending to clean up the feces. And we have audio of the new mayor, London Breed.

This is an NBC Bay Area affiliate. Bigad Shaban, interviewed the mayor. And the journalist says, “You’re a native of San Francisco. Is this the worst you have seen it?”

SHABAN: I will say that there’s more feces on the sidewalks than I’ve ever seen, you know, growing up here, that was something that wasn’t the norm.

SHABAN: Than you’ve ever seen?

RUSH: Right. And so now we’re gonna go talk to the nonprofits and the social service people so that they can get a message to their clients not to do it and to show some respect and to start cleaning up. Has anybody out there ever thought to ask, why did this start? I’m sorry, maybe I’m too civilized. This this boggles that this is not considered outrageously irregular. “It’s worse than I’ve ever seen,” as though it’s, yeah, it’s been a problem for a while. And it has. Folks, there are maps. If you’re gonna go to San Francisco, in the tourist areas, not just the Tenderloin where most of this is going on.

The hotels have asked for there to be maps made so you can avoid the human feces dumps and the used needles and all that. This is supposed to be utopia by the bay. This is San Francisco. This is where conservatives are not desired, not wanted. This is liberalism unchecked, just like Detroit was, Chicago, any number of other places you could mention, but you’re not supposed to.