RUSH: I just saw a great story, a little blurb out at the American Spectator. It’s a semisatirical piece. The premise is: Okay, Donald Trump’s a raving lunatic and an idiot, and all the other people in Washington are the brilliant, smart people. Yet who is the billionaire and who is it that got elected president and who hasn’t?

We all remember President Anderson Cooper and his four-year administration where he accomplished… What? And we remember Vice President Wolf Blitzer and his efforts to do… What? And it’s a good point. Trump is this raving lunatic idiot, and everybody else in Washington? They’re the real smart ones! Yet… This is a point that I’ve been making with greater frequency a lot lately, and that is there isn’t anybody in that town that could do what Donald Trump done.

Donald Trump may in fact be the most achieved, accomplished human being to ever be president. I have also a piece here by my good friend Conrad Black, who lives in Toronto. I’ve known him for many moons. He writes for National Review and for American Greatness. He has a tremendous book out now — it’s been out about six weeks, two months — on the Trump presidency. We interviewed Conrad for… I think he’s the current issue of The Limbaugh Letter.

He has a piece that he has written following the fireworks here at NATO and Helsinki, and the title of Conrad’s column is, “Trump Will Win This Round with the Deep State.” Now, Conrad Black… He always gets embarrassed when I discuss him this way, but he is legitimately brilliant. He is uniquely qualified. He’s a former media baron. He’s a member of the House of Lords, Lord Black of Crossharbour in the United Kingdom.

He has had a very celebrated, achieved life. He was also charged and jailed by the U.S. Department of Justice on what he maintains are bogus charges that are written about in Sidney Powell’s book, License to Lie. The Conrad Black case, like it is Enron cases, is blown up and exposed to be the fraudulent DOJ case that it was. I just want to read you some pull quotes from Conrad Black’s column. Now, again, this is in American Greatness. He normally writes at National Review.

Headline: “Trump Will Win This Round with the Deep State — [T]he Helsinki summit will go down in history as a turning point in this American president’s struggle to disembowel the bipartisan regime of complacency and lassitude he successfully ran against. … The entire political process is almost stalled in this death struggle between the former political establishment and the president. …

“Mueller will keep this charade running to the election, with Sessions and Rosenstein as nodding straight-men, and Trump can’t slice the Gordian Knot yet because of the political repercussions of firing Sessions and his deputy. The voters will have to be the jury. This controversy will settle down, and after the Senate has dealt (affirmatively) with the Supreme Court nominee, all will be quiet until the campaign really heats up after Labor Day.

“Strategically, Trump is correct: Russia is a paper tiger apart from its nuclear weapons, has a GDP smaller than Canada’s, and Putin is conducting a clumsy imitation of Charles de Gaulle’s elegant restoration of France as a serious power by being a nuisance to the Anglo-Americans in order to redeem the fiasco of the French surrender to the Nazis in 1940.”

Now, that is… (chuckles) Comparing Putin to Charles de Gaulle? “The danger with Putin,” writes Conrad… “The danger with Putin is to drive Russia into the arms of China and Iran, and the goodwill of the Kremlin can be had by the United States for less than continuing the present NATO pocket-picking. NATO can be reformed and Russia can be made a semi-cooperative state of convenience. These are reasonable goals and they are attainable.”

Now, he goes into you more detail what’s going on. I say, it’s a pull quote.

But he claims that Trump’s foreign policy strategy with Putin is to make sure that Putin does not eventually associate with China and Iran, to break that up. And that the United States could potentially secure the goodwill of the Kremlin for much less than what it’s costing us to have our pockets picked at NATO. And then he says NATO can be reformed, and Russia can be made a semicooperative state of convenience.

By the way, foreign policy and its thinking is a Conrad Black specialty. For him to say that what Trump appears to be trying here with Putin, he thinks it can be done. Now, what is Trump saying about Putin? He says I think we need to stop looking at Russia as a perennial enemy. Every previous president in the history has mucked this up, and Russia has been one of these gigantic, constant enemies. But we need to change this. And Trump is attempting to change this. Conrad Black says he thinks it’s possible and is supportive of the Trump strategy of doing so.

Now, folks, this is not gonna be understood by the Washington establishment. It’s not understood at all. Now, the Democrat Party has been simpatico with communism and they have been simpatico with the Soviet Union insofar as it was an enemy of American conservatives and Republicans. And so the enemy of your enemy, my enemy is my friend.

But the standard world order in the post-World War II era has held that Russia is a legitimate second superpower, that because of its nuclear weapons stockpiles, acts as a stabilizing force against the United States. Madam Albright, secretary of state for Clinton, secretary of state involved with Obama, has often said that the United States as the lone superpower in the world is a very bad thing. They don’t have any concept of us as the good guys. And so a competing superpower — i.e., Russia — will keep us in check.

And Trump believes that this construction, or this construct of a permanent enemy that dates back to events following World War II needs to be upgraded, needs to be modernized. Look, folks. Let me just cut to the chase. What Trump is really about is throwing the current world order upside down. ‘Cause he thinks it’s bogus, he thinks it’s no longer useful, and all it really is is a jobs program.

The current world order, run by the State Department, all these existing relationships keeps a bunch of bureaucrats employed. Not accomplishing anything. And while this order continues, the United States gets its pocket picked. The United States is made to pay for all the disadvantages found around the world because it’s unfair that we’re so big, and other reasons.

And Trump is simply saying, “These days are over. I ran for president, I got elected, I’m gonna implement my ideas. And one of my ideas is to overthrow this existing order which isn’t doing anybody any good, especially America.”

He says, “Look at the Middle East. There’s been no serious movement toward solving that conflict for 50 years. And yet we have not made a single change. Well, those days are over.” This constant standoff with Russia, slash, Soviet Union, what’s that gotten anybody but a bunch of permanent jobs where they don’t have to do anything in the State Department, the intel community. So Trump’s gonna throw that upside down. And this is what he’s doing. 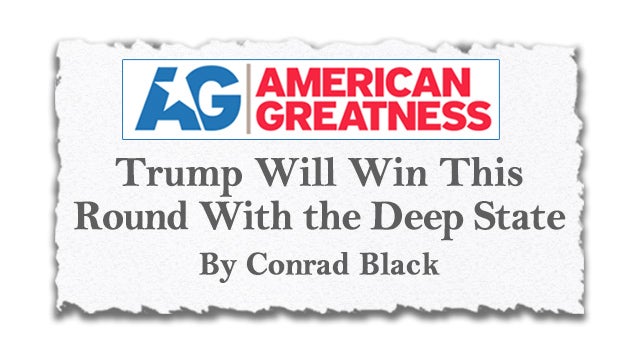 Now, he’s not gonna go out and announce this. Trump has made it plain, he’s not gonna announce his strategy in advance, be it military, be it political, be it socioeconomic. He keeps his ideas, his cards close to the vest. So these people in Washington, “This guy’s a blithering idiot. This guy’s dumb. He’s dangerous. He’s a traitor.” Well, yeah, because he’s basically overthrowing their world, turning it upside down.

You would be amazed folks — maybe you wouldn’t. But this is an important point. You’d be amazed at the number of people who earn a very good living and don’t do jack, anything, in Washington. They get their government salary, whatever perks they can get. They don’t do anything. It’s a gravy train like you can’t believe. Trump can’t relate to it. You eat if you work. You only achieve greatness if you work at it. You only accomplish things if you actually work.

Well, we got a bunch of people, and I mean a lot of people in all these bureaucracies who don’t really have to get up and do any work because nothing’s ever done! And they want to hold on to it and they want to keep it that way. And there isn’t a single bureaucracy immune to this, from our precious intelligence agencies, to our educational establishment, to the environmental establishment, to the education and food and drug administration, it’s all the same.

It’s amazing how many people earn so much for having to accomplish so little. And while all of this nothing has been going on, the United States has been paying the price. We have not had our interests in the world advanced. We’ve not had anybody standing up for our interests, particularly the last eight years with Barack Obama.

So if you look at it that way, that Donald Trump is literally taking the world order established by the U.S. and the U.K. and the Soviet Union following World War II and blowing it up, turning it upside down, overboard, and then rebuilding it, you can understand this abject panic. And the news media considers themselves to be part of this order. Their job is to maintain this order and to make sure that nothing tumultuous happens to it, like Donald Trump.