What Californians Should Do to Conserve Energy

“It’s the answer! It’s clean; it doesn’t pollute.” Now we find with a heat wave they don’t even have enough fossil fuel-generated electricity to handle it without a bunch of brownouts and asking people to turn off their electricity. You know what’s gonna happen if you do that? You could die! “California Power Grid Urges Consumers to Conserve Energy in Heat Wave — California’s power grid operator on Monday issued an alert to homes and businesses to conserve electricity on Tuesday and Wednesday when a heat wave is expected to blanket the state.

“The California Independent System Operator (ISO), the grid operator, said it issued the so-called ‘Flex Alert’ due to high temperatures across the western United States, reduced electricity imports into the state…” What? Electricity imports? Oh, yeah. California has to buy electricity from others. In some cases, they may even be buying coal from the ChiComs. Do you know in Connecticut they buy coal from the ChiComs?

I have been out on Long Island Sound and I’ve seen these gigantic barges and tankers going by. I said, “What the hell is that?” They said, “That’s coal from the ChiComs.” “What’s it for?” “To run the power plant.” “Wait a minute,” I said. “What about all the wind and solar and all of that stuff that’s supposed to save the day?” “Nah. It doesn’t even make a dent. It just doesn’t” “Really?” Yeah. They said it doesn’t. 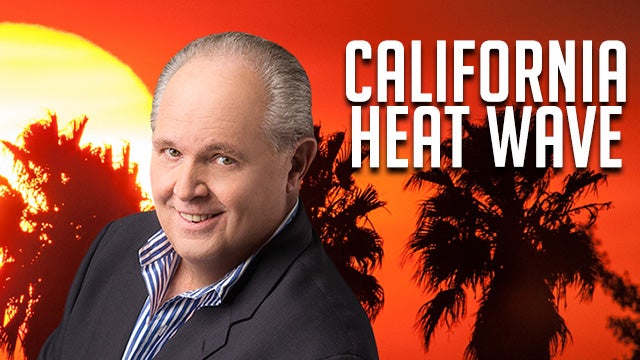 “The [Independent System Operator]’s alert followed an earlier notice by Southern California Gas Co (SoCalGas), the gas utility for the southern part of the state. SoCalGas issued a gas curtailment watch on Monday, notifying customers to be prepared to reduce gas use if needed, with power generators expected to burn more fuel this week than usual to keep air conditioners humming. SoCalGas, a unit of California energy company Sempra Energy, said the watch would remain in effect until further notice.”

It is only a two-day heatwave but “the watch [will] remain in effect until further notice.” You know, I really think if California would just turn off all of the liberal programming they consume, things would be better in that state. If they just turn off MSNBC, turn off CNN… Turn off the late-night comics. Ban the New York Times from being published in this state. Push away from the computer. Skip all the fake news sites. Get off social media. Don’t listen to insane rantings on podcasts.

Just go cold turkey on liberal programming and who knows how much electricity will be saved. What do we do with people with electric cars? Oh, my God! What about people who only have Teslas to get around and they’re being told…? Oh. What are they gonna do? Should people with gasoline powered cars chip in and offer rides to people whose cars are powered by batteries who now can’t be because they’ve gotta turn off the electricity in their homes? What are they gonna do?