Trump said, “I’m willing to negotiate.” And he delivered the spiel on how important it is and how he’s not quitting at giving it up. By the way, the Italian Prime Minister Conte one of the reasons he’s here is also a strong borders advocate. Italy’s had its own problems with being a pass-through nation for illegal immigration from the Middle East. They stop there and someplace on the way to Greece all the way up to Europe. Let’s now join the presser, the Italian prime minister now answering a question.

CONTE: — on NATO. We had a very fruitful exchange of views and opinions and positions. I think that all the positions and standards which are expressed with clarity — 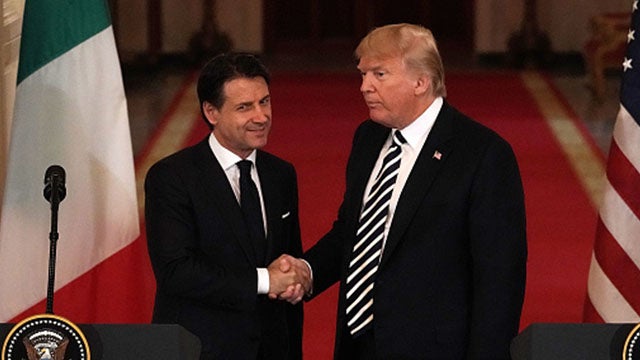 RUSH: By the way, folks, if this gets boring, don’t worry, we’ll cut out of it. Give it a few minutes here to live up to expectations.

CONTE: We had a fruitful exchange both at the G7 summit and the NATO summit in different frameworks. We, for instance, in the framework of G7 summit, we agreed on the need for reforming the WTO, the system —

CONTE: — can understand and applying those same rules after years, the privileges granted to an emerging country clearly means having a system which is not well functioning and not well rational. And NATO (unintelligible).

RUSH: These guys are making my timing look bad here. We gotta move this on.

CONTE: He expressed a system and the need to rebalance the —

RUSH: There we go.

CONTE: — which is born (unintelligible) states which is very disproportionate. These are absolutely reasonable positions.

RUSH: He loves Trump, Trump is reasonable, he supports and agrees with Trump.

CONTE: And will be personally the carrier of the message and trying to make others understand these positions as well. We must negotiate the United States to find the balance in interest of Italian citizens, American citizens, and European citizens.

THE PRESIDENT: But I do want to thank you for what you just said because it’s been very unfair to the United States. We had a very good G7 meeting. That’s where Giuseppe and I became friends. I think we were probably more closely aligned than anybody else in the room. But it was a great meeting in every respect. I would say it was very good, and NATO in particular, I went to NATO, and NATO was essentially going out of business ’cause people weren’t paying and it was going down, down, down. You just have to look at the line. I came along last year and, in a fairly nice tone, I said, “You gotta pay.”

THE PRESIDENT: And they paid 44 billion dollars more. And this year I said it in a bit of a stronger tone, and they’re paying hundreds of billions of dollars more over the years. And NATO will be strong again. And if you speak to Secretary General Stoltenberg, I think he’s the biggest fan of Trump, because he said we couldn’t collect money until President Trump came along. 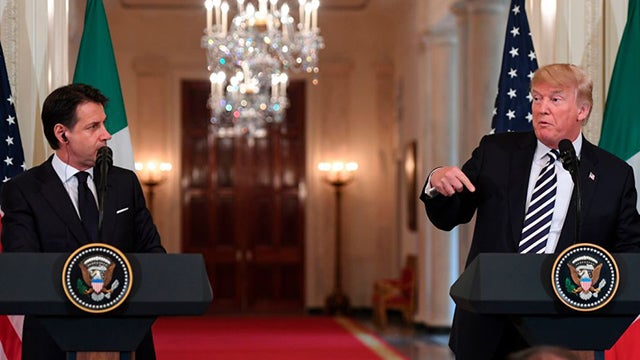 THE PRESIDENT: And he said last year we collected 44 billion dollars and this year money is pouring in.

THE PRESIDENT: It’s like the prime minister said, we really, talk about imbalance. We were treated unfairly, the United States was treated very, very unfairly because we’re shouldering anywhere from 70 to 90% of the cost of NATO. That’s not fair. That’s not fair. Especially when you take Germany and Germany’s paying 1%, a little more than 1%.

RUSH: And making gas deals with Merkel on the side. That’s not gonna fly.

THE PRESIDENT: Paying tremendous amounts of money to Russia. So we’re supposed to protect countries from Russia, but they are paying Russia billions and billions of dollars for the energy.

RUSH: I just said that. That’s exactly right. Another question.

THE PRESIDENT: Not a good situation and I let it be known. So the bottom line is the NATO countries are paying a lot more money and NATO’s become a lot stronger because of it, and I appreciate your answer. Thank you. Please.

CONTE: Sorry, Donald. May I add something? I’m saying as a person who has huge experience as a —

RUSH: Jeez, we need to get a question here. Come on!

CONTE: You have a president who is strong —

CONTE: — supporter and advocate of the interests of the American people —

RUSH: Looking like a bad decision to join this thing, that’s what I —

CONTE: And I’m told there is (unintelligible) who wants to ask a question.

THE PRESIDENT: Well, I can answer. The biggest thing Italy needs is great leadership and they have it right now. I really honestly believe the prime minister is —

RUSH: Took the guy’s question and is answering it.

THE PRESIDENT: In addition to borders, you know, for economic development, you need borders also. But you have a man that’s going to do a terrific job. I have no doubt about it —

THE PRESIDENT: He knows how to sell. He knows how to promote really a great product because they make among the greatest products. I won’t mention names but they are great. I have some of them.

THE PRESIDENT: And Italy makes great product and I think it’s gonna do very well economically. And we’re there to help. We have had record numbers —

THE PRESIDENT: — a little more than a year and a half, and we’ve had record numbers. We’ve had numbers that nobody believed possible, especially if you look at one particular fact that was not reported very much, trade deficit, $52 billion reduction in the trade deficit for the quarter and I think probably Steve Mnuchin, Treasury is here, and Mike Pompeo, I think nobody would have thought that would be possible so quickly.

RUSH: They better say that (unintelligible) right there.

THE PRESIDENT: Trace deficit for the quarter. I think that Italy is gonna be able to do the same thing, slightly different numbers but the same thing.

RUSH: This question was for the Italian prime minister just so you know.

REPORTER: What role do you think the European Union should play in the readmission of —

THE PRESIDENT: That’s up to them. I don’t want to get involved in that. Look, the European Union, Jean-Claude and I had a fantastic meeting last week. We were having a hard time and I did mention tariffs on cars, and we got along very well. Very well. I think they’re gonna — 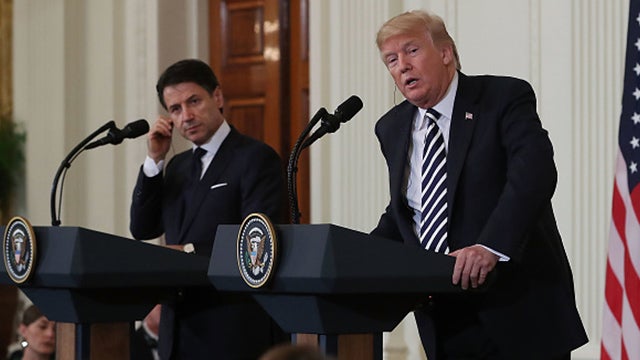 THE PRESIDENT: And we’re gonna treat them fairly. But as you know it’s been a one-way street. The European Union has totally take advantage of the United States. We can’t let that happen. Not fair to the United States.

THE PRESIDENT: And, by the way, Italy has a $31 billion surplus with the United States, meaning we have a $31 billion trade deficit with Italy, and we discussed that —

RUSH: Make it up in pasta.

THE PRESIDENT: We’re gonna work something out. Okay? Thank you.

RUSH: Okay. That’s it, folks. We’ve gotta take a break here because, you know, we course are loyal to our obscene profit breaks, one of which is coming up in mere seconds. But the first question happened, I mistimed it, we were in our first profit break and there was a sniveling question about Trump and the government shutdown and the answer didn’t provide any fireworks or anything, we didn’t really miss it.

RUSH: By the way, I erred. I made a mistake. Trump did answer a question that was asked of him. The female reporter that asked the question, the captioning couldn’t keep up with her, and I thought that she first asked her question of the Prime Minister Conte and then asked for President Trump to answer the question and Trump then took off and answered it. But I’m told that her question was for Trump. So that’s one of those occasions where I just wasn’t able to hear well enough — and the captioning didn’t keep up with it — so I had to guess. And using context, I figured Trump just couldn’t wait to answer the question and did. It was a good answer either way.