The Midterms and Shutdown Strategy

RUSH: So, look at this headline from the Daily Beast. It’s a left-wing publication. Headline: “Trump: Sean Hannity, Rush Limbaugh Want Government Shutdown Before Midterms … During yet another long, rambling rally in Wilkes-Barre, Pennsylvania that was ostensibly meant to bolster Republican Lou Barletta’s attempt to unseat two-term Democratic Senator Bob Casey, President Donald Trump again brought up the idea of shutting down the government over the issue of ‘border security.’ And he made it clear which advisers he was listening to as he publicly flirts with that idea.”

THE PRESIDENT: We need more Republicans, but there are friends of mine. They say, President, you know…” And some are really tough guys, and they said, “Sir, we’re better off if we wait until after.” I say, “It’s better before! Let’s do it before. We’re better off.” You know who thinks it should be before? Rush Limbaugh thinks it should be before, before the election. 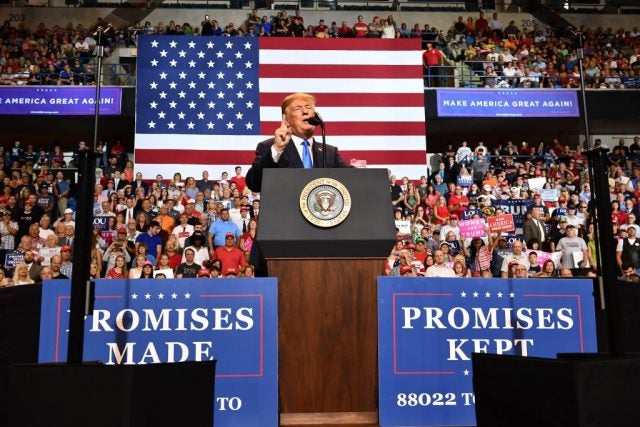 RUSH: So I’m getting notes last night. “The president just mentioned you in the rally,” but nobody said how. I forgot to turn it on. I didn’t have it on. My attention was elsewhere last night. So I didn’t know until I got the sound-bite roster today. I saw the story in The Daily Beast. So the president says that both me and Sean Hannity wanted to do the shutdown beforehand. Now, you know my thinking on this. I’m tired.

But the reason I think beforehand is because the issue that we’re talking about here is the wall, funding for the wall. It was No. 1 issue for Trump all during the primaries, and it’s the basis on which he won the Republican nomination, and it is the basis on which he won the presidency. Now, there are a lot of reasons Trump won. There are many reasons why a lot of people, a diverse group of people voted for Donald Trump.

But I’m here to tell you that the issue that keeps Trump’s people attached to him is illegal immigration and dealing with it, because people… See, this is not hard to understand; this isn’t complex. People know what is going to happen to our country by way of what’s going to happen to our culture if it is overrun with people who will not learn to speak our language and who will not desire to assimilate and become part of this distinct American culture.

See, one of the problems is that you and I believe in American exceptionalism, and we believe in the uniqueness in America because of the uniqueness of our structure and constitution which limits government. We have a country where the freedom of the people is the paramount issue. The primary organizing reason for this country is individual liberty and freedom — life, liberty, pursuit of happiness.

Those three things, unabridged by government action, have created the greatest country in the history of the world. It’s not because the people who live here are any better than people anywhere else. It’s not just because we’re born here we have better DNA, we’re smarter or brighter; it’s because we have fewer limits and shackles on our movements, on our creativity, on our ability to learn, our ability to follow our dreams and our passions.

We have an entire country where for over 200 years people have been able to do that, and we’ve had the greatness of humanity unleashed like nowhere else on the face of the earth. And that’s why the United States is the United States. And that’s why it’s the world’s lone superpower, both militarily and economically. This has resulted in a distinct American culture. The Constitution, the Declaration, our founding documents gave this country a distinct culture of which we’re all proud and wish to maintain because of its greatness, because of its guarantee of freedom and liberty and pursuit of happiness.

The United States has been around less than 300 years. Countries in Europe and elsewhere and Asia have been around thousands. We, in less than one-third the time they’ve been around, run rings around them in every which way you can imagine, to the point now the world depends on our economy. People around the world who want to be free, who yearn to be free, depend upon the U.S. and they look to us for it.

But as everybody well knows, there’s a rising percentage of our population that doesn’t see America this way at all. It sees America as the home of oppression and racism and bigotry and mean-spiritedness and unfairness and income inequality. And those people are consumed with raw hatred and they are doing anything they can to destroy this distinct American culture, to wipe it out, to dilute it, and to recreate in its place some socialist utopia that does not, never has, and cannot exist.

So this uprising of the malcontent and the offended and the unhappy and the miserable is seeking to spread their misery and their unhappiness as far and wide throughout our culture as they can. That’s why they’re blaming the people who founded this country and who built this country as the problem in this country. Well, one of the fastest ways to dilute a culture — one of the fastest ways to dilute the greatness and the uniqueness — is to simply allow anybody in the world into this country to do whatever they wish under the premise that they deserve to be here because they’re only poor because we made them poor.

Everything now has become our fault. Every problem in the world is our fault, and because of that we owe the world to make sure our back pocket remains wide open for anybody who wants to dip their hand into it. Millions and millions and millions of Americans recognize exactly what open borders and amnesty and uncontrolled illegal immigration means — and they’re hell-bent on stopping it.

There’s only been one political candidate in many people’s lifetimes that has given anybody any hope whatsoever that he agrees with them on this and will do something to stop it, and that’s Donald Trump. And they are not going to abandon Donald Trump. If Donald Trump engineers a government shutdown, they will support the government shutdown. As long as it leads to putting an end to the open, porous border. As long as it puts an end to people not legally coming to this country.

We love immigration. We love legal immigration. We love the merit-based system. We want greatness in America. We want people to want to be great. America makes people great. America is the place where the great have the greatest opportunity to realize their dreams. And that’s the kind of people we want and that we’ve always wanted in. But this thing has become a debate where you’re told, many people are told that we want to shut it all down.

We don’t want anybody in here, particularly if they’re not like us. Nothing could be further from the truth, and the people that voted for Donald Trump know it. He’s got to get funding for the wall. He’s got to get support for securing the border, whether it’s a wall or whether it’s policy, expanded ICE, what have you. If a government shutdown is the only way to do that, then when do you do it? 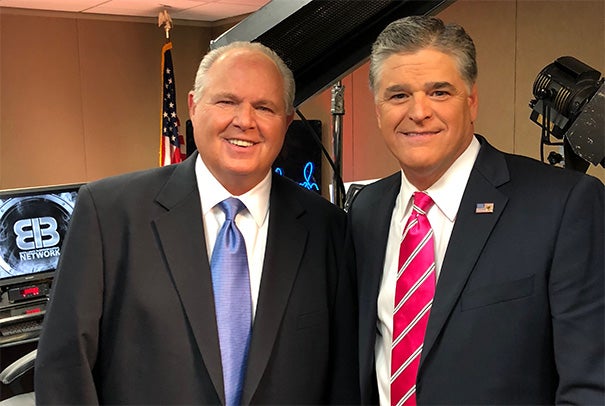 Now, you put all this together with the conventional wisdom belief that the Democrats have already won the House. “Oh, yes! There’s a massive blue wave coming, and there’s nothing that the Republicans can do to stop it.” Right? Well, let’s go back to this story here in The Daily Beast. Headline: “Sean Hannity and Rush Limbaugh Want Government Shutdown Before Midterms.” These people are outraged.

Wouldn’t they be better served to encourage, “Hey, these guys…” In fact, it would make sense to write a story: “We think there’s a blue wave coming, but Limbaugh and Hannity have it figured out — and if they can convince Trump to do this, we’re all be in trouble.” Don’t you think? Maybe they’re not capable of that kind of psychological trickery, because they’re so prone to knee-jerk reactions whenever they hear anybody they hate say something that frightens them.

But at any rate it’s an interesting question. If you wait to shut down government — or make your big move on border security after the wall — until after the midterms, and if you don’t win, what leverage do you have to do it? So the question comes down: Would talking about shutting down government as leverage to get the money to build the wall and to secure the border, hurt Republican efforts to maintain control of the House or would it help?

Because whatever the polling says, one thing has to happen if the Republicans are going to hold the House: There has to be massive turnout of those who voted for Trump in 2016. How do you do that? Trump’s not on the ballot. How do you get people that couldn’t wait to vote for Trump to vote for House races and people they may not even know? And that answer’s easy.

You do what we did in ’94. You nationalize the House races, and you run campaigns in all of these districts talking about how important Congressman X will be to the Trump agenda. Not how important Congressman X will be to getting the next old folks building built down by the hardware store. You nationalize everything. Every House race is nationalized. Its importance to the national agenda to whatever it is, immigration, tax cuts, finally getting rid of Obamacare.

Nationalizing these elections like happened in ’94 is how you do it. It’s the best chance you have of getting the turnout, because that’s what it’s going to take. We have to accept that the Democrats are fired up. We have to behave on that basis. Even if they’re not, even if this is a lie, we have to believe that they are. When you’re playing golf and you’re in a tournament, you have to think your opponent is going to sink every putt.