RUSH: Charlie Kirk runs Turning Point USA. It’s a young people’s new conservative organization. It’s designed to spread conservatism on college campi. One of his coleaders is Candace Owens, who is a young African-American woman who is as conservative as any of us are. She also happens to be fearless — and the left hates her, and they hate Charlie, and they hate Turning Point USA. They’re critics. They call out the left. So Charlie and Candace are in Philadelphia the other day. 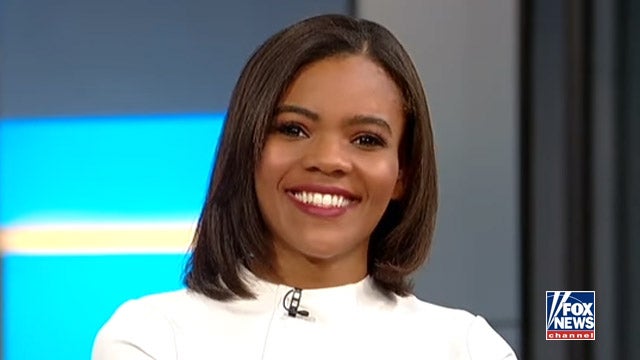 They’re having breakfast, and they’re set upon by a bunch of Antifa people wearing masks looking like a bunch of bank robbers. They come up and they get in their face and they bully them. These are not protesters. The media calls ’em, “Charlie Kirk and Candace Owens confronted by protesters.” They’re confronted by a freaking mob! This is nothing more than a mob! They were doing nothing but having breakfast.

Charlie tweeted: “My favorite part of the last 24 hours has been seeing white liberals,” which is who the Antifa people are, “tell a black conservative, Candace Owens, that she is a white supremacist because she was praising a black police force against white liberals trashing a city that is 44% black.”

In other words, the police force protecting them is African-American and Hispanic. Here comes this bunch of privileged white liberals calling Candace Owens a white supremacist. So how is it that a black conservative female can be a white supremacist? 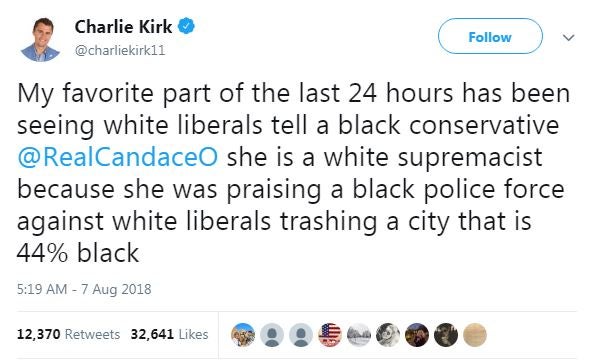 This is what they believe. This is what they’ve been taught. The sum total of their education is America sucks, and it sucks because it was built by and for rich white people, and everything that’s happened has been only to benefit rich white people, and the country was built on the backs of a bunch of minorities that didn’t get anything for it. And they’ve just been taught this hatred, and it’s been building and building and building and that’s what they believe. The root of all evil in America is white, primarily male, majority, and then you add Christian to it and you pretty much have the picture.

As I said yesterday, I first heard this whole theory espoused by the Reverend Jackson when he was running for president in 1984. And it was said that he couldn’t be racist, he’s a minority, doesn’t have any power to abuse or mistreat anybody. So no African-American in America ever be guilty of racism.

But this also has roots in Marxism. ‘Cause what this really is is a strain of communism. They would tell you it’s postmodernism, postracial, postpartisan, postmodernism is what they claim, and that it’s rooted in the Marxist struggle of rich versus poor. And of course the rich are the evil white majority, and the poor are everybody else who used to have all the money but the rich white people took it. I never understood the math on this, how you can rob from the poor and get rich, but this is what they say.

Anyway, rich versus poor has now become oppressor versus oppressed. And all of the minorities, despite whatever progress has been made — there isn’t any — they are the oppressed. And the white majority, primarily white men, Christian, are the oppressors. And that’s how they view America. And they view it as having been founded that way. And, as such, if Candace Owens wants to join with a bunch of white guys and run around talking about conservative values, she is a white supremacist. And that’s how it works.

I know it’s confusing and perverted, and of course they get praised by the media for having compassion and caring, the desire to change things for the better. And so the violence they engage in, the bullying they engage in is essentially excused and in some cases even lauded.