RUSH: Oh, man, do we have… I have been forced to lift the ban on audio sound bites from MSNBC: Something that was said on Friday night, and it’s basically that Donald Trump… A New York Times reporterette, Michelle Goldberg, on MSNBC actually said that Donald Trump wants to round people up and murder them. And there was no pushback on that from conservatives on the panel. Now, folks, I’m gonna tell you: 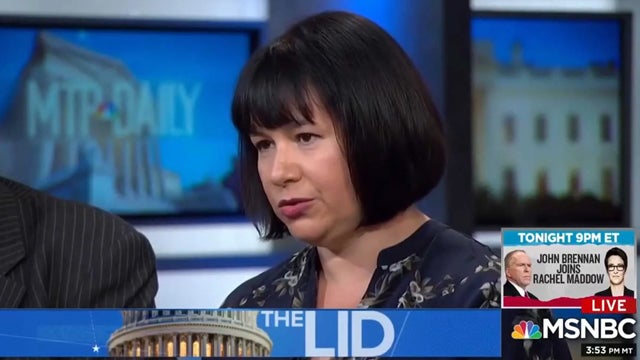 If I had ever said something like that about Barack Obama, that might have been the end of this program. It might have been, if people thought that I meant it, and if I had said something like that. But here is a New York Times infobabe all over MSNBC saying it and it’s simply “Rush, come on. She’s just trying to fire up the base.” You think so? Of course they’re trying to fire up the base. You don’t think she really believes it? Why would she be saying this stuff? But for there to be no pushback against that, that Trump wants to round people up and murder them.

RUSH: Okay. Let me set the table here. This is Friday night, MSNBC. The name of the program, Meet the Press Daily. And they’re talking about Trump’s criticism of Mueller. Katy Tur, T-u-r, is the Fill-In Host. We have Michelle Goldberg, who’s a columnist for the New York Times. Real Clear Politics national political reporter Caitlin Huey-Burns, and Commentary magazine editor John Podhoretz. And it begins with Caitlin Huey-Burns, national political reporter of the Real Clear Politics website.

HUEY-BURNS: This is the most vocal president, at least in real time, that we’ve had in recent memory, right? He is the leader of the free world.

GOLDBERG: Oh, no, he’s not. Not the leader of the free world. But sorry. (laughing)

PODHORETZ: By default he’s the leader of the free world.

GOLDBERG: Angela Merkel is the leader of the free world. But —

HUEY-BURNS: This is the most vocal president, at least in real time, that we’ve had in recent memory, right? He is the leader of the free world.

GOLDBERG: Oh, no, he’s not. Not the leader of the free world. But sorry. (laughing)

PODHORETZ: By default he’s the leader of the free world.

GOLDBERG: Angela Merkel is the leader of the free world. But —

HUEY-BURNS: Well, he is the most important person in the world in politics right now, and he is very vocal, and I do agree with you that this does express a level of exasperation among his aides that they can’t have any control over —

TUR: Your argument that he’s not leader of the free world because he’s not standing up for democracy — (crosstalk)

GOLDBERG: He’s a sort of junior player in a bloc of authoritarian countries.

These people are just genuinely insane. So it picks up again here with Katy Tur then saying, “So you’re saying” — and it’s Michelle Goldberg that will reply here — “you’re saying that people like the European Union are no longer looking at Trump as a leader and they’re thinking of doing their own thing?”

GOLDBERG: Right, they see instead he’s like, right, he’s part of a bloc that includes Vladimir Putin, Duterte. He’s, you know, he’s part of kind of an axis of power… (crosstalk)

PODHORETZ: If he’s not the leader of the free world —

TUR: He’s not rounding people up and murdering them…

TUR: — without any, you know, due process.

TUR: I don’t think you can say that definitively, Michelle…

GOLDBERG: Okay, but it’s the sort of country where, say, like Saudi Arabia can intimidate Canada for sending out a tweet about its human rights record.

RUSH: I’m sorry. I can’t keep up. This is what the poison of hatred does to people. It makes them incoherent. It embarrasses them except they don’t know it. And it was Katy Tur who said, “Well, wait, he’s not, like, rounding people up and murdering them.” And Podesta weakly said, “Yeah.” And Tur said, “Yeah, without any, you know, due process.” And Goldberg said, “Well, he’d certainly like to. He’d certainly like to.”

So, an opinion writer for the New York Times plainly says on TV that the president of the United States would like to round people up and murder them, like Putin does and like Duterte. For those of you in Rio Linda, this is this the madman over in the Philippines.

Honestly, folks, you don’t know what to do with this other than try to laugh at it. You wonder, you’ve got a so-called conservative on this panel who does not react or object in much of any way to any of this other than to defend the fact that any president is the leader of the free world.

So I had to lift the ban. You know, we have a ban on MSNBC because we contributed to their ratings, and I said I can’t have that. We kept playing sound bites of some of their Looney Toon O’Tune hosts years ago. I said I cannot be responsible for that network’s rating increase; so we yanked, banned them and so forth. Occasionally, we lift it.