Truth Isn’t Truth Where the Media Is Concerned

CALLER: I’m happy to talk to you. I’m sorry. I was waiting awhile; so I’m very nervous. How are you doing? 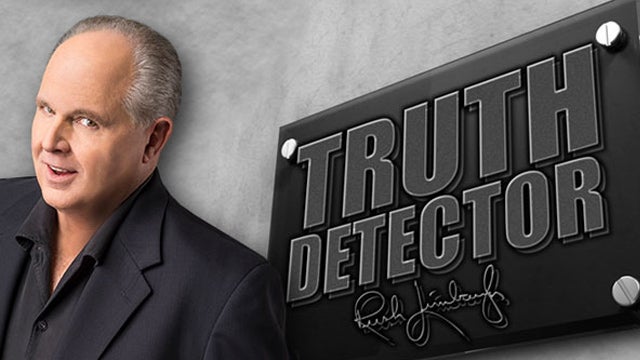 CALLER: Okay. What I was calling in to say, and it’s, you know, the more I listen to you, the more frustrated I get because you are literally one of the only voices that I hear that is, you know, you’re just on target, you’re on point, and you say everything so incredibly well, and then I listen to the Sunday news shows, and you get somebody like Giuliani out there just stepping in it and giving them, you know, a sound bite with his “truth is not truth” comment.

RUSH: Wait a minute. I appreciate that you are aware of how well I cut to the chase. I mean, I get in, get it, and get out. I make the complex understandable. And I really appreciate you observing that. But what did Rudy do that you think stepped in it?

CALLER: I mean, I just think he made some comment that — and I understood what he was saying, and he explained what he was saying is truth is not truth or something to that effect. I forget the exact line. But he was basically trying to point out that the supposed truth that we hear from one side is really not the truth.

RUSH: Well, let cut to the chase on this because you are again very shrewd here to have picked up on this. Rudy made this comment, truth is not truth, when he was being interviewed by F. Chuck Todd on Meet the Press. So essentially Rudy Giuliani was in the middle of a trap. Any time somebody from a Trump Organization goes on NBC, ABC, CBS, CNN, it’s a trap, and they’d better know it.

Chuck Todd was trying to goad his viewers into believing that the only reason Trump doesn’t talk to Mueller is ’cause he’s got something to hide. So F. Chuck Todd lays the trap and says, “Rudy, Mr. Mayor, if you just go in and tell the truth, you’ve got nothing to worry about.” Tell that to Martha Stewart. A perjury trap is very simple. Trump could go in and tell the truth about something. And then Mueller could go get another witness and ask that witness about the same story, and that witness could tell a different story. Without even verifying which is accurate, Trump could be charged with lying in that scenario, folks.

So Rudy was exactly right when he said truth isn’t truth. If you doubt me, what is the ultimate truth, and who gets to decide what it is, folks? You know as well as I do that truth is a floating concept simply because of what we human beings are able to do with it. You may know the truth of a matter inside out, and you may tell people what the truth is, but you also ought to that know there might be people in your circumstance or situation who will lie and tell a different version of your truth and thereby try to create the impression that you, who possess the truth, are lying about it.

But it isn’t. And it seldom is. If you ever end up in court, if you’re ever a defendant in court, do not make the mistake of thinking truth is what matters there. Because it isn’t. The courtroom is a stage. The courtroom is a show. And a lot of things besides the truth matter, like images and like how to influence the jury and how to tap into their emotional being and thoughts on the matter at hand as opposed to their actual intellectualizing or thinking about it.

But, see, apparently they didn’t make the case on John Gotti or John Gotti was able to buy a juror. If John Gotti bought a juror, what does that do to truth? That juror swore up and down Gotti didn’t do it, and on the Bible, “I swear, Judge, your Honor, everything I’m saying, the whole truth, nothing but the truth; so help me dollar sign.” So Rudy didn’t make a mistake in saying truth isn’t truth, but it gave F. Chuck Todd and the rest of the Drive-Bys an opening and an opportunity to basically recast what Rudy was saying and lie about it and say Rudy just admitted that the Trump team doesn’t believe in truth, that the Trump team knows that truth won’t carry the day for them, that they have to lie or what have you.

Rudy was exactly right. He’s talking as lawyers talk. There’s truth and then there’s truth. How many of you have had the truth on your side for whatever the issue is, I don’t care, something at work, something at home, you’re a student, you didn’t get your homework done, you’ve told the truth. How many people believe you? Your parents. When you tell ’em the dog ate it. Or even when you come up with the truth. And, by the way, how often does truth exonerate you?

“‘Cause, you know what, Dad? I didn’t give a rat’s rear end. I wanted to go out and party with my buddies.” 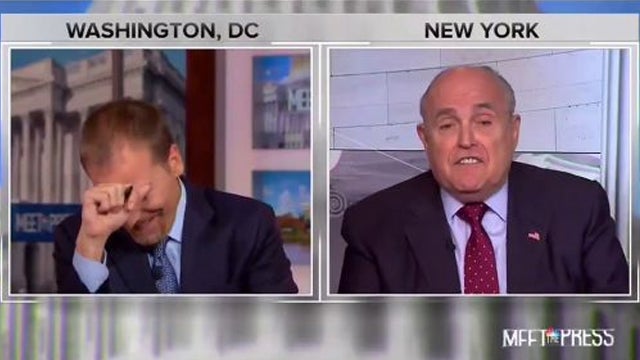 “Oh. Well, Son, you know what? We’re gonna give you a new car for being honest.” How often does that happen? Anyway, I don’t think there’s anything to gain by going on TV with F. Chuck Todd and the rest of these clowns that are doing nothing but setting traps. But these guys all think they can overcome the trap. I understand the mind-set. They think that they can beat back the F. Chuck Todds of the world and stymie them.

And, by the way, Rudy is doing a great job. Do you know what Rudy’s job is? What’s Rudy’s job, right now? Rudy is Trump’s lawyer. And people are saying, “That’s strange. Rudy’s not acting like a lawyer.” How do lawyers act? (laughing) You ought to go to court when the personal injury bar gets in gear. How do lawyers act? Stately, button-down, French cuffs, law books in the background speaking of the brilliance of former chief justices, Constitution, how do lawyers behave? That’s number one.

Number two, Rudy has one job right now, and it’s to drive Robert Mueller’s opinion poll numbers down. Because this thing isn’t about the law. This thing right now is pure politics. And Rudy is succeeding dramatically in making people suspicious of the honor and integrity and purpose of Robert Mueller in advance of the upcoming blistering report.

Rudy’s job is to have as many people as possible question the honesty and the integrity of the forthcoming upcoming blistering report by questioning the honesty and integrity of Mueller and his investigation. Rudy is on a political attack mission and he uses his resume to enhance the effort. He is a lawyer. He’s a former mayor. Well, those things carry certain weight with people. They just do. And Rudy’s doing a good job in that regard. Anyway, I appreciate your comments, Marianne, very much.

RUSH: Let me give you another somewhat, as I look back on it, cute example. When this program was new and it was growing leaps and bounds and it was captivating everybody’s minds, I mean, it still does, but I mean when it was new we were adding stations every day. The growth of the program was — we were launching. I mean, it was like a rocket ship. And of course I immediately became a target and an enemy of the left of the Democrat Party.

So my mother called me one day and told me, “Those people at the National Enquirer were so nice.

“Yeah, they called here, and they wanted to come by and talk to me about you and your childhood and so forth. I told them some stories about you and some of your friends at the training school in kindergarten –”

“Oh, yeah. They were so nice. Look, son. We Limbaughs have nothing to hide.”

“Yes, we do, Mother. Some of this stuff is none of their business, and it’s not yours to tell ’em this.” 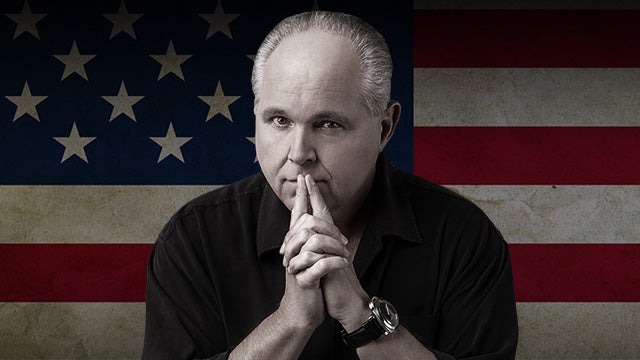 “You’re wrong. We’ve got nothing to hide. You should be happy they want to know about you.”

So I had to go through, “What did you tell ’em?” And I’m sitting there, what am I gonna do? It’s my mother. I was ready to blow my stack, but I can’t blow my stack. But she believed that. She was just so honored that people she didn’t know wanted to know about her son, and she was so proud, she couldn’t wait to tell ’em. And things that she thought were cute little childhood stories, The Enquirer turns into I was a racist in the making. Not to mention the time she invited a journalist on EIB 1 and didn’t tell me until I got to the plane.

“They’re so nice, you really should talk to these people.” Truth isn’t truth, folks. It depends on who’s hearing it and what they want to do with it.

Anyway, Mark in Bellaire, Michigan. You’re next. It’s great to have you on the EIB — she even showed ’em my draft card. That’s right. I forgot. She showed them my draft record to prove that I had — there was a story I dodged the draft. And she wanted to prove that — they walked out of the house with copies of the draft record.