Callers Weigh in on Gender Madness

RUSH: This is Rhonda, South Bend, Indiana. Glad you waited. Welcome to the program. Hi.

CALLER: Hi, Rush. I am just one small caffeinated American mom. I do not have a college degree. But what I do have is four boys from 28 down to 12. I have had the same husband for 31 years. And I’m a girl. So I have a pretty good grasp on gender identities. And I’ve been thinking a lot about this gender confusion, as you were talking about earlier in the program. 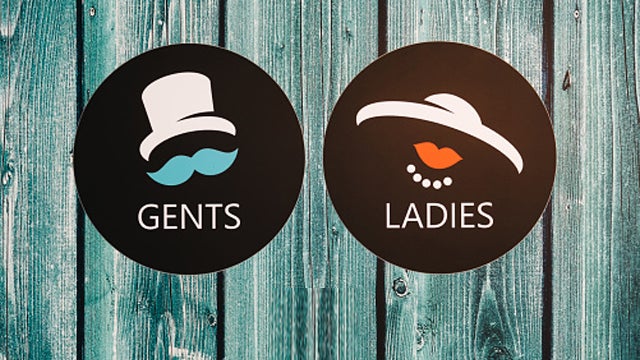 CALLER: In my mind, it has part of its roots in the radical feminist movement. They started telling us that we were second class, second rate, held back, not achieving our full potential if we weren’t in the office, career women, if we were having babies and we were home and pregnant in the kitchen, we need to be more like men, because we were missing out.

RUSH: Right. You were selling out the sisterhood.

CALLER: Yes. Well, you know what, I guess I was raised in the school of common sense, Rush. The other thing, then, the second prong on that fork is what they are now calling toxic masculinity. And the way they use it I take umbrage at, because when the progressives are telling me that my sons and my husband, their innate masculine characteristics are toxic, I will go to the mat on that. Is it any wonder that this generation is confused about whether they’re boys or girls?

RUSH: Well, this generation — they are confused, but there’s something worse. They’re angry.

It is an anger that is deeply embedded in misery and unhappiness and I think self-loathing for a host of reasons I could name, but it wouldn’t be productive to do that. But it is rage and anger that is driving all of this. I’m glad you called. Thank you much.

RUSH: Next up is Steve in Jersey City. Great to have you. Hi.

CALLER: Hey, Rush. I was calling in reaction to the gender assignment debate, and my theory is that the reason they’re so upset that they are assigned a gender is that, if given the choice, everyone would choose to be male.

RUSH: Really? That’s your experience? You really think that’s what’s driving this, that most of these people having the sexual identity crisis wish they were men?

CALLER: I think that there’s a lot of truth to that. I mean, if you look at the feminist movement, it’s to make women more manly and to make men less manly, as to counterbalance —

RUSH: You mean the early days the feminist movement, telling women they have to be more like men, they gotta join the private clubs, they gotta become CEOs, gotta do all this. And the same time they’re turning the CEOs and other successful men that are their husbands into predators and child abusers and toxic masculinity exhibitors? 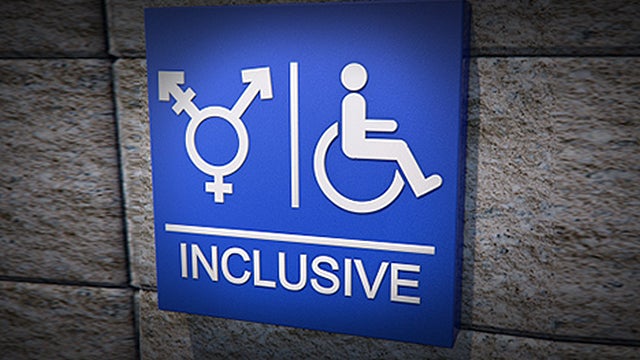 CALLER: Exactly. So that they can take all the male attributes without being criticized about it, that they can be the strong leaders. It’s not just the social aspect, but it’s just easier.

RUSH: So in your experience, then, is there a disgust at being born female, among these people you’re talking about? Or a sadness?

CALLER: I think there’s a jealousy. I mean, the biology of it, it’s easier to be male. You don’t have to do any monthly periods.

CALLER: Socially, at least — well, I think worldwide it is easier to be male.

RUSH: Yeah. But you have to get used to being blamed for everything. I mean, it’s not a one-way street.

CALLER: No. But it’s easy to be blamed if you don’t really care.

RUSH: (laughing) Okay. Look. You have fed the beast. I appreciate it. What he’s talking about if you missed it in the first half hour of the program today, I had enough stories here to chronicle what I thought is evidence of the insanity, the descent into insanity and madness of the American left. And one of the three stories is my discovery of a new safe sex guide published by LGBTQIA.

And the root of their anger — and they’re all angry. All leftists are all angry all the time. They have chips on their shoulder about things you would never dream. But it is rage and anger that fuels them. And in this instance the LGBTQIA group is really, really mad that a bunch of old white guys way back a long time ago named human body parts and organs.

And they did so ignoring the transgenders and the homosexuals and the bisexuals and the whatever the hell other divisions of sexuality that have been created or imagined to exist. And, as such, they are enraged at the term “vagina.” It doesn’t work anymore for them. I mean, we’re talking about people that are not cisgender. They’re transgender, they’re lesbians, gay, bi, and they’re QIA, whatever. And so they’re demanding that these various sexual organs be renamed. I’m not making this up! And they want the vagina to be named “the front hole.”

Folks, I wish I was making it up. I would be considered a creative genius here. But I’m not. So, anyway, our caller was reacting to this. And in this story the justification they give for their rage and anger is sex assignment. The giveaway sentence is “traditional safe sex guides are often structured in a way that presumes everyone’s gender is the same as the sex they were assigned at birth.”

And so in their world, human biology has nothing to do with their sexuality. No. Somewhere along the line they were assigned a sex, and that’s why this group is not cool or down with it, because many of them are not what they were assigned. They want to be something else. He was calling to say the root of this is that a bunch of these trans women and angry feminists actually want to be men. That is the reason for his call. I had to explain it because if you weren’t here and you missed this in the first half hour, the call comes in an hour and a half later, what? I’m doing my best try to keep everything in context here for you. 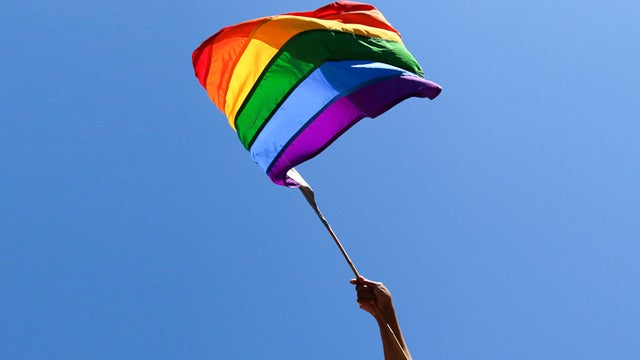 RUSH: This is Scott in Mesa, Arizona. Welcome to the most listened to radio talk show in the country. How are you doing, sir?

CALLER: I’m doing great. It’s a privilege. Listen, regarding the gender assignment debate, I think it’s ironic that these people will argue that it’s a violation of individual human rights to have someone else assign their gender while they’re still in the womb?

RUSH: Yeah. Who would be doing that, by the way?

CALLER: Well, the left of course, we know who’s doing it. But the irony is that they don’t consider the people in womb. How is it a violation of human rights if they’re not even human?

RUSH: You know, this is an excellent point. If what’s in the womb is nothing more than a viable tissue mass or even a potential illness, then how can any sexual assignment be going on in there?

CALLER: Well, yeah. Well, the assignment could be going on, but how do they consider it a violation? Of what? It’s a violation of somebody’s choice, perhaps, but, you know —

RUSH: You gotta really be convoluted to understand this stuff the way these people think. I can pull it off. You’re very close yourself. I must commend you.

CALLER: Well, thanks for the time. I appreciate it. It was my pleasure.

RUSH: Oh, you bet. Look. Even when you get down to who’s doing the assigning, you realize there’s not a whole lot of room to play around in the answer to that question. Who’s doing the assigning? Who is assigning your sexuality in there? Well, I mean, it would have to be God, the supreme being. But since what’s in there is — these people are really a mess.

RUSH: I have another example of the left’s public descent into madness and insanity. This is a story at the New American website. The headline: “Killing Virtue: School Pressured Into Removing Quote Encouraging Girls to Be Ladies.” Now, “the quote was found at Gregory-Lincoln Middle School in Houston Independent School District. Students in kindergarten through 8th grade attend the school, according to its website.”

There’s a wall at this school that has some quotations on it. It’s a decorative wall. But it has a particularly offensive quote on the wall, and this is the quote: “The more you act like a lady, the more he’ll act like a gentleman.” That quote has enraged militant feminazis, and they demanded that the quote be removed from the wall! I have a tweet here from one of these enraged women. There’s a picture of the quotation on the wall and the tweet says: 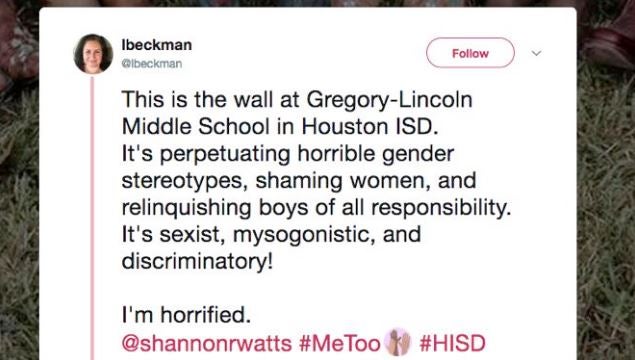 “This is the wall at Gregory-Lincoln Middle School in Houston ISD. It’s perpetuating horrible gender stereotypes, shaming women, and relinquishing boys of all responsibility. It’s sexist, mysogonistic [sic], and discriminatory! I am horrified!” Again, the quote: “The more you act like a lady, the more he’ll act like a gentleman.” It’s an advice quote for young women, and we’ve all been raised with a variation of this quote. We’ve all been raised with it!

It has very many different forms. I mean, parents had a version of this. Bring home the wrong kind of girl, and you would get the quote, you would get the message — and if the girl brought home the wrong kind of guy, her parents would tell her a version of this quote. Now, this particular quote is attributable to Sydney Biddle Barrows. Does anybody remember who she is? The Mayflower Madam. That’s right. She ran one of the highest, high-class escort services in Manhattan and it is thought that she would know about acting like a lady and not.

But a woman saw the quote — a student saw the quote — and was horrified, was scared to death. “The more you act like a lady, the more he’ll act like a gentleman.” She was offended because (impression), “I have to act like a lady in order for him to not act like a brute and a rapist? Is that how it works? The more I…?” No, that’s not what it means, but that’s how she’s interpreting it. So, anyway, the school caved. They caved. I mean, they… Folks, they caved inside of 30 minutes, and the quote is gone.