RUSH: Now, Lanny Davis apparently was on NBC. He was on the Megyn Kelly show and you know what happened? He goes on Megyn Kelly’s show and he made a direct appeal to viewers to give money to Michael Cohen. Lanny Davis said, “Could I take one opportunity to remind everyone that Michael Cohen has suffered a tragic and difficult experience with his family. He’s without resources, and we’ve set up a website called MichaelCohentruth.com that we’re hoping that he will get some help from the American people so he can continue to tell the truth.” 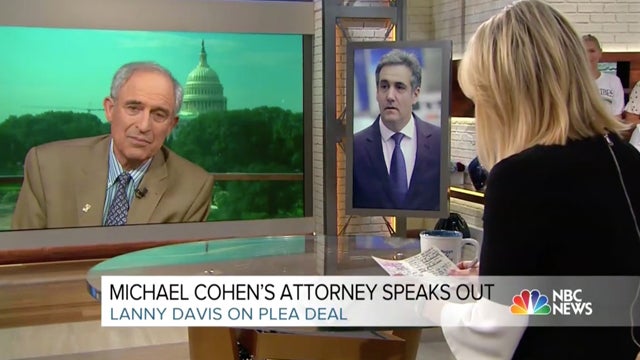 And Megyn Kelly said, “I don’t know if they’re ready to donate, Lanny,” and then her audience started laughing, straight up laughing at Lanny Davis. This is an NBC audience. It’s a Megyn Kelly show, yeah, but this is not the Megyn Kelly of Fox News that would automatically attract a conservative crowd. They laughed in his face, as well they should have. MichaelCohenTruth.com, his lawyer is asking money so Lanny Davis can get paid, not so that Michael Cohen can keep telling the truth.

Lanny Davis wants money. Lanny Davis is essentially asking people to donate to Cohen so Cohen can pay Lanny Davis. And he says. no, we need the money so that Michael Cohen can continue to tell the truth. Why does that cost any money? How does it cost a dime for Michael Cohen to tell the truth? Lanny, all you have to do is put the names of every journalist, New York Times, ABC, CBS, NBC, in a hat and pull one out and call ’em and they’ll be there in five seconds. You don’t have to pay anybody to get ’em to come over and listen to whatever lies Cohen wants to tell ’em.

RUSH: Here’s Lanny Davis being laughed at, by the way, on Megyn Kelly today. This was this morning on her eponymous program. Lanny Davis talking about Michael Cohen needing money.

DAVIS: Michael Cohen has suffered a tragic and difficult experience with his family. He’s without resources. And we’ve set up a website called (audience starts laughing) MichaelCohenTruth-dot-com that we’re hoping that he will get some help from the American people so he can (laughter continues) continue to tell the truth.

KELLY: The – the audience is – they don’t appear ready to donate, Lanny.

RUSH: I don’t think so, Lanny. I don’t think so. You’re in that part of the country where your 60% should have been filling out that studio audience. They were laughing at him. Laughing at poor Michael Cohen, poor sleazebag, has run out of money, needs some money to pay me. But we’re not gonna say that; he needs money to continue to tell the truth.