RUSH: Now, we talked about earlier here about how the Democrats have decided to stop talking about impeachment.

It’s a bunch of news stories in which the advice has gone out from on high for the Democrat upper echelon to stop talking about impeachment. Oh, by the way. By the way. Alexandria Ocasio-Cortez said last week… I missed this when it happened. She said last week that climate change is killing Americans, and the United States government is complicit in allowing it to happen. Not a single elected official, Democrat or Republican, should accept money from fossil fuel corporations. Americans are dying from global warming. 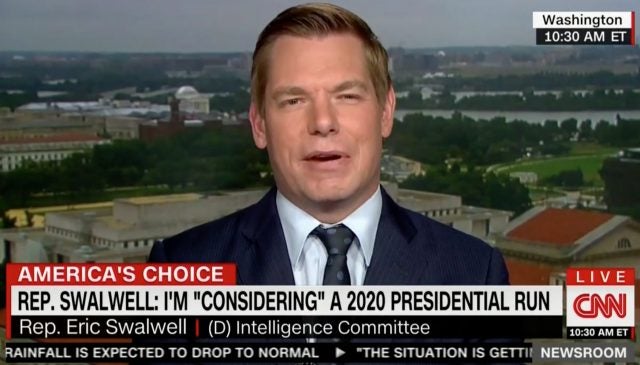 He said yesterday on This Week on ABC, “We don’t have enough evidence to impeach Trump. We don’t want to be as reckless with the facts as he is. I think having thorough investigations, putting forth an impenetrable case, doing it in a bipartisan way is the proper way to do this, but we’re not there yet.” Now, I don’t know if Swalwell is simply following instructions from on high to start deemphasizing impeachment, to don’t talk about it.

Can I ask a question about that? Why are they doing that? Why are they advising themselves not to talk about impeachment? Well, because they think it might hurt their efforts to take back the House. But wait. If everybody hates Trump, as they claim, and if the Democrats cannot wait to vote — if the Democrats are so motivated and so inspired, chomping at the bit, can’t wait to get out there — isn’t it because they want to see Trump impeached?

So what is there to be afraid of? If everybody hates Trump — if everybody voted for Trump realizes they made a big mistake, if everybody is embarrassed by what they did — then why is campaigning on impeaching Trump gonna be harmful? Could it be, ladies and gentlemen, that they know that their primary campaign rhetoric is a pack of lies? We’ve got another poll out: 90% of Republicans approve of Donald Trump as president and his presidency as is at the moment.

That’s gotta rip the heart out of these people in the media. That’s been their primary objective, to separate Trump from his voters — and, yeah, they have failed. Now they’re supposed to shut up about impeachment? That doesn’t jibe with what they say is happening in America, where people are embarrassed, hate, disgusted with Trump, want Trump gone. Well, let’s go to the audio sound bites. We go to Meet the Press, F. Chuck Todd and one of the hosts from NPR do not like the fact that the Democrats are gonna go silent on impeachment. 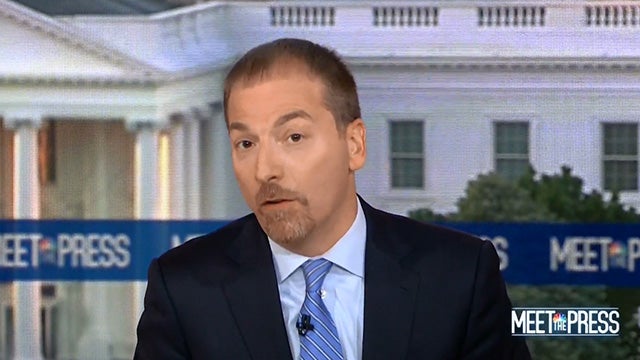 Chuck Todd says to the guest, Joshua Johnson, “There’s some in President Trump’s orbit who think the threat of impeachment actually will motivate his base.”

JOHNSON: I’m just not sure what else Democrats have that’s gonna motivate them to show up at the polls more ardently than the prospect of doing something about Donald Trump. I mean, I understand why Republicans are motivated to keep that agenda in place.

JOHNSON: What else…? Like, what else is there emotionally to get Democrats out?

RUSH: Give me Michael Avenatti? Anyway, the point is F. Chuck Todd is distressed at the Democrats — and, by the way, he’s a newsman. He’s not an opinion guy, right? This is Meet the Press. He’s supposed interview people. He’s supposed to get people to make news. He’s telling the guys, his guests, what he thinks. He thinks the Democrats are screwin’ up.