Martha MacCallum on Fire, Destroys the Grim Reaper on the Mollie Tibbetts Murder

RUSH: Grab sound bites 23 and 24. Martha MacCallum on Fox last Thursday night was on fire. She first had the lawyer for the murderer of Mollie Tibbetts on, and this guy was just… We’ve got the bites. I don’t have time to get ’em in. But this guy was obfuscating left and right. She was not having any of it. Then came the Grim Reaper. You know, whenever anybody dies, you can guarantee that Fox is gonna bring out Geraldo, and they brought Geraldo out to do the appropriate, “You can’t blame every illegal every time one of them commits murder.” Two bites. She really, really was on fire here. Here’s the first. This was Geraldo here setting everything up. 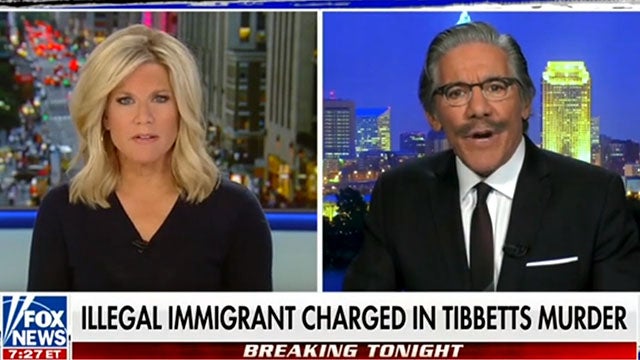 RIVERA: To be called by that bottom-feeding politician an accomplice to this young lady’s murder is something that I cannot abide. He is stereotyping —

RUSH: Wait, stop the tape. Stop the tape. Stop. Dan Patrick earlier that day — the lieutenant governor of Texas — had said (summarized), “Geraldo? I never met the guy, but, for crying out loud, this guy and everybody else are accomplices every time one of these illegals commits murder. All these people are accomplices because they won’t let us do anything about shutting down the border and so forth,” and Geraldo took great offense. That’s what he’s talking about. The “bottom-feeding politician” is the great lieutenant governor of Texas, Dan Patrick.

RIVERA: — typing 11 million people in our country here without documentation. They care for our babies. They mow our lawns. They wash our dishes. They pick our fruit. They pack our meat. They process our poultry. And to characterize that entire group of people as all of them murderers? This case in Iowa is an awful case. This person should be prosecuted to the fullest extent of the law. But what I was doing and what I am doing right now is begging people… I know that most of the Fox audience disagrees with me, but I’m begging you to have compassion and not brand this entire population by the deeds of this one person.

RUSH: Nobody was! Nobody was! They were trying to brand this one guy, who everybody’s trying to defend. Anyway, here’s Martha engaging the Grim Reaper, and it’s really good.

RIVERA: This is a murder story. This is not an immigration story. It is a fact, if we’re talking facts —

MACCALLUM: It’s a fact that he was here illegally, was he not?

MACCAULLUM: I looked at the numbers this morning.

RIVERA: That is a fact!

MACCALLUM: It doesn’t change the bottom line, which is this person —

RIVERA: So then what is the relevance? What is…? (garbled shouting)

MACCALLUM: — who killed this woman was here illegally.

RIVERA: Yeah, and he was also five-foot-six.

MACCALLUM: It adds to the pain and to the misery of the situation —

RIVERA: Are we gonna be go after everyone…?

MACCALLUM: — to know that not only did this happen, but it didn’t have to happen if we had a system that allows —

MACCALLUM: — people to come and go and he didn’t have to work under a name that wasn’t his name.

RUSH: “He should not have been here,” she ended up saying later. He shouldn’t have been here! Geraldo is filibustering there. She was really on fire that whole show on this subject, first with the reprobate’s lawyer and then the Grim Reaper here. But, by the way, this survey that the Grim Reaper cited where he says it’s proven that undocumented immigrants commit fewer crimes per capita? That’s a Cato survey, Cato Institute of a subset of a Texas survey. It’s not a national database. It was a subset of a survey done in Texas.

It doesn’t at all say what the Grim Reaper here suggests that it does. But this is the defense. Every time one of these illegals commits murder, they trot people out. “You can’t tar and feather all…” And nobody is. We’re just tarring and feathering the fact that nobody seems to want to do anything about stopping it, and it’s real simple. They shouldn’t be here. They are in the country illegally, and thus whatever they do need not have happened! You can’t say that Mollie Tibbetts was gonna get killed anyway! She wouldn’t have been killed by this guy, and nobody else has tried to kill her. This is… People are so tone-deaf on this.