McCain Eulogy Convinces Gergen Biden’s the One to Stop Trump

RUSH: One of the eulogies this afternoon at the McCain service, the church in Phoenix, was Joe Biden. Now, apparently David “Rodham” Gergen was blown away by it. I didn’t get a chance to check any of it. It happened here while the program was on. But David Gergen was just saying it was so tremendous that Biden’s eulogy was so wonderful and so tremendous that a lot of people are gonna start wondering, is Biden the one?

Meaning, is Biden the one to get rid of Trump? Is Biden the nominee in in 2020? Is Biden the guy that can get rid of Trump for everybody? And he went on to say that Biden is not too old to run for president. Well, let’s see. He’s gonna have get past Kamala Harris, he’s gonna to get past Fauxcahontas, he’s gonna have to get past Andrew Cuomo. Who else on the Democrat side? There’s a whole bunch of those people. (interruption) Oh, yeah. Cory Booker. Well, yeah, and Crazy Bernie. Absolutely. But just the fact, okay, the guy delivers a eulogy, just to show you how bereft they are. “Oh, my God. Oh, my God. That could be the guy. He could be the guy.”

“The guy to beat Trump.” 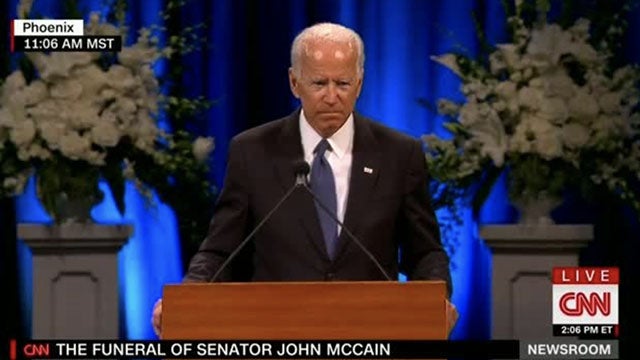 “Yeah. What else matters? We gotta beat Trump. That eulogy. He’s the guy!”

Poor Senator McCain. It’s his funeral and even the eulogies are causing the Drive-By Media and CNN to focus on Donald Trump.