RUSH: Look at this. PETA, People for the Ethical Treatment of Animals, wants to build a memorial where lobsters died in Maine.

“People for the Ethical Treatment of Animals wants to build a 5-foot tombstone where lobsters may have died after a crash on Route 1 in Brunswick, Maine, last week. According to the Brunswick Police Department several of the crustaceans that a Cozy Harbor Seafood truck was carrying got crushed as a result of the rollover. ‘It was something I’ve never seen before,’ said Detective William Moir of the Brunswick Police Department. ‘Some lobsters were loose on the ground from being spilled over so we went to work to save the ones we could.'”

The humanity! The cops went out there trying to save the lobsters! 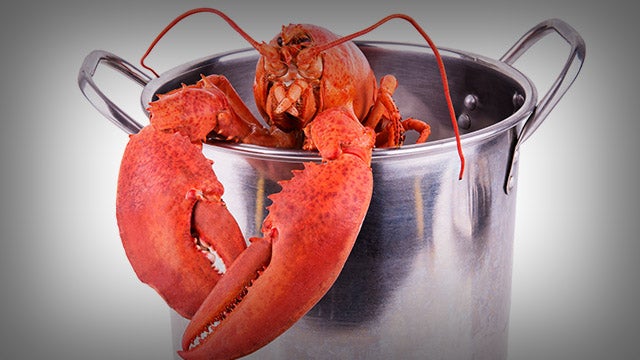 “The organization sent a letter to the Maine Department of Transportation asking if it could create –” I’m not making this up “– the roadside memorial where the lobsters lost their lives. ‘Countless sensitive crustaceans experienced an agonizing death when this truck rolled over and their bodies came crashing down onto the highway,’ PETA Executive Vice President Tracy Reiman said. ‘PETA hopes to pay tribute to these individuals who didn’t want to die with a memorial urging people to help prevent future suffering by keeping lobsters and all other animals off their plates.’

You’re watching the Katie Couric episode. That’s where you picked that up. They scream when you — (laughing) I don’t mean to be laughing, ladies and gentlemen. I laughed. I lost control there for just a brief moment. They scream when you cook them. Okay. Look. I just had to get that out of the way. This is the kind of thing I might have sitting in front of me for three hours and never mention, so I just wanted to get it out of the way ’cause it’s just another sign of how depraved and insane the left is descending. It’d be one thing if there was mutual acknowledgment and agreement on what insanity is, but there isn’t.