RUSH: Mitch McConnell — folks, I don’t know if you’ve heard this — there is a story that’s out today. It’s a story that’s the result of polling data that — I pause breathlessly — says the Democrats have a real chance of taking the Senate too.

Did you know that? Yes. Not only is there going to be a red wave where the Democrats retake the House of Representatives, it looks now like the Democrats could take control of the Senate too. So the Drive-By Media went to Mitch McConnell to find out the truth on this, get his take on the possibility. Mitch McConnell speaking with reporters about the upcoming midterm elections.

MCCONNELL: We know this is gonna be a very challenging election on the Senate side. I’ll just list you a bunch of places that are dead even: Arizona, Nevada, Tennessee, Montana, North Dakota, Missouri, Indiana, West Virginia, and Florida. All of them too close to call and every one of them like a knife fight in an ally, just a brawl in every one of those places. I hope when the smoke clears that we’ll still have a majority in the Senate.

Just like in 2016, there isn’t a Republican around that thought the Republicans could win the White House in 2016. Everybody thought Hillary Clinton was gonna win it. And not only that, they all thought the Democrats are gonna win the House. The House Republicans, the incumbents, were not planning on being in the majority. And when Trump won, they didn’t know what to do. They weren’t set up for victory. They weren’t planning on it.

Now they were gonna have to lead, and now the president was gonna be a guy none of ’em liked — well, not none of them, but many of them, particularly in the leadership didn’t like. I guarantee you, on election night in many sectors of the Republican Party there was not celebrating. They got it in their heads they were gonna lose. And they were gonna be the opposition party, and the job was gonna be to try to contain Hillary like they tried to contain Obama, but that was it.

As long as they keep the donors donating, saying and doing whatever they had to do for that, then that was fine. And it sounds like the same attitude’s crept in here. “Ah, man, I hope when the smoke clears we’ll still have a majority in the Senate.” Well, hope isn’t gonna get it done! Voters are gonna have to — once again, it’s gonna come down to Republican voters, which it always does.

But I want to go back to 2016, September 29th, 2016. So this is a month and a half before the election. Same place, Capitol Hill, Mitch McConnell, Republican, Kentucky, held a press conference. During the Q&A, this is what Senator McConnell said about the 2016 Senate elections.

MCCONNELL: It’s pretty obvious this was gonna be a really challenging cycle for us. We’ve got knock-down-drag-out, sort of like a knife fight in a phone booth, New Hampshire, Pennsylvania, Ohio, Wisconsin, Illinois, Nevada, Indiana, Florida.

Now, look, I’ll give the benefit of the doubt. It could well be that Senator McConnell knows this is all a crock, the Democrats aren’t gonna win anything, but doesn’t want to say that because he doesn’t want to fire the Democrats up or do anything. The strategy might be just downplay it and let ’em think what they’re thinking and shock them on Election Day. But I don’t think that was the way it was in 2016. In 2016, these people all expected to lose.

With Trump? The Republicans thought they were headed to practical obscurity! With Trump winning the nomination, it could be the Republicans would lose every race because these guys thought everybody hates Trump. Oh, my God. They were embarrassed, they couldn’t believe that Trump was gonna be the standard-bearer, and it went into election night with that as the predominant attitude. And it sounds like it’s happening again. Now, it’s not related to Trump per se here, Trump’s not on the ballot. But it’s dispiriting. But, as I say, it always comes back to voters anyway.

I want to share with you something written by Conrad Black, just as kind of a counterweight to this. Since I don’t know what McConnell’s strategy is here, I’m gonna chalk this up to fatalism. He sounds fatalistic: Yeah, we could lose, look at all these races, too close to call, knife fight in a phone booth, knife fight in an alley. Hope when the smoke clears that we’re still running the show. 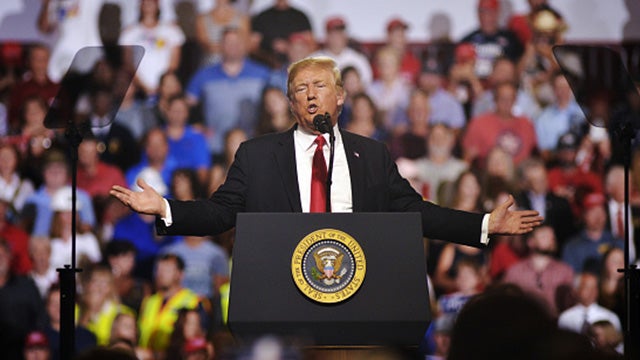 Conrad Black has written a great book about Trump, Trump’s presidency, continues to write columns during the week about Trump and the ongoing political scene. His latest yesterday at American Greatness, the column titled, “Pop Guns On the Left Don’t Hit Their Target.” I just want to give you some pull quotes on this thing.

I’m not gonna read the whole thing. But I want to share this with you because this is an entirely different attitude. This is an attitude of upbeat optimism, of being positive and confident that the Democrats are the ones that ought to be quaking in their boots and shooting themselves in the foot.

First pull quote is this. “But Obama’s smug, slick schtick won’t cut it anymore. The country has not forgotten the flatlined compensation levels, the tax increases, the swollen food stamp and welfare rolls, the oceanic deficits, health care shambles, evaporating red lines, appeasement of Iran and North Korea, disparagement of traditional Americans, and apparent indifference to rising urban violence. People have not forgotten that that’s Obama.

“Now, in a one-on-one contest Obama might beat Trump in an election to lead a cotillion, but in an election campaign where neither of them is a candidate, like this one, Trump will tear Obama limb from limb on his record. Almost unnoticed in the din of the Democrats’ campaign launch were several revelations ominous for the Democrats. There was evidence that Christopher Steele, the discredited Clinton-paid anti-Trump dossier author, even after being fired by the FBI for indiscretion, was pipelining misinformation via compromised Justice Official Bruce Ohr to a senior member of special counsel Robert Mueller’s staff.

“It seems clear that the president is preparing to order the release of all that the congressional committees have been demanding from the Justice Department. And a grand jury is in session, hearing evidence against fired deputy FBI director Andrew McCabe and probably others. I expect that an unacceptable level of political corruption of the FBI and Justice Department under Obama will be unearthed before the election and that the Trump media firing squad will be overcome. Their pop guns of the last three weeks have not moved the ball, and that’s all they have.”

Now, that’s how somebody who’s looking at what’s going on intelligently, reasonably, and optimistically sees things. Those people are few and far between. Even in our media, even in conservative, the Democrats, I think Conrad’s exactly right. As I watch these people, I can’t imagine any reasonable person wanting to vote for any of this. And if people do, it has to be that they’re dissatisfied with Trump for some reason, but it will not be performance. It won’t be job performance as conditions on the ground, economic circumstances and so forth.

We hear the same thing every four years, every two years. Voters are tired of Republicans, they’ve made a mistake. They realize they can’t wait to vote for Democrats. We heard the same thing before the 2016 election. All of it, in fact multiply that times two, we heard it compounded over and over again how people couldn’t wait to vote for Hillary. Trump’s the biggest buffoon that ever came down the pike, it’s a joke, and look what happened.

And ever since then ever bit of good news has been relegated to irrelevancy and a bunch of lying things that haven’t happened continue to be reported as though they have happened and so forth. I don’t know. I’m with Conrad on all this, is the bottom line.