RUSH: I think, folks, the National Hurricane Center just released the new track for Hurricane Florence. Normally the tracks are every six hours, the revised tracks. So Eastern Time, 11 a.m., 5 p.m., but there’s also, when you get closer, intermediary data updates every three hours. So we just had one at 2 o’clock. It looks like a new track. I’ve never seen that. I’ve never seen a new track issued at the three-hour interval.

I just had a chance to glance at it here before the hour began, it looks like landfall, according to the latest track, is right at the South Carolina-North Carolina border. And it also looks like that if you’re in the Raleigh-Durham area, you’re now out of the cone. It doesn’t mean you’re not gonna get effects, but you’re not in the 30-inches-of-rain area if you’re at Raleigh-Durham. And of course we’re still two days out. This is Wednesday, and the action is Friday. This cone is gonna keep changing.

You know, I want to go back to what I said in the opening hour of today’s broadcast and yesterday’s too. I have lived through I don’t know how many hurricanes now, since we moved to Florida in 1997. I have become a consumer expert. I’m an expert consuming and analyzing meteorological data and on-the-ground effects of these storms. 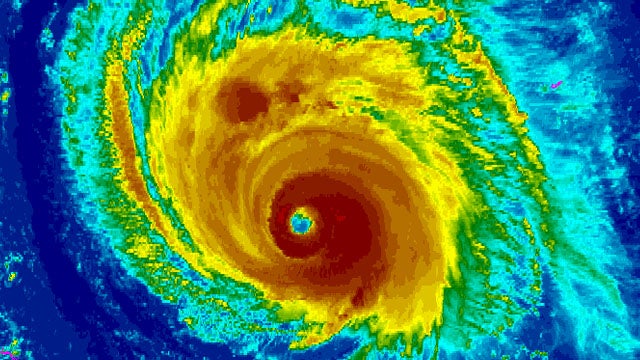 Prior to moving to Florida I couldn’t have cared less. I’m sure to most of you this is of passing interest, so I appreciate your indulgence because people that are in the line of fire here, this is all they care about, it’s all that’s on their mind and how to deal with it and are they gonna be in the primary blunt force of this.

The experience that I’ve had with these is that when the forecasts first designate a landfall, and depending on the storm it could be four days out or five days out, and model forecasts give you greater forecast distance than that. But the Hurricane Center forecast, the official cone, four or five days out that cone’s gonna change.

And this is not a criticism. It’s simply that there are so many complexities involved in these storms that affect them, the steering mechanisms in the atmosphere and the ocean temperatures, the eyewall rebuilding cycles. You know, eyewalls destroy, get rebuilt during hurricanes, some of them. And they weaken for brief moments when the eyewall is being rebuilt, but they can come back even stronger after that. The eye can be even bigger. It’s happened in this case a couple of times.

But my experience is that forecasts four or five days out, they’re close within 250 to 400 miles, but the actual landfall four days out never holds. And again, I don’t want anybody taking this out of context. This is not a criticism. It’s just that’s why they don’t specify in their actual text forecasts, they never mention cities until you’re hours away when it’s pretty certain where it’s gonna hit.

The only reason I’m making this point is that whatever the track says today at 2 o’clock Wednesday afternoon, it’s gonna change again. It may not change much. But this is not the last one, just like the track forecast on Monday is now out the window. It’s entirely different today than it was two days ago. It’s just the nature of these things. And that’s gonna be the case going forward.

As we get closer, then the variance is going to shrink. As we get closer, as the hurricane gets closer to land, we’re gonna have a much greater idea specifically where it’s gonna hit. So it’s not gonna change dramatically unless the Atlantic high would move out, for example, and there’s model forecast that says that’s gonna happen. If the Atlantic high moves, well, that totally changes the steering mechanism of the hurricane. If that happened, if the Atlantic high moved out, this thing would start making a due north turn and Northeast faster than you could shake a stick at it.

When I say out of the cone that means we don’t have to worry about the eye, if they’re right. It doesn’t mean you get no effects. But the amount of rainfall Raleigh is gonna get according to forecasts today, for example, is significantly less than what just yesterday they thought. So you have to keep a sharp eye on these things because they are changing constantly. 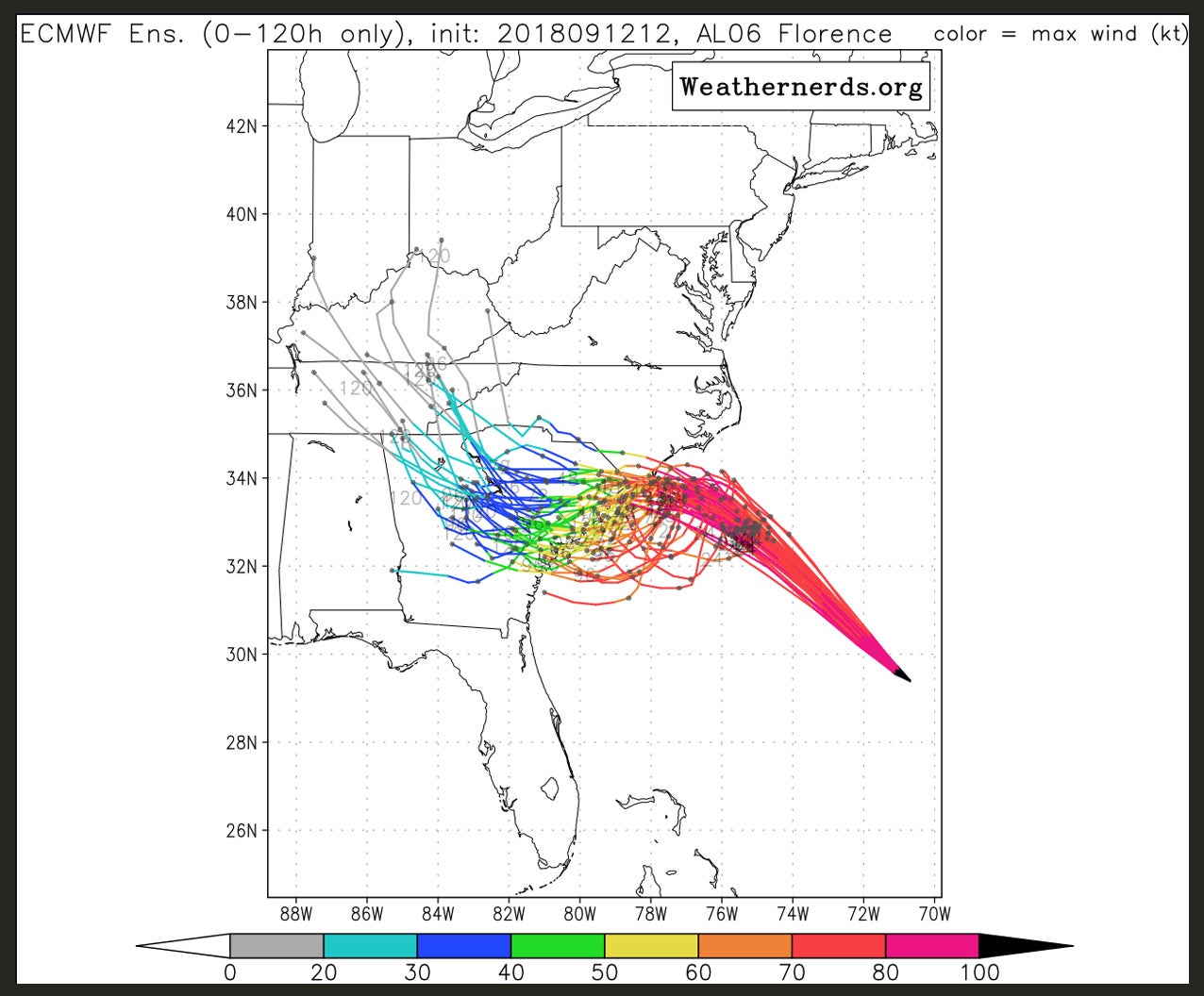 This track that it took late yesterday was never, not a single model had this move until yesterday, late yesterday. And it was the ECMWF, which is one of the euro models. Every model was bunched together, they were all consistent, all saying the same thing. And then this thing, when it ran late yesterday afternoon it’s the only one that ventured and showed the thing moving south. And the Hurricane Center now thinks it’s right so everybody’s moved their track south to follow that one model. That’s what’s going on here.

And if that model changes we don’t know if they’ll continue to follow it or not because they make their own forecasts independent of these things. They do it on their own after collecting, analyzing all of this data. But you can generally, with every storm, if you are a hurricane veteran like I am, you can pick out the model that they trust, and it’s different with every storm too. There is not one model that you can make book on every storm, follow that baby and you’ll know where it’s going. That doesn’t even exist. Even for us consumers it’s a sigh.

That’s why I listen to these brain-dead so-called experts that CNN finds talking about this. They had one on last night who runs some environmental nonprofit claiming that the reason this hurricane’s track is what it is is because America has so warmed the planet that the tropics have gotten so hot and pushed so far north that they’re moving the jet stream north.

Nothing could be further from the truth! And yet there it was on CNN as gospel. And, meanwhile, CNN’s ripping into people who do know what they’re talking about, lying about what they’re saying and so forth and so on. But, anyway, even FEMA, the latest from FEMA is this storm packs a Mike Tyson punch. Mike Tyson punch. And it may hit as a Category 3, not a 4, not a 5. It’s gonna be a Category 4 close to shore. But according to this 2 p.m. track, it’s a 3 when it actually makes landfall.

Well, if it’s a 3, that means there’s a whole bunch of storms a lot more powerful than this, and yet this one’s being reported as the worst, the biggest, the most devastating ever. And it’s because of Trump being responsible for it.

RUSH: Okay, a couple more things on the hurricane. There was just a rerun of the ECMWF model (the euro model) that the hurricane center has chosen to follow, and it moved just slightly back north. Not significantly for the hurricane center to move the track yet. But the euro model they’ve been following, the one that moves south has moved. They just ran it, recent run, and it moved just a little bit north. Now, you can go nuts like we do in Hurricane Alley following this stuff. But it becomes fun for those of us who are in the line of fire of these things.

You know that every forecast is not the last one. But the euro… It’s not enough of a move north to cause any panic, but it is interesting that it stopped moving south. Now, in combination with that, I just got a note from a trusted meteorological expert friend of mine complete with charts, graphs, various colors showing where the jet stream is. (That’s in red on this particular chart.) What it shows is that it is pure weather events that are determining this hurricane, its strength, its size, and its direction. It’s nothing but weather events.

There’s no climate-related impact on this hurricane, and it can be demonstrated in all of the meteorological data they can amass to study this thing. It’s important to point out. There’s nothing, no climate change. There’s no “tropics moving north because of warming” that’s causing anything. It’s literally… There are meteorological reasons why the jet stream is where it is, is the point, and one of the reasons it is where it is is the Atlantic high out there which is blocking everything. So that’s the latest.