Where Does the “Right to Be Heard” End?

RUSH: You know, one of my big bugaboos, ladies and gentlemen, is this business of “right to be heard.” People misconstrue the First Amendment’s right to free speech to also mean right to be heard, and we’re hearing it now in the case of Dr. Christine Blasey Ford that she has “a right to be heard.” This is all part of the left trying to stand our system of jurisprudence upside down and on its head. “Ford should be treated with respect, and she deserves an opportunity to share her story.” Well, she did. She wrote about it in the Washington Post. 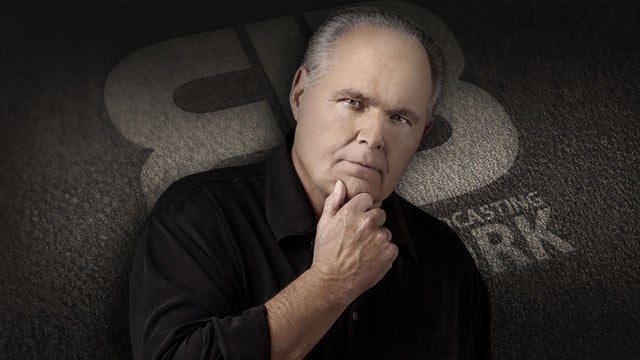 The Drive-By Media has been repeating her story ad infinitum for how many weeks now? Even our good friends, some conservative commentators, are hell bent showing the media/left that we can be open-minded. Even as conservatives, we are suggesting that she should be treated with respect and she deserves an opportunity to share her story. Well, let me ask this: Once it becomes pretty obvious that a person’s making false claims of attempted rape, at what point do we draw a line and say, “We no longer have to grant this opportunity to be heard and share a story”?

Let me call your attention to the accuser in the Duke lacrosse case. Remember how that panned out? Here’s the accuser, and the white Duke lacrosse team guys were automatically guilty. Why? Because they were white and because they played lacrosse. (impression) “Lacrosse is considered a sport for rich Republicans and people that belong to country clubs — and therefore, they’re not real people. They’re not average, ordinary people. Who plays lacrosse? Lacrosse is a phony, nose in-the-air game. Who cares! Duke lacrosse players!”

And the accuser was a poor black woman who made her living by dancing with few clothes on next to a pole whenever people hired her to do so. She was assumed to be automatically credible and believable. Why? Because of who she was accusing and because she was a minority. Minorities are always gonna be believed by the left. They wouldn’t make it up and the left wants them to be telling the truth. Remember how that played out? Those men on the Duke lacrosse team’s lives were targeted for destruction.

You know what I remember about that? Even when it became obvious that the accuser had made it up, it was one of the hardest things in the world to get the charges dismissed anyway because once prosecutors… In this case, his name was Mike Nifong. They got rid of him. But once charges are made, getting them withdrawn seems like something the system isn’t equipped for. You can attest to this, Dawn. You’ve been in court. When there are charges, they have to be dealt with. “We don’t withdraw the charges!

“Even if there’s evidence to prove that they’re wrong, we have to see it through.” It took weeks to get those charges withdrawn, even after it was learned that she had made up the whole story. That’s what I remember about that: A newfound appreciation for people falsely accused. The charges don’t go away, even at the moment it’s discovered that they’re made up. It took, I think, the governor a new prosecutor — and even when they withdrew the charges, they did it in such a way as to cause as little damage to the department that did it. I mean, they did dump all over Nifong. But, boy, it took a long time.

So do we respect the Duke lacrosse accuser? Do we respect the woman who accused an entire fraternity in Charlottesville? That’s the Rolling Stone story. The writer just made it up with a woman who was claiming she was gang raped by all these people. Do we treat her with respect? At what point…? is my question. At what point do we turn from hearing a person out over and over and over again to then rightfully condemning them for making it up and telling a lie to destroy innocent people? Ask the Duke lacrosse guys if they will ever…

Once it’s learned… As they go through life, once it’s learned who they are, the first reaction is, “Oh, you’re the guys accused of rape. You’re the guys that they said raped that that poor dancer.” Even though they know that the guys were exonerated! That’s how you’re known. This is what they are attempting to do to Brett Kavanaugh, and now this despicable Michael Avenatti is accusing Kavanaugh and Mark Judge of participating in the targeting of women with alcohol and drugs in order to allow a train of men to gang rape them!

We don’t even know who this accuser is, and Avenatti — at this moment — is demanding to be heard by the Senate Judiciary Committee. And he’s using the personal pronoun “we” demand to be heard. We don’t know who “we” is. Here’s the sticking point: If the Republicans just hold together, they can cram all of this right back down the throats of the Democrats in a vote to confirm Kavanaugh. If they hang together. Now, over the weekend… Because I’m a powerful, influential member of the media, therefore people attempt to influence me into doing their bidding.

I have to be very wary and very careful of all of these come-ons to me, and they’re… Oh, some of them are so flattering, you wouldn’t believe! Anyway, scuttlebutt over the weekend was that Jeff Flake, the outgoing senator from Arizona, was gonna vote “present” for Kavanaugh on the committee. We don’t know about the whole Senate. And then I think Flake was out saying, “No, no, no, no! That’s not true. It’s not true.” But, you know, Jeff Flake until Trump came along was actually…

I mean, some of you will argue with me on this. But for the most part, Jeff Flake was a conservative. I mean, it’s questionable to say reliable, but he was a conservative. He’s not that anymore, which is why he’s now a hero to the Drive-By Media and the Democrat Party. Kavanaugh also, by the way, has calendars from 1982 that show he was out of town nearly the entire summer, which is when the alleged incident with Blasey Ford is believed to have happened.

You know what they will say? “He made ’em up! He created those calendars in the past two weeks! He’s a lying skunk is what he is!” That’s what they’ll say, or they’ll refuse to admit them on the grounds of they can’t be verified. I think it’s time to end the flexibility on this. Grassley has got to call the vote. Be done with this and take it forward or this circus is never gonna end. By design. I will just tell you this again.

If Grassley gives the Democrats enough time, they will eventually produce a woman who claims to be Kavanaugh’s secret Russian wife who Trump paid to urinate on the Obamas’ hotel bed in Moscow. Oh, yeah! Kavanaugh is a bigamist too. Nobody knew but he’s got a wife in Russia. She’s gonna come forward. She’s gonna say she’s Kavanaugh’s wife. She’s been Russian for as long as she been born, and she was paid by Trump to hire a bunch of prostitutes and go urinate on the bed Obama slept in. They will pull out all the stops.

You know when event happened? March of 2006. March of 2006 to April 2007. After 13 months, the charges were dropped. There are stories that the case was settled for $60 million, $20 million to each of three Duke lacrosse players. Their lawyers deny that their settlements were anywhere near that large. These three guys — Seligmann, Finnerty, and Evans — to this day have not talked about it. You talk about a gross miscarriage of justice? They didn’t do it! They never did do it. It was made up from the get-go — and the left?

The faculty at Duke University… I forget what percentage. It was a large percentage of the faculty wrote letters admonishing these kids and claimed they should be expelled! Just like the Hollywood actresses in this case: “We believe her.” On the basis of what? “Well, she said so!” Right. So can’t question that, and the accuser doesn’t have to prove anything. The burden of proof is on the accused. There’s a reason why that’s not incorporated into our system of justice.

CALLER: Oh, thank you, Rush. It’s an honor speaking to you, sir.

CALLER: Rush, you made a great point before how, you know, back in the day that had the left been acting like this, you could take a bunch of votes away from them and the midterm, you know, we take 10, 20 votes, and we would have the seats. But today is a different day, Rush. You know, with these kids in college now, you know, that are able to vote. And even the people that are like in their thirties and forties, their thinking is a lot different. And it’s just… That’s how their crazy thinking is. I mean, you would think that we would get a lot more votes, you know, to our conservative side. Because I can’t see how anybody would want to vote Democrat with how great the president’s doing, and the garbage that the left is doing to the president and to Judge Kavanagh.

RUSH: Well, get this. Let me interrupt you. I’m sorry, but we’re running out of time, and you’ve said something here I want to react to. One of the reasons is — and I can’t tell you how it bugs me to have to admit this! But one of the reasons is people don’t know how good the country’s doing. The press is not filling them each day with news of the recovering economy. There was a story I saw over the weekend of some Republican, elected Republican.

They had taken some polling, internal polling, and they discovered… It was said to me, “Republicans have learned that the tax legislation, tax cuts are not helping them at all, that people are blaming the Republicans for tax cuts because they think the only people that got tax cuts are corporations and the rich.” Now, the tax cuts and the wiping out of regulations is why this economy is burgeoning, because everybody — and a lot of people — got significant tax cuts resulting in more disposable income.

Which encourages economic activity, which we are seeing. But because the media (and probably their teachers in school) are out there saying, “Only the rich and corporations ever get tax cuts. You never do! The Republicans don’t care about you!” If that’s all people hear, that’s what they’re gonna believe. Now, part and parcel of this is the Republicans just don’t know how to do PR — and they don’t even try ’cause they think they will not succeed getting their message out because of the media blockading it.