Donaldus J. Trump Is Wiping the Floor with People at the U.N. 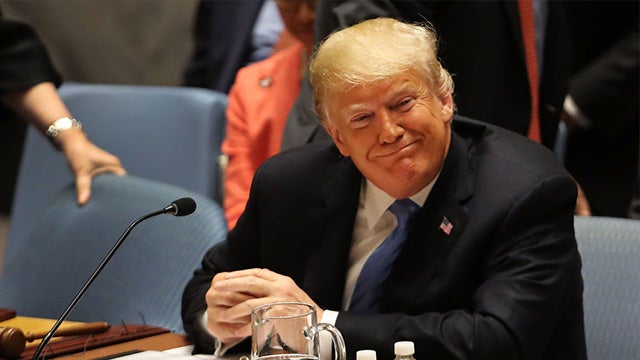 It was his turn. It’s the United States’ turn. So Trump chairs the meeting. Do you know how the deep state was panicking over this? Conservative, Never Trumpers? “You mean we’re gonna have this guy up there chairing a meeting at the U.N. at the Security Council?” They were… Oh. They thought Trump would start throwing his shoe through glass windows and stuff. Trump pretty much led off by saying, “The ChiComs are trying to interfere in the 2018 elections. The ChiComs are trying to destroy Republican chances,” and Trump said, “You know why?

“Because I’m wiping the floor with them on trade deals. The ChiComs are very unhappy at the success of my administration, at the success of the U.S. economy.” So now Trump has thrown a wrench into the gears. Usually it’s he being accused of colluding, collaborating with the Russians over 2016. Now Trump says the ChiComs are trying to steal the 2018 elections away from the Republicans. So, while all this is going on, Trump is literally making tracks at the United Nations.

About the only things the Drive-Bys have been able to say is that they laughed at Trump when he talked about how his administration has done more good in two years than any other administration in the history of the planet. Well, they’re lying to you about when the attendees or the audience started laughing. There was some chuckles, just a little few chuckles when President Trump made commented that he’s done more in two years than most administrations have done ever. There were some chuckles and Trump said, “Well, that’s not quite the reaction I was looking for.”

That’s what got the big laughter, not Trump’s claim, but his reaction to the initial little wave of chuckles. And that’s it. That’s all the Drive-Bys have. The Drive-Bys other than that are ignoring Trump at the United Nations. They are ignoring economic data. They are ignoring everything going on that Trump is touching, other than Kavanaugh, because there’s nothing they can do to destroy it. There’s nothing they can do to take it down, and I don’t think they even want to try to convince people.

But the Never Trumpers in conservative media circles in the United States are continuing to try to laugh and act mock shocked and afraid.