RUSH: As to the political nature of this, we mentioned the name Brian Fallon to you a couple of times in the past two days. Brian Fallon was a spokesman for Hillary Clinton’s presidential campaign, her failed presidential campaign. Brian Fallon is an angry, vindictive, bitter, and very sore loser. He posted what many people say look like veiled threats to Kavanaugh last night. He called Kavanaugh an “attempted rapist” and vowed that Judge Kavanaugh, if confirmed, “will not serve for life.” 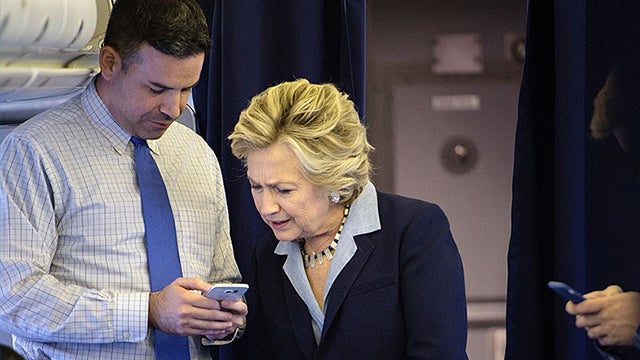 Currently, Brian Fallon is the executive director of something called We Demand Justice. It is a front group for another liberal big-money group called the Democracy Alliance. He tweeted, “If Senate GOP ignores Dr. Blasey Ford and tries to muscle an attempted rapist onto the Supreme Court: 1. They will pay dearly this November. 2. Senators up in 2020 (Collins, Gardner et al) will feel intense heat for next two years. 3. Kavanaugh will not serve for life.” That is a veiled threat. He didn’t add any clarification. He “will not serve for life.”

What’s a reasonable person’s initial reaction to that? 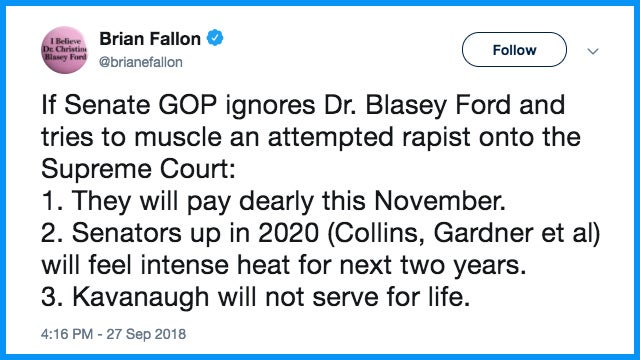 I’ll bet you the initial reaction is not, “Yeah, we’re gonna impeach him. If we win the House and we win the Senate, we’re gonna impeach him. We’re gonna throw him off the court.” That’s not what people’s initial reaction is. When the social media universe sits there and sees, “Kavanaugh will not serve for life,” they think of something a little bit more dastardly. But this is not partisan, says Cory Booker. Oh, no, no, no, no, no, no, no! It’s not partisan. This is about the heroism of Dr. Ford. Cory Booker is still talking. He’s gone way beyond his limit. So I gotta find out what’s shaking here.