The Destruction of Kavanaugh Is All About Trump

RUSH: Jeff Flake is on television in Boston right now talking about his decision to seek another FBI investigation, and I have some questions about things that he’s saying. Greetings, and welcome back. Great to have you. It’s 800-282-2882 if you want to be on the program. the Trump sound bites are coming up. Hang on. Jeff Flake… There’s an audience there. I don’t know what this event is. It looks like it’s a… (sigh) I thought I saw banners in the backgrounds said “Forbes.” I don’t know what this is. Doesn’t matter. 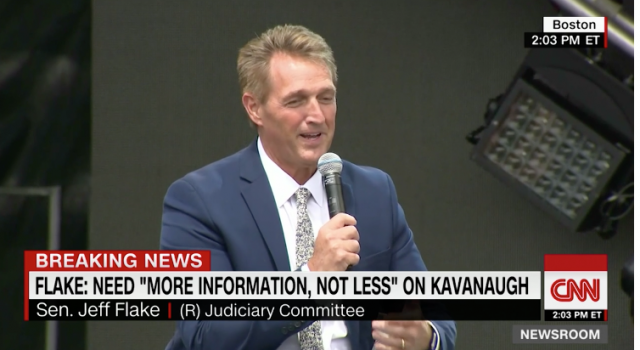 Flake said (summarized), ‘The reason I supported an FBI investigation is it’s good for everybody. We need more information, not less.” We do not have a shortage of information. I can blow up — I can nuclearize — everything they say that they think substantiates and backs up more investigations. How much more is necessary? Why didn’t they they do this when Feinstein got the letter? Why hold it in reserve? She doesn’t have anything to tell anybody unless she now commits perjury.

She doesn’t know where. She doesn’t know when. The people she says were in the room all deny it. What is there to investigate it? What more is there to learn? “Kavanaugh’s a drunk.” Oh! Six FBI investigations haven’t shown that? “Kavanaugh, he’s not got the right judicial temperament. Look at the way he behaved at the committee.” What about the years he’s served as a judge? Why don’t you look at that, instead of a guy naturally, properly outraged at being destroyed by the Democrat Party!

His attitude made perfect sense! More information is better than less? Nobody is talking about less information here. Nobody is trying to suppress information here. Nobody’s been trying to suppress anything. Kavanaugh has answered more questions, more written questions than all Supreme Court nominees combined! There is not a shortage of information! There has not been a short shrifting of any investigation. But there’s another thing, maybe not the thing, but this is another thing that really grates on me.

Jeff Flake just said — and he’s not the only one. There are a lot of people saying this. (paraphrase) “After Christine Blasey Ford’s credibility testimony, I’m getting calls from women all over America who’ve been inspired to come forward because of her brave and courageous testimony.” Well, now, wait a minute. Didn’t Anita Hill cause women to come forward in droves? And what about the #MeToo movement itself? Didn’t Harvey Weinstein cause women to start calling in and coming through in droves saying, “Yes, it’s happened to me”?

And then every other person named. Matt Lauer, Les Moonves — NBC, CBS — all of these #MeToo guys that have been named and called out. Why didn’t that inspire women all over America to call Congress and say, “Yeah, it happened to me, too”? In other words, they’re asking us to believe that women are out there suffering alone, suffering in private, suffering in anonymity, and it was Christine Blasey Ford and her testimony which is causing women to call Congress in droves.

Well, what have women been doing all during the #MeToo movement? Don’t misunderstand me. I’m saying that she’s a late arrival to this. The idea of men abusing women and the #MeToo movement… I mean truthful stories of it. Don’t misunderstand me here. She’s by no means the first. Women have been coming out of the woodwork claiming Hollywood this, Hollywood that abused me. This guy mistreated me, raped me, whatever. How about the University of Virginia Rolling Stone story? 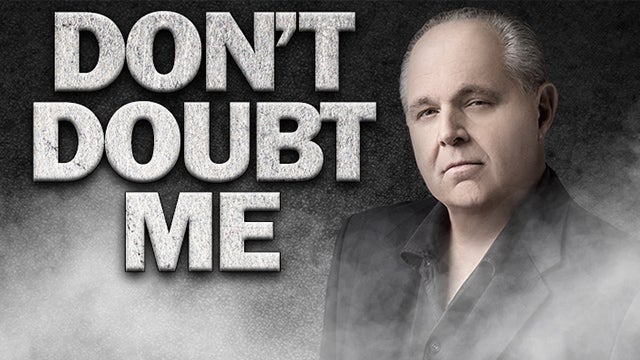 How about Lena Dunham talking about all the horrible things that have happened to her? Haven’t all of these stories caused women to feel newly emancipated to come forward with their stories? And yet, on the tail end of the #MeToo movement — after Clarence Thomas, Anita Hill and so forth — Christine Blasey Ford goes and testifies and Flake says, “I’m hearing from so many women who are saying…” (interruption) Well, no, my point is that I think anybody can say that.

But we don’t know who’s calling these people, and we don’t even know if the people calling him are not Democrat activists to begin with just to create the phone traffic. My contention to you is that the #MeToo movement alone has no doubt inspired a lot of women to courageously step up and accuse guys that have mistreated them. It’s not a new phenomenon. It’s not something for which she deserves all kinds of credit because this is at the tail end of this new awareness and sensitivity.

And yet it’s being spoken of — Christine Blasey Ford’s testimony and her inspiration is being spoken of — as though it’s a standalone and it’s never happened before. And that adds to her credibility, don’t you see? And I think we’re all being played. Oh, yeah. I do. (interruption) No. I’m not accusing… I’m not saying women aren’t coming forward. I’m saying it’s not a new thing that they are. Believe me. (chuckles) Talk… (chuckles) Go ask Harvey Weinstein, go ask Matt Lauer, and go talk to Les Moonves and ask them if they think this is something relatively new here that started happening because of Christine Ford.

It isn’t. It’s all part of the plan to make this particular incident revolutionary, new, and so important because this brave, courageous woman is causing other women to be brave in ways they’ve never felt like being before. And I think that’s not right. I think the sensitivity, the consciousness raising has been going on since Weinstein or even before that. But every time there’s a public incident like this involving male abuse or alleged male abuse, part and parcel of it is, “I’m hearing from women all over America who are so thankful to Dr. Ford because she has given me the courage.”

RUSH: Well, Jeff Flake just lost it. It’s the Forbes something for under 30 summit meeting. It’s in Boston, and he just lost it. He said, “I’m a man without a country. I can’t support Donald Trump. I can’t vote for Donald Trump. Look what he said about John McCain. Look what he said about Mexicans. I can’t support him,” and that’s what this is all about. Like I said in the first hour of this program, this really… When you strip this down to what it’s really about, it’s not about Kavanaugh. 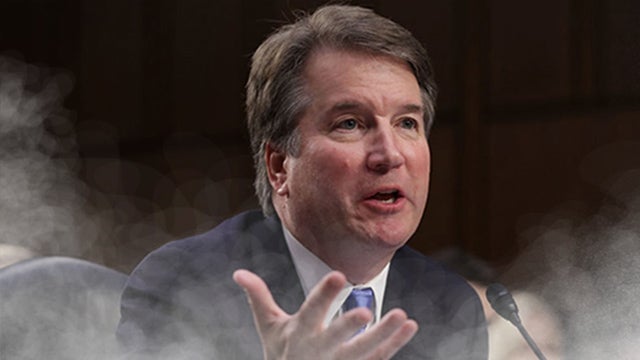 That makes this an even bigger shame because he’s gonna be destroyed as the Democrats attempt to get rid of Trump. That’s what this all is, and the reason they targeted Flake is ’cause then that Flake hates Trump. Flake can’t get reelected in Arizona because of Trump. Flake despises Trump; he has for I don’t know how long. He is eager to screw Trump while making it look like that he is standings in solidarity with the abused women of America. But that’s not what this is about.

It is that the Democrats and the Republican-conservative Never Trumpers are trying to destroy the presidency that was duly elected by the people in 2016. That’s what needs to be used to generate turnout for Republicans — House candidates, Senate candidates, and all over the country — in November, because that’s what this really is. And Kavanaugh is caught in this crossfire. Make no mistake. I mean, they’re happy to take him out because of who he is and what he represents, but it’s Trump they’re aiming at.