Cartoonist Who Smeared Me in 1995 Does It to Kavanaugh 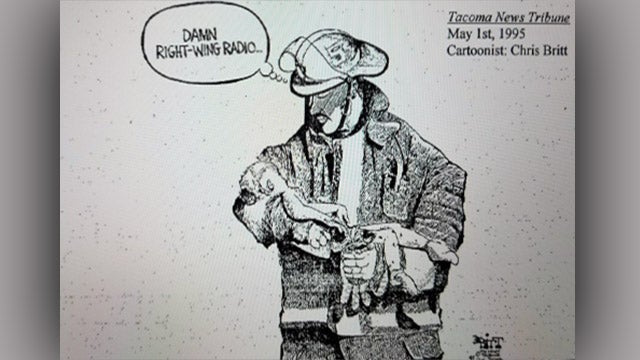 This cartoon, ladies and gentlemen, was drawn shortly after the Oklahoma City Bombing, after President Clinton said that “angry voices on the right” were speaking out against him. There was only one voice on the right. In 1995, I was it. There were some local talk shows, but CNN’s the only cable out there. There’s no Fox News. There’s no blogosphere. There’s no alternative media. There aren’t really any conservative websites.

Everything’s starting to blossom at that point, but this program nationally was still it four years after our founding. Clinton had blamed “angry voices on the right” for Timothy McVeigh blowing up the building in Oklahoma City, the federal building. Of course, I was livid. I was not gonna accept that. We challenged the White House on it, and they issued a “correction,” claiming, “No, we were talking about the Michigan militia short-wave radio.”

By the way, this is more evidence of why you should have no doubt I know what I’m talking about here. I have been subjecting to this liberal machine and the way it operates a number of times. I know them. I know how they lie and make things up and strategize. I know their techniques, their strategies and everything better than they do. So a cartoonist by the name of Chris Britt, I think was his name, drew up a cartoon of a fireman carrying a dead baby.

There was actually a cover of TIME magazine. This picture of a fireman carrying a dead baby from the rubble was a cover on TIME magazine. This artist did his cartoonish interpretation of it, and the fireman is thinking as he’s carrying the dead baby, “Damn right-wing radio.” Well, one of the local hosts at the time, John Carlson, on the radio in Seattle got hold of that fireman and had him on the air. He wanted to know if that’s what he was thinking as he was performing rescue duties at the Oklahoma City Bombing.

The fireman said, “No, no, no, no. We all love Rush Limbaugh. We listen to Rush Limbaugh in the firehouse.” Well, that cartoonist is back. Do you remember during the hearings Brett Kavanaugh said that his 10-year-old daughter was praying, suggested the family pray for “the woman,” meaning Dr. Ford. Judge Kavanaugh was starting to break down and tear up at that point, talking about the wisdom of his 10-year-old daughter.

The same cartoonist is back in some publication, the Illinois something, Illinois Journal or some such thing. The cartoon has now gone viral all over the web and on Twitter and some parts Facebook they love it. Switch that. Show that to people watching on the Dittocam. This is the cartoon. It has Kavanaugh’s daughter praying at her bedside. The description in the upper left-hand corner: “Kavanaugh’s Daughter Says Another Prayer.”

In the speech bubble in the cartoon, Kavanaugh’s daughter says, “Dear God, forgive my angry, lying, alcoholic father for sexually assaulting Dr. Ford.” Now, as I say, if you’re not watching the program on the Dittocam — which you can do as a member at RushLimbaugh.com — we’ll have the cartoon eventually at RushLimbaugh.com. You don’t have to be a member. You don’t have to to see it. I’m not doing this as a come-on for membership. We have the ability to show these things rather than describe them. 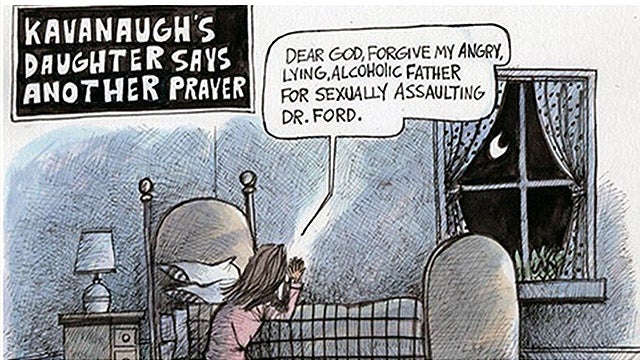 It’s the same cartoonist, 1995 to today. It’s just vile. It’s filthy. It’s dirty. It’s disgusting. It’s despicable. And it’s sick. And, of course, it has accomplished its objective! It’s gone viral, and people have seen it. People are reacting to it. I weighed whether or not to give it the attention that anything talked about by me ultimately gets, and I decided to go ahead and do it. In my never-ending quest to have people understand who liberals are — how sick and demented they are — this is what passes for humor on the left.

This is what passes for comedy. This is the kind of stuff that makes sure they laugh. “Kavanaugh’s Daughter Says Another Prayer: ‘Dear God, forgive my angry, lying, alcoholic father for sexually assaulting Dr. Ford.'” Not a single element of that speech bubble has been established as anywhere near true, and it’s just… It flies in the face of decency. You know, you run out of descriptive adjectives when trying to describe this kind of thing.

The disorders they suffer are simply said to be their political positions, and their anger is at the country or specific groups, like (summarized) “white men who need to die so that feminists can castrate the corpses and feed them to pigs.” That’s Georgetown University professor Dr. Christine Fair. These people are clearly not all there. Okay. You can now take that off of the switcher and return me to the Dittocam.