RUSH: Greetings to you, music lovers, thrill-seekers, conversationalists all across the fruited plain. I am the famous and well-known Rush Limbaugh. Not “right-wing radio talk host Rush Limbaugh;” just the famous and well-known Rush Limbaugh. And I have been doing this a long time. And that means I have a lot of perspective and I bring a lot of experience. And I’m going to share and apply it to practically everything we do today as I do each and every day.

Greetings. Great to have you with us. If you want to be on the program, the telephone number is 800-282-2882. The email address, ElRushbo@eibnet.us. Could the pollsters once again have it all wrong? Could the pollsters be mistaken or could they be lying to us? That will be my focus for the initial parts of the program today.

First, President Trump in Johnson City, Tennessee, a rally last night. Interestingly, none of the cable channels covered it wall-to-wall as they usually do, but that’s not a big deal. I had people sending me notes. “Fox isn’t even covering it, Rush! What’s up?” Doesn’t matter. These are local events, folks. They’re local events. They are intended… These Trump rallies are intended to influence local voting, local interest, local participation.

“Campaign Estimates 20,000 Trump Supporters at Massive Overflow Rally in Tennessee — Trump’s new campaign manager Brad Parscale estimated that there were 20,000 people at the rally — 7,000 inside the arena, 2,000 in the overflow room, and thousands outside. ‘Big numbers!’ he exclaimed on Twitter. Rep. Phil Roe of Tennessee said 92,000 had requested tickets to the event. Some supporters arrived Sunday night to stake their position in the line.”

“The rally was held at the Freedom Hall Civic Center, with large screens set up by the campaign for the overflow crowd. ‘Watching outside on the big screen with all these fine folks is still better than watching at home!!!’ wrote one Trump supporter…” Another tweeter wrote, “‘Trying to estimate precise crowd size was impossible on the ground, as the line snaked various ways up and down the hill, around the parking lots, etc. But I’d still place it as enough to fill at least one and probably two more Freedom Halls.'”

So 92,000 tickets requested, 20,000 people in attendance in little Johnson City, Tennessee. What’s going on here? How does that translate to any kind of a blue wave? Now, I realize it’s Tennessee, maybe Trump country and so forth. But it does not suggest that there’s any lack of enthusiasm on the Republican side. Now, let’s go to the audio sound bites, and we’re gonna start with audio sound bite No. 1 here. We have CNN sounding the alarm.

House races are tightening! CNN says there could be a GOP wave in the Senate and that Kavanaugh is energizing Republicans. The show is CNN’s Newsroom. The co-host, Jim Sciutto, was asking their senior politics writer, Harry Enten, about CNN polls on various Senate races that are within or close to the margin of error. The question: “Polls are tightening out there…” No, the question was (impression), “Oh, my God! Oh, no. Oh-ho, no, Harry! The polls are tightening? (hyperventilating) Oh, my God. No! What does that tell you? (sputtering) What — what — what’s going on, Harry?” 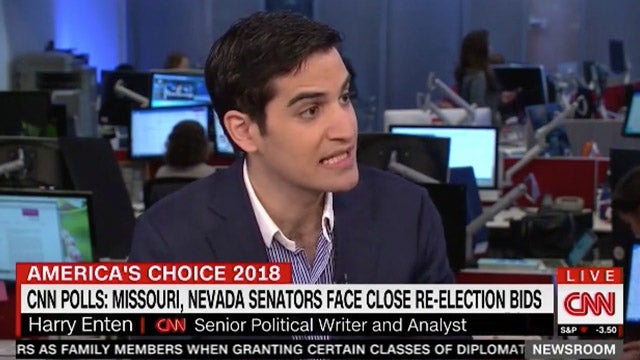 ENTEN: There are so many races that are within the margin of error.

ENTEN: Missouri, Nevada, Tennessee, Florida. The list go on his and on and on. We have all of these close races which means we have a best estimate about what might happen in the Senate come November, but it really could be a Democratic wave but or a Republican waves if the polls are off in one direction or —

SCIUTTO: (shocked) Republican wave in the Senate — in the House? (sputtering)

ENTEN: In the Senate. Not in the House.

RUSH: Republican wave in the Senate? Oh, no! That means no impeachment of Trump. Well, that means an impeachment if the Democrats get the House. Don’t think so, but if they do, it would die in the Senate unless there’s a bunch of Jeff Flake clones in there ’cause they would never vote to convict if the Republicans hold the Senate or even swell the ranks. So the paniced host, Jim Sciutto, couldn’t believe what he heard there, “Red wave in the Senate?” He says, “There was discussion of a blue wave, big generic ballot advantage for Democrats. Do you notice a tightening there as we get closer to the election?”

ENTEN: I will say the generic ballot does seem to be tightening a little bit which — 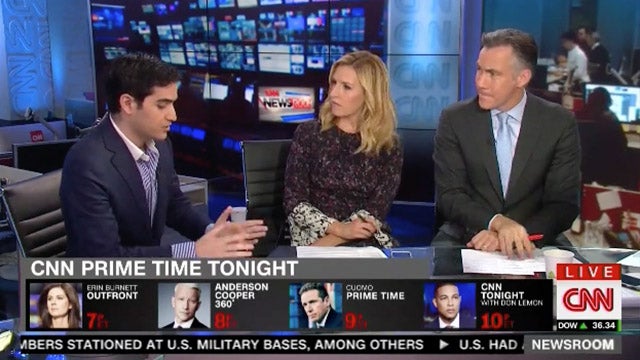 ENTEN: You know, there’s a lot of talk, “Oh, with Brett Kavanaugh and this whole confirmation mess that, in fact, that might hurt Republicans.” But it doesn’t actually seem to be so far. We’re actually seeing some tightening in the Senate races and more than that we’re seeing tightening in the House races.

RUSH: I’m gonna give you a little side observation about this. But what did I tell you? These generic ballots way back last December — that’s when they first started harping on this. Back then, you know, nine months ago, the Democrats had a 12-point advantage, and that’s when all the talk of a blue wave began. And that’s when all the talk of the Democrats winning back Congress began. And it went all through the year. The Democrat advantage in the generic ballot was 12, five, seven; then the Republicans pulled even in a couple of them.

The Democrats once again broke away. All during it, I, your host — I have been doing it in a long time — said, “It doesn’t matter. It doesn’t mean anything.” Let me remind you of a motivation technique utilized by the coach of the New England Patriots, one Bill Belichick. Prior to one of the Super Bowls the Patriots were in… They might do it frequently. I know of one time, he gathered the players for a team meeting and said, “We’re gonna have a little fun. We’re gonna watch a horse race.”

He had videotape of a horse race that nobody had seen. It was not a big race. He was gonna allow the players to make friendly bets and wagers on who was gonna win. So the players made their bets, and Belichick starts the tape of the race and stops it at the first turn. He said, “Okay, lay your bets. Tell me who’s gonna win.” Players go nuts making their choices. Tape resumes; Belichick stops it at the halfway point. “Anybody want to change their bet? Anybody want to double down?”

Players go into gear making their bets. At the final turn, Belichick stops the tape of the horse race again, asks the players if they want to make additional bets or get out of ones they’ve made. Players do what they do; Belichick resumes tape to the finish line. He makes the point, “It didn’t matter at any point in this race when I stopped the tape. There’s no way anybody could have known — at the first turn, at the halfway point, or at the final turn — who was gonna win. Yet look what you were doing. You were making bets. You were guessing. Some of you probably were certain.

“The bottom line is: Finish. You never know before it’s over who’s going to win no matter what any kind of expert tells you.” It was a motivation technique designed to get the players to realize first quarter, halftime, third quarter? Finish. Do your job. Same thing here. Polls in January in front of a November election doesn’t mean anything. Polls in June/July don’t mean anything. They’re interesting for the media which is trying to shape public with these polls, but the polls do not give any indication of the final outcome.

A poll in July or August would not have contained any of the Kavanaugh news; so how relevant could it have been? Answer: None. Zilch, zero, nada. So now here we are on October 2nd, and CNN is panicking. Races are tightening in the House. This wasn’t supposed to happen! Why, they had all their preelection polls. They had the generic ballot. They’ve had this in the can. This has been in the bank since last December. In their minds, it’s been over. It’s just a matter of letting the calendar play out. 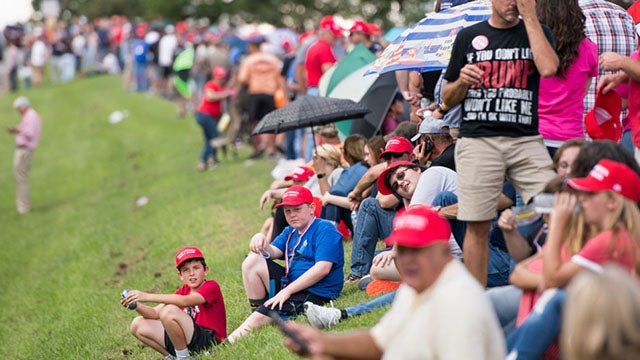 Massive crowd for Trump rally in TN. CNN panics: Polls tightening, GOP wave in Senate? Races fighting in House? Polls don’t matter right before the election. Kavanaugh smear falling apart, backfiring on Democrats. NYT prints story on Kavanaugh throwing ice at a bar in the 80s, never reported on Clinton telling Juanita Broaddrick to “put ice on that” after alleged rape. Rush encourages McConnell to take charge and he does, says vote by end of week. DiFI: Friday too soon to vote.OUT: been through inside out.

Once again, do you notice Mr. Enten snuck it in there? “You know, there’s a lot of talk, ‘Oh, with Brett Kavanaugh and this whole confirmation mess that in fact that might hurt Republicans.'” It doesn’t seem to be so far. Ladies and gentlemen, I am the reason he’s saying this and everybody else because of my viral prediction of last week that if the Republicans don’t confirm Kavanaugh that the Democrats are gonna win everything. That prediction of mine went viral. The Drive-Bys loved it!

They love it when the leader of the GOP (in their minds, me) starts ripping the Republicans. When I start predicting them to lose, that’s when I become totally credible. That’s when they run sound bites of me predicting it all over the world. You notice how easy it would be to trick them? They run with that and they run with it. Now all of a sudden, it’s just the exact opposite! It’s just the exact opposite. (impression) “Why, all of this attention on Kavanaugh and what the Republicans are doing is actually gonna help ’em? How can that be? Limbaugh just said they were gonna lose!”